Simple Minds Book; “Heart of the Crowd” Pre-Launches With Details

Posted on September 23, 2020 by postpunkmonk 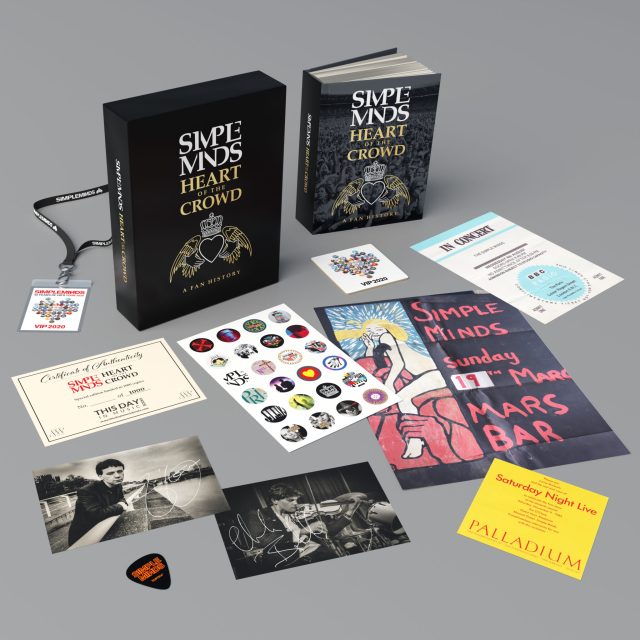 The limited edition comes with the requisite …stuff

Well, after the initial hubbub, the storyline on the new book about Simple Minds went quiet, as did almost everything in the band’s universe under the pandemic. When we first discussed the book, it was called “Book of Brilliant Things” but I’m guessing Jim Kerr realized he should call his autobio that instead, so it’s now picked up a title inspired by Magazine; the band’s biggest contemporary influence.

And the thrust of it has also apparently shifted since I was sending the editor, Richard Houghton, my submission this summer of how I came to first hear the band; which was the initial brief. But judging from the email I just received from This Day In Music Books; the publisher, it looks like the scope of the book shifted from how we discovered Simple Minds to the band’s wider impact on their fans. In short, very much like the insider/outsider history of Simple Minds like the publisher’s [excellent] book on OMD. But I missed out on the point where the book refocused, and thus missed out on giving up some more Simple Minds stories. A pity, since the 2002 and 2013 shows were powerful experiences for me. And if you know PPM, I can certainly talk about Simple Minds all day long.

At least now the book is going to press and will be available in a hardcover and limited edition boxed version; like so many books we see today. The hardcover is hefty; 572 pages and it will be published on December 5th, 2020. The price for the hardcover is £45.00/$58.00 and I’ll have one of those in my sights, for certain. As I said, the OMD volume was immensely readable, and a treat for this fan. I expect no less from this one. The limited edition is the deluxe model. It ships for £85.00/$110.00 and has the following bonus tracks:

All very detailed, but I only have room in my house [and budget] for the basic model. If a thick and zesty history of Simple Minds also has your name on it, then by all means click the button below and snag a copy for your own music library. There are only a thousand deluxe editions so act fast on that if you need one.

6 Responses to Simple Minds Book; “Heart of the Crowd” Pre-Launches With Details