Posted on September 28, 2020 by postpunkmonk 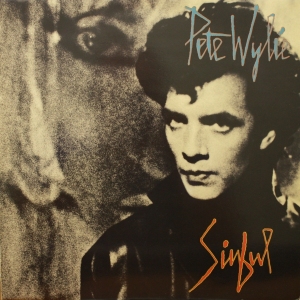 I’d read a bit about Pete Wylie in the early 80s. Much of it about his roots in the “Crucial Three;” Liverpool’s fountainhead band from which Ian McCulloch [Echo + the Bunnymen] and Julian Cope [Teardrop Explodes] and Pete Wylie emerged from. Wylie, who made music under a bewildering array of WAH-oriented names. I managed to hear the sounds of Echo [hard not to in America] and even Teardrop Explodes, but from 1981 to 1984, I never heard the first note of Wah, Wah! Heat, The Mighty Wah! or Shambeko! Say Wah! on the radio or TV. This guy had as many monikers as Kevin [Spizz] Spears! That might have been one of the issues that kept his music out of my ears. 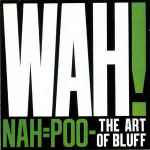 It was hard to take this title seriously…

I had managed to see the occasional import copy of his debut album but the title, “Nah = Poo – The Art of Bluff” was very off-putting to me. I didn’t want to gamble import costs on such a silly sounding record. I remember first actually hearing him on MTV’s London Calling program where about 30 seconds of his hit “Come Back” got an airing. Now that sounded pretty good, so I perked up but then went back into my Wah! coma for another three years. Maybe the fact that none of his recordings, until this album, were issued in America had a part to play in the mystery of Wah. Thankfully, when confronted with a US CD of “Sinful” I jumped in and took the gamble.

As my first exposure to Wylie, the song “Sinful” probably couldn’t have been bettered. It burst from the starting gate at full pop gallop; driving right into the expansive chorus. The vocal arrangement divided between an exuberant Wylie and Josie Jones wove a complex but winsome melody that danced between the pulsating synthesizers. Ian [Deaf School] Ritchie’s c0-production with Wylie was au courant, but not overbearingly so.  The instrumental middle eight spoke of a rarely glimpsed Philip Glass influence with the sampler getting minimal/serial before Pete’s guitar made an appearance on the back end.

The production gumbo on this album was Wylie with Ian Ritchie, Zeus B. Held, and Michael Frondelli but there are no obvious seams. It all gels pretty well to the point that the Ritchie produced “Break Out The Banners” sounded for all the world like a cut from Held’s zesty production of Transvision Vamp’s “Pop Art” album [from two years hence] right down to the zingy guitar distortion over the booming drum machines and kinetic synth sequences.

Most of the songs here had Wylie emoting at full power as he didn’t seem to be to interested in moderating his vocal force. The third single, “FourElevenFortyFour” was a rare exception that allowed Pete to start out modestly and he only built up to a head of steam halfway through the song. I was taken aback at first with the delicacy of the opening couplet, which was repeated twice.

“My love is a rainbow,
and my live is falling grey rain” – “FourElevenFortyFour”

But by the halfway point he was once again singing from the diaphragm with most of the power he could muster. He seemed like he didn’t have the time to dilly-dally with subtlety.

The first track as produced by Michael Frondelli was the second single “If I Love You” and it was a heartfelt love song of bold and inventive declaration. Here was a musician who not only believed in the power of love, but also the power of pop music itself. And he was equally passionate about either one. When he put the two together, it didn’t seem like anything could stop him from reaching his goal.

“We Can Rule the World” began deceptively, using the Conch sample [Zeus remixed this Ritchie track but also used the same seample on his Simple Minds “Ghostdancing” remixes of the same year… fyi] that quickly became a Fairlight cliché juxtaposed against some lightweight ambience but fortunately, the song became grounded once the urgent motorik beat moved it out of New Age land and firmly back into Wylie territory. The chorus laid it all out for us and the vision was huge and bold.

“You and me, kicking planets
You and me, skate on rainbows,
You and me, a thousand miles away” – “We Can Rule the World”

And Wylie’s evident passion absolutely sold such a lyric. This was the longest song here at 5:45, but it felt more like 3:20. Not one minute of our time was wasted here. And when it came time to end the album, he once again cut to the chase by opening up “All The Love” with the song’s chorus. Every inch of that song was packed with Wylie’s idealism and optimism. If anything, this  album was antimatter to cynicism itself.

In the wrong hands, it could have spun out of control and become overbearing, but the caliber of songs and arrangements insured that it far from overstayed its welcome at under 36  minutes. This had been a fine introduction to the world of Pete Wylie. His obvious belief in the redemptive power of pop itself marked him as a true believer in the form, and not to be discounted. At least in the case of “Sinful,” the song was one of his UK top 20 hits and was one of the intermittent instances where his passionate pop clicked with the British audience. The other two singles here were tragically scraping in near #80 on the charts in a case of pearls before swine.

Echorich told me that it was designed to specifically look like a bootleg!

Unfortunately, it was at least two decades before I ran across a second Pete Wylie/Wah! CD. And that was only two years ago when I saw “”The Maverick Years ’80-’81 […and Then Some]” and grabbed it after asking Echorich if it was really a bootleg or not. While this was priced to move, all of the other Wah! CDs I see on the web all hover at half a C-note or higher! With the exception of his recent “Pete Sounds” which is available on his website, directly at popular prices. At least he has the music on the OOP CDs covered there as DLs as well. And there seem to be four volumes of rarities that look to makeup a lot of tracks, though the store asks that we email to see the contents. As shown below.

At the very least, I need to focus my finances to get his latest CD before it’s too late.