Posted on August 4, 2020 by postpunkmonk

Waaaaay back in 2004, I made a Claudia Brücken CD that compiled most of the remixes from her then last album; 1991’s “Love: And A Million Other Things.”  It had the hard to source “Bastille Mix” of “Absolut[e]” and a pair of Razormaid mixes that were in house. “Fanatic [The Nail In My Soul]” and “I Can’t Escape From You.” It did the job it needed to do, but six years hence, Cherry Red came out with the ideal DLX RM of “Love: And  A Million Other Things” that wrapped up everything in a nice, tidy bow. There was not much reason for this comp to have a continued existence…unless one looked at the other music I’d gotten from Ms. Brücken since 2004 that had no central home as of yet.

I decided to revisit the comp earlier this year and kick it into the future with a new compilation of loose tracks that needed a home for easy listening. I’d gotten a lot more Razormaid mixes since then. I stumbled onto the issue with “Dr. Mabuse” and this needed a home! I managed to render the track serviceable thanks to Click-Repair. I had put the 7″/12″ of the single that Brücken had recorded with Glenn Gregory on the Heaven 17 BSOG I’d [re]made in 2009, so it made sense to also deposit the vinyl-only tracks here.

One of the major items I’d bought in the ‘noughts was the White label promo 12″ of “Snobbery + Decay” from Act with four remixes that weren’t included in the awe-inspiring 3xCD BSOG of “Act’s “Laughter, Tears + Rage – The Anthology.” The mostly instrumental mixes were minor mixes, heavy on the Latin percussion, but still pretty scarce on the ground.  I spread these into the disc; avoiding the problem of “remix clumping.”

I was checking the Discogs.com database on Claudia Brücken; making sure I didn’t miss anything that didn’t immediately come to mind, and was severely embarrassed to find that I had a Brücken “buried treasure” in my collection for at least 30 years!!! I really love collecting Claudia Brücken. I have many pressings of “Snobbery + Decay” to my name. To wit: 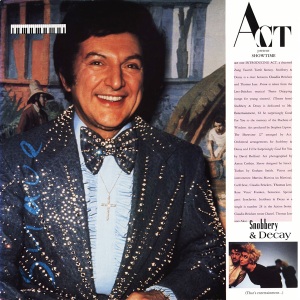 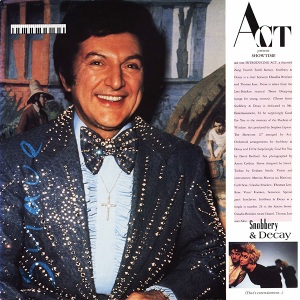 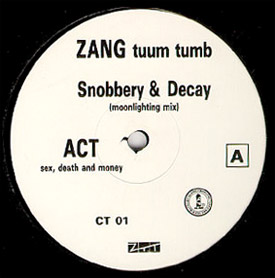 I’ve had the CD-5 since it came out. Around 1990 I bought all of the UK commercial 12″/7″ variations from a catalog. Because. I never played the vinyl remixes more than once upon buying them. I was waiting to make my own CD which never happened due to the Anthology box of the album which collected 95% of these mixes. I never played the B-side of “Poison” from anything but the CD-5/album CD. The album had a version of “Poison” identical to what was on the CD-5. 12 XACT 28 had a labelled remix of the B-side, called “Strong Poison.” I played that a few times.

What I didn’t know until 2020 was that the other 12″ records had a unique mix of “Poison” which I now duly digitized and included in this compilation. My embarrassment levels were off the map for this one. Again, when I play records [which isn’t often, it’s true…], I make sure to digitize each track on the server in at least raw form so that I don’t miss anything. But I had not played these tracks yet and thus was in the dark. 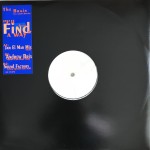 I had a German white label 12″ of “I’ll Find A Way” with three mixes by The Brain, which reunited Claudia and Michael Mertens with The Brain. Two of the mixes were trance mixes, but the Andrew Brix Variable Club Mix was more my style, and it found a berth here. I had also originally included the very trancy “Jam El Mar” mix, but a late in the game realization that  I had another Razormaid remix to include motivated me into shaking up the track listing late in the game. 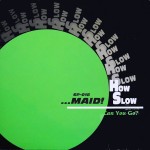 In 2016, I’d bought this record, and had not played it since buying therefore it had not imprinted itself in my mind. The knowledge of which eventually jolted my senses into swapping out the 11 minute trance mix for the 7″ of “When Your Heart Runs Out Of Time” and this Razormaid remix of “Kiss Like Ether,” One of my all time favorite Brücken songs. I had almost forgotten that I had the “Absolut[e]” Razormaid mix up front in this revisit, but to forget this was just highly embarrassing! 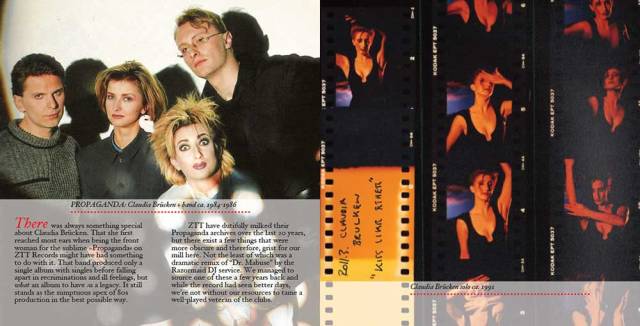 My next step was to take the cover from ca. 2004 1-sided insert to how I like to roll these days. Full booklets and liner notes are de riguer! Ms. Brücken hosted a plethora of excellent promo shots [many not used but very cool] on her website. So these were a welcome sight. With the lineup changing several times as I worked my way through re-compiling this one, I had to re-do the liner notes each time, but at last it’s finished!

The back insert was pretty perfunctory from 2004. Something I threw together in 10 minutes with the single sleeves on it.  I used the great B+W shots for the planned but never made sleeve for “Fanatic [The Nail In My Soul],” which only got a french promo 7″ release in a generic Island sleeve. These were too good not to use with Ms. Brücken sporting a triangular eye patch; looking very bauhaus. So vVolume 1 of “Comprehension” is done. As I get more Brücken rarities, I can just craft more volumes until such time as I may compile them all into a box. I have enough loose tracks and DLs of digital only-music for at least another two right now.