Posted on August 5, 2020 by postpunkmonk

There are some albums that just take my breath away with the ease in which they tear up rule books and create coherent worlds within their grooves. Brian Eno’s first album, “Here Come The Warm Jets,” is one such album. In 1981 I was aware of Eno’s reputation. I knew he had been an early member of Roxy Music, but had yet to experience those first two albums. By that time I certainly had many of the classic albums that he had produced; “Ultravox!,” “More Songs About Buildings + Food,” “Q: Are We Not Men? A: We Are DEVO!,” “Fear Of Music,” and “Remain In Light” all come immediately to mind. But I had heard none of his solo material, apart from his “Ambient II: Plateaux Of Mirror” with Harold Budd when chasinvictoria bought it in late 1980. As we knew of Eno’s reputation, that one blindsided us at first before we grew accustomed to its modest beauty.

I was listening to WUSF-FM’s amazing Friday late night New Wave ghetto radio show that exposed me to numerous wonderful artists, when I chanced to hear Eno’s track “Baby’s On Fire.” I could barely receive the signal 80 miles away in Orlando, but the show was good enough to be taping even with severe FM static as the low poser signal struggled to reach my ears. Stunned, I listened to that tape many times afterward and I think that I dubbed a poor sounding copy of the song and sent it to chasinvictoria on one of our marathon tape letters we used to send when he had moved away from Orlando after graduation.

It was shortly afterward when he sent back a C-90 with “Here Come The Warm Jets” on one side and “Taking Tiger Mountain [By Strategy]” on the other. We were now fully Enocentric! When “My Life In The Bush Of Ghosts” was released in spring of 1981, it was an event. We went back to look into those Fripp + Eno albums that were so intriguing. It was my graduation present to myself in 1985, when I bought the then new “Brian Eno: Working Backwards 1983-1973” boxed set of god with 10 solo albums and an EP of rarities [half unreleased] for the then astounding price of around $120 if memory serves. “Music For Films Vol. 2” was exclusive to the box, as was the EP. Well, one doesn’t graduate college every day. All of this music was fascinating, but it all had a starting point, which had been the utterly amazing “Here Come The Warm Jets.”

Drop the needle [or laser] on this album and “Needles In The Camel’s Eye” bolts startlingly from the gate on the one; as if it were already in progress and you were just catching up. The mix [by Eno and Chris Thomas] was dense with elements jostling for sonic position with Eno’s multi-tracked vocals mixed at a similar level with everything else. It seemed muddy due to the indifference to separation and more concerned with the overall gestalt of its impact, which was profound. This was 2:45 that grabbed you by the lapels and pulled you along for the joyride. There’s a reason why Todd Haynes chose this song to open up “Velvet Goldmine” with scenes of glamrok teens running wild in the streets in a frenzy of velocity and barely contained energy.

The twin guitars of Phil Manzanera and Chris Spedding compete for the spotlight with what I’m assuming was Manzanera filling the song with atmosphere and rhythm droning while Spedding proffered twangy, Duane Eddy licks that seemed beamed in from another universe. Eno was on record as having spent as much time composing the free-form lyrics as he had singing them, so this resulting song was simply a thrilling exercise in form for form’s sake. But that would be Eno’s tactic throughout his career. For an artist as indifferent to lyric content as he was, it’s not altogether surprising that he eventually went on to eschew them altogether for many, many years. The drum breaks where the song dropped out entirely for a bar at a time in the middle eight was just a case of Eno having some exhilarating fun on his first ever album of Rock music.

The second song was completely different. The mannered delivery of Eno in the plumiest of voices over the splendid, yet hardly eccentric music bed was a far cry from the exhilarating start that “Needles In The Camel’s Eye” had been. But given the bizarre subject matter of “The Paw Paw Negro Blowtorch” perhaps discretion was the better part of valor? Once Eno got to providing the synth solo on the middle eight, all bets were off as the song suddenly went “off road” in the most left field way possible. The solo sounded like a gleefully cheerful dolphin making random notes that bent in every direction that shouldn’t have worked as a solo save for the expert syncopation of the notes attack with the rhythm of the song.

Then the song circled back to a return to its main themes with some berserk rhythm guitar slathered with distortion effects as Eno climaxed the song  with his curiously lilting, double tracked harmonies. Leaving the song to fade on a synth loop that segued right into the next song. And what a song! The synth loop gained tension with some cymbals before the song stopped momentarily for a beat, to allow Eno to begin singing the incomparable “Baby’s On Fire.” And he sang in the most aggressively nasal phrasing possible; simply dripping with vicious contempt. The song was breathtaking for its aggressive pose… and that was sufficient to be riveting… but then Robert Fripp began his guitar solo. 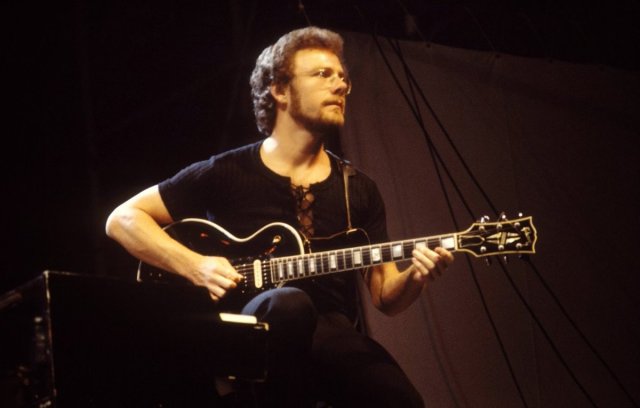 On “Baby’s On Fire,” Robert Fripp provided perhaps the only guitar solo you’ll ever need.

Not just any guitar solo, but the most face-melting guitar solo ever committed to wax! He kept up the aggressive pressure for a full three minutes while Eno kept the energy of the song flowing beneath the torrent of guitar like an underground river. The palpable hostility of the solo is beyond anything else I’ve heard on guitar. Legend had it that Eno directed the musicians playing on this album by movement and interpretive dance. One could barely imagine any human movement translating into this solo, that sprayed the listener with flecks of white-hot spittle; halfway on its way to steam. After the three minutes of Fripp pulverizing the listener, Eno returned for the last verse but wisely giving the last word to Fripp who ended the track with one last strangulated burst of his devastating guitar.