Posted on November 1, 2019 by postpunkmonk

I first heard Renegade Soundwave back in 1987 [I believe] on an episode of the British TV program Snub TV that was shown on Night Flight one weekend. I could always count on interesting things on Snub TV. They showed the video for their single “Kray Twins” and I was immediately smitten with the apocalyptic, industrial hip hop on the track that was dedicated to the notorious British gangsters of the Swinging London era. Huge slabs of the hardest beat I had ever heard definitely made my Cabaret Voltaire nerve twitch. This track just sounded so immense and threatening that it could flatten the listener, but this was among the early records made strictly with sampling. As it turned out, that was the métier of Renegade Soundwave.

I looked for that song on CD for a few years before finally finding the UK three-track version of the single above. It lacked the dub mix of “Biting My Nails.” So I originally bought that one first, in 1988 as an import. The CD5 was an EP of the first three single A-sides from Renegade Soundwave but as long as I would get “Kray Twins” I was all in! “Biting My Nails” was a groovy confection of sample-a-delic funk that had the good taste to bite the first three notes of the famous “Knock On Wood” boss horn riff from the Eddie Floyd 60s soul hit for its own mojo.

What I didn’t now at the time was that the song was a cover version. In fact, the fact that I’ve only just stumbled across this knowledge was what put this disc in my consciousness, and therefore, on this page today. The song had originally been released as a B-side to a single in 1974 by Geneviève Waite; the then-wife of co-writer “Papa” John Philips. The original was a horrible novelty tune; a ten-years-past-its-sell-by-date ye-ye pastiche from hell. An unholy alliance of Serge Gainsbourg and Betty Boop! So kudos to RSW for taking this track to a much better place. I can’t imagine where they got the idea from, though.

The other single on this EP was the sordid and ugly “Cocaine Sex,” which was such an inflammatory title in 1987, that the 12″ cover didn’t even list the title! The back cover coyly noted that the record contained “C.S. [sex mixes].” The samples of females groaning in simulated ecstasy from porn movies only added to the gutter filth vibe that they were obviously targeting.  I give this one a pass. It’s so not barking up my tree. While it’s not the most offensive track in my collection [that would be “Bring On The Nubiles”] it’s close enough to never want to hear this either. 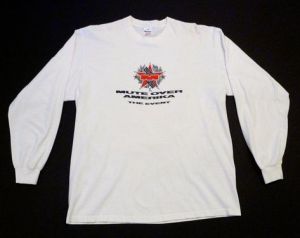 I later re-purchased the 4-track US variation shown above which had an instrumental dub mix of “Biting My Nails” which was decent enough. That was at the time that the US indie label Enigma Records had linked up with Mute to distribute a lot of their catalog in America. I gave the original 3-track CD to my friend Jayne, who I traveled with to actually see Renegade Soundwave live. Twice in one week! I think that was the first time I ever did something like that, but in 1991, Mute Records [who had signed RSW] held what was called the “Mute Over Amerika” tour which featured a mix of Renegade Soundwave live, DJ Derrick May, and various Mute music videos in a club tour. So I got to get right up to the stage and hear the likes of  “Biting My Nails” pummeling my skull.. I can’t remember if they played “Kray Twins” but I sure hope that they did. I have no recollection of May at all. In fact, I had to look up what the other tour features were as RSW only played for about a half an hour as I recall.

We drove to Tampa to see the opening night of the tour at The Ritz on April 18th, and that one we bought tickets for earlier. Then the tour was announced as coming to Orlando on the fly, so the next night we probably went to Visage [my ticket stubs are at home now] to see them again; buying tickets at the door. So yeah, we actually saw Renegade Soundwave twice. Even in Florida! I only ever bought the “Probably A Robbery” UK CD single, but it never excited. “Soundclash” was oon my list but never purchased. This EP probably has all of the RSW I actually need. And even then, it’s too much by half in the case of “Cocaine Sex.”