Fay and Eugene will be returning to their rightful place in record stores next month!

Just a few months after our look at the surprising return of the Revillos when we least expected them in the mid-90s, comes new word of two new Revillos projects coming our way on the shiny silver disc…as well as the zombie vinyl trend. The first of these projects is a refresh of the Revillos 1995 album “Live + On Fire In Japan!” The original album had been recorded [wisely] on the Revillos Japanese tour which had the effect of removing them from the freezer for the first time in a decade. That album was 15 tracks taking in both Revillos albums, some stray singles, as well as one or two Rezillos classics for good measure. It’s getting not only a reissue but also a re-thinking.

Compare and contrast with the earlier 1995 version.

So the new album has a full six songs more to replicate what must have been the full gig. The running order has been re-jigged to replicate the original running order. But the biggest difference was in the studio. Drummer Rocky Rhythm has said that the original concert had been recorded to an 8-track mobile studio at the time. Not optimal with six people on stage already with four vocalists, drums, bass, organ, and ambient crowd making for a tight recording session. The mix that made it out was viewed as a lost opportunity.

Kid Krupa [r.i.p.] at your service

In the interim, twangtastic Revillos guitarist Kid Krupa had become a producer and had plunged into the world of digital audio workstations. Using the rediscovered original mixes and various sources, began the painstaking task of re-creating the show in full with all of the drop outs, etc. fixed up using modern digital whiz-bang. And he might have done a smashing job of it had he not died in 2005; leaving the job unfinished. Until it fell upon Rocky Rhythm to complete the task after finding Krupa’s backups and tackling the work himself. The new master is the original full Japanese concert that re-activated The Revillos for several years in the late 90s. The LP [red vinyl] cuts three songs for reasons of running time. Prices are a sensible £9.95 [$12.90] for CD and just 50% more the the format that delivers less music. Pre-orders available HERE. 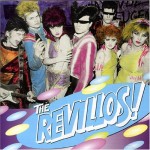 As if that weren’t enough, Revillos fans may remember the eclectic and delightful “From The Freezer” compilation that emerged in 1997 to my sheer delight at the time. That CD was an odds + ends compilation of 20 tracks in live, demo, or simply strange form taken from the band’s archives. Now, 22 years later, the sequel is coming out! Before his death, Rocky Rhythm and Kid Krupa teamed up to have another go at the archives and found more material where familiar songs were recorded in radically different forms and became intrigued by the possibilities. Between Krupa, Rocky Rhythm and bassist Vince Santini the songs have been polished to the extent that they could with assorted dropouts being attacked with digital hammers and mallets. And now they are headed our was on the two popular disc formats on November 15th. The cover looks a little familiar… 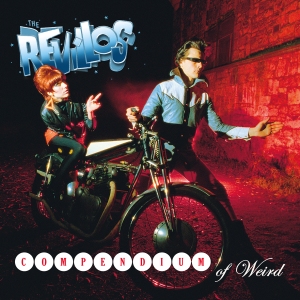 Wowser. All of the new song titles are in red, so that’s ten new songs unknown to us, and seven classics in radical form. I’m guessing that “Do You Love Me” is The Contours hit song. “I Wanna Be Your Man” was the Beatles cover that was the B-side of the debut Rezillos 7″ from 1977, so that’s very technically, an eleventh new Revillos song. Prices? Very fair! Just like the live album with this time the [yellow] vinyl lacking just two of the songs. Preorder HERE.

My biggest question will be: do I get the LPs as well as the CDs? They’re not expensive, but my money is super tight. They may rise in cost on the aftermarket so buying fresh goods directly from the label looks like the safest bet. I have a reasonably expansive Revillos/Rezillos collection. I have bought vinyl I didn’t need just to make my collection of these fine musicians as vast as I could. And the kicker is that there simply isn’t that much of it out there to buy! A complete Revillos/Rezillos collection is a less than herculean task that I can get fully behind, in theory, anyway. But the CDs will be $30-ish after shipping. The LPs will add nearly $40 [plus much more shipping] to the notion. Hmm. I think I just answered my own question.

2 Responses to Want List: Twin Helpings Of Revillos Goodness Arrive In A Fortnight!