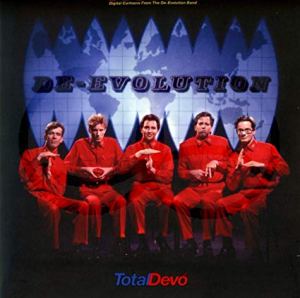 I was slightly late to the ball when DEVO released their “Total DEVO ” album in 1988. I did not buy it immediately, due to the pall still cast four years earlier by “Shout.” I had seen the “Disco Dancer” clip on 120 Minutes and was not convinced. Also, their drummer Alan Meyers had jumped ship following “Shout” and was replaced by David [Sparks] Kendrick. Truth be told, it hurt seeing DEVO sent back to the rookie leagues of an indie like Enigma Records with a low budget for their all important video. Not as much as it hurt the band since unbeknownst to them, Enigma was a sinking ship still barely aloft on ill gotten gains from their Metal Blade distribution.

I didn’t buy a copy of “Total DEVO ” until a year or two later, and [most importantly] missing a DEVO show touring behind the album the one time I could have seen them in Orlando at Visage nightclub! When I heard how good the album was, I then regretted my decision to blow that tour off. It’s not as if “Total DEVO ” was the next “Duty Now For the Future,” but at least to these ears, it sounded like the next “New Traditionalists.” I liked the tunes and the arrangements had more guitar that I had gotten from “Oh No! It’s DEVO !” or what I’d heard at that time of “Shout.” Mark Mothersbaugh may have wanted to clear all guitar out of the band, but as far as I was concerned, it was an over reliance on synthesizers that had blanded their sound down in ’82/’84. This sounded more interesting to me.

I bought the CD singles and there it’s been until this year when the DEVO mailing list announced the 30th Anniversary DLX RM of “Total DEVO ” in what looks to be a fairly authoritative 2xCD edition. Of course, It’s also available in multiple shades of colored vinyl for those who have to have everything. Homey don’t play dat! I wonder how authoritative it is? Let’s find out! 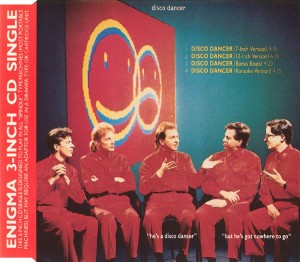 The original CD had a bonus track, an alternate version of “Some Things Never Change.” That’s there, so “check!”

Okay, so the first chink in their armor is showing. The 7″ version of “Disco Dancer” is not there. Not fatal, but there’s all of that space at the end of  disc one. Myself, I’d rather have the original album on a disc jammed full of everything rather than lose cuts that should be there due to the idea of protecting the “integrity” of the original album! 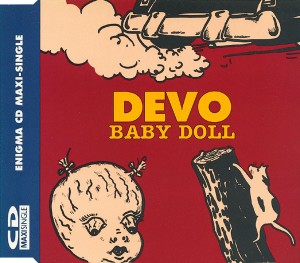 Hmm, A hefty three tracks missing from the package here. Instrumental, percapella [has anyone ever actually cared about one of those?], and DEVO single mixes are missing. Interestingly enough, there is a 6:05 “dub mix” on the DLX RM not on that CD5 and it’s definitely not the 3:40 percapella mix, but I dug and found it here: 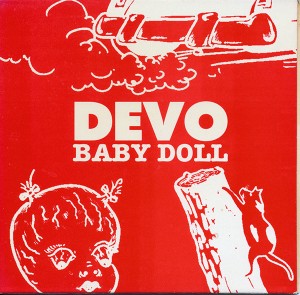 Darth Vader sez’ “…most impressive.” That showed attention to detail. Especially since that disc is going for a strong two figures on Discogs right now. I’ve never heard this cut. 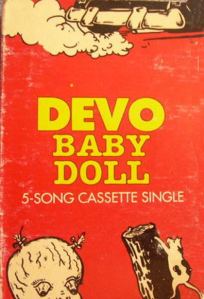 Let we forget, there was another popular format in 1988. The cassette single had an instrumental version of “Baby Doll,” and as we strive for Monastic perfection, we call out its absence! And off the top of my head, I remembered one more rarity that was definitely missing here! 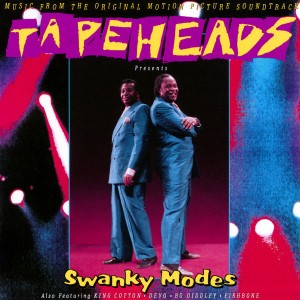 Fans of the cult film “Tapeheads” will know what I’m talking about! One of the more amusing gags was having a Swedish version of “Baby Doll” by DEVO inserted into the movie to have a [deserved] good laugh at Eurokase Synthpop. I really miss this track. 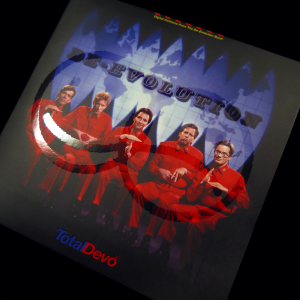 So spuds who are interested in this DLX RM will, like me, be buying it for the hefty five unreleased bonus tracks in lieu of the missing mixes. The 2xCD has my name on it, and the new cover design with the alternate photo is a big step up, in my opinion. The CD, as does the LP version, comes in a gatefold cover enhanced with spot varnish, so obviously, no expense was spared! There is also a poster [folded pretty small in the CD, admittedly], and some postcards thrown in. The official store at ClubDEVO.com is sold out of all versions, but the Futurismo site still has the all important CD for £17.99 [a.k.a. $23.23] here. Act fast or…you know how it goes in these dark days.