This has been in the mental queue for over a month, and we’re finally getting around to posting on it! The last time we were in Atlanta, we did some serious shopping  at Wuxtry Decatur. By “last time” I don’t mean last weekend when we saw Graham Parker, but April, when we were taking in OMD! And it almost didn’t happen. Sure, sure. I mapped to it from our lodgings, but I was ambivalent and had to let my wife talk me into stopping in on the way out of the city after seeing OMD. Good thing too, as we had not been in the store since October of 2016, when catching Midge Ure in a dive bar. 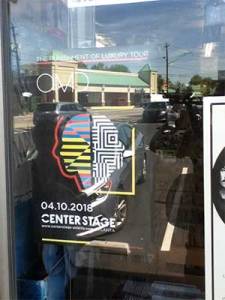 My wife thought to ask for the now ex-post-facto OMD show poster!

I am technically trying to save up money for the Ron-Kon II trip to Los Angeles in July, when all of Ron’s buddies will be on a memorial record store crawl that will no doubt fill pages at the blog after it happens, and shopping at Wuxtry, no matter how lovely, is something that happens far more than any trips to the West Coast, which to date number one. But this was a very gratifying store to shop in, that’s for certain. My wife spied the OMD poster in the window and since it was the previous night, she reminded me to ask for it. Man, I never think of this, but whenever we see a gig, she goes for set lists and posters like the pro she is. We entered the store, asked for the poster [no prob] and proceeded to shop. my wife and I divided to conquer the store much faster.  She has been on a soul/funk/R+B kick of late and this would be a very productive visit.

Always a pleasure to see this one

As usual, we first went through the dollar bins outside of the store because the last time was so fruitful. I was happy to see a UK Dead Or Alive 12″ in a generic sleeve and my wife [who just got me Neneh Cherry’s “Homebrew” on CD a few weeks earlier, held up the “Kisses On The Wind” US 12″ and I told her “yes!” I only had the UK CD-3 from 1989 and was ready for the 5-6 other mixes not on that digital trifle. I got the Malcolm McLaren “Paris” 2xCD and an Ultimix DJ service 12″ with a mix of ABC’s “The Look Of Love.” Fingers crossed on that one, but it was only a dollar. A copy of Voice Of The Beehive’s “Honey Lingers” is always welcome and can find a new home later.

I then hit the rock CDs while my wife moved to the R+B CDs. I found the first Sylvian/Czukay CD that I still needed. Come to think of it, it was on our last trip here that I finally got “Plight + Premonition!” Surely not a coincidence? Having seen the wonderful Go-Betweens documentary recently, I was very excited to see the 2002 DLX RM of “Spring Hill Fair;” my musical point of entry to the band and priced to sell this morning. I finally indulged in some Blondie I had held off on for ages: “The Hunter” and “The Curse Of Blondie.” The former I had not owned since the Great Vinyl Purge of ’85. The latter would be my first Blondie album from the reunion era that I was skittish about. Gulp!

My wife was doing some serious pulls in the R+B CDs; racking up more CDs than I was grabbing. She would float names like Cameo and for the likes of them, I was more than ready. She was also digging deep into soundtracks. I tend to exclude them from my shopping, even though I know that they are potentially filled with rare tracks by bands that I collect simply because the effort of seeing their contents takes much longer than scoping out an album or single release. And she had quite a stack. 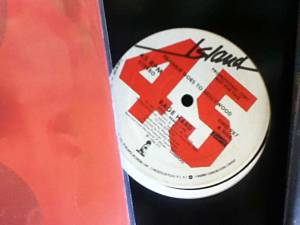 I was happy to see the new Goldfrapp release. Now I had all of their albums, except for the problematic “Head First” since I’m not exactly nostalgic for reliving the golden era of Olivia Newton-John.  I finally got the “Dylanesque” CD by Bryan Ferry. I’ve had the DVD of that title [which I watched when home sick one day!] for many years, but lagged behind on the album itself. The Lou Reed debut CD was not a title you see new or used, and the used CD was priced well above the usual $3.00-$5.00 range here: $11.99, but when had I ever seen this? “The Good Son” was a Nick Cave title that was a must since my wife spent plenty of time watching the video for “The Weeping Song” online last year.  Yow! They also had the US 2xCD edition of “Good Humour,” my favorite Saint Etienne album! I also found in the CD single section [did I mention that I loved this store?] the last Cocteau Twins single I needed to finally complete my collection. “Violaine” CD#2. Getting those last two only took 22 years! Eventually, I moved to the vinyl while my wife took a breather and got a chai nearby.

The 12″ stock here was rather good, if you have the Monk’s eye for import singles. “Careless Memories” is always a good sign in the bins since it was never issued in America. Our New-Ro canary in the coal mine, as it were. I was amazed to find the UK 12″ of “Buffalo Gals” by Malcolm McLaren; an artist I’ve been buying everything that I find from in the last few years. I had no idea of what any remixes of that track might sound like. I was excited to see the Freddy Bastone Island US promo mixes of FGTH’s “Rage Hard” actually in a store. That had been on my Discogs want list for so long I had grown weary of seeing it my feed, but never at just $3.00. Well, now I could buy it and cross it off the list.

There was some highly gratifying vinyl here!

I was thrilled to see the UK pressing of The Tourists’ “Luminous Basement” replete with hype sticker [and presumably the bonus 7″…] but I already had this one. As well as the reformatted US edition and [clutches heart] the 1997 JPN CD pressing of this, which Discogs tells me has overtaken my JPN “Doctor Mabuse” CD-3 by Propaganda to become the most valuable disc in my Record Cell. But who cares about Tourists albums I already own nine ways to Sunday! The John Foxx section here was crazy-sick with vinyl I needed! The first two John Foxx + The Maths albums with deluxe Jonathan Barnbrook gatefold covers as well as the John Foxx + Jori Hulkkonen “European Splendour” EP that I didn’t own in any way, shape, or form! Scandalous, I know. What a shopping trip this had shaped up to be.

I was waiting for my wife to get back so we could do any pruning before checking out. This was shaping up to be a very big outlay, but the selection and prices were in a “perfect storm” this day. I barely put 2-3 titles back, and my wife did the same. At the prices on offer, we’d be setting ourselves up for some serious regrets down the road. I could not wrap this up without mentioning, even in passing, that I was fairly blown away by the deepest bin I saw in the store. Was it Bowie? The Cure? Duran Duran? The Smiths, or some other college rock royalty? Hardly! See at left the foot and a half of…Petula Clark albums! Positively dwarfing the paltry Clash section next to it. Egads. Who knew? My wife sagely pointed out that there were a lot of gay men in Atlanta. But of course! She’s a sharp one, my wife.

Woah! When does one find one of the few Was ( Not Was) 12″ers out there… and signed by Don Was, no less?

As I checked out the manager and his second-in-command pulled the CDs, which were out-of-jewel-box. The manager noted that the “Robot Girl” UK 12″ was signed by Don Was in blue Sharpie®. Sonnuvagun. He was right. I just saw the cover and pounced. The store sagely threw in all of the dollar items as freebies. Appropriate when the tally came up to 200 smackers. Not your usual record store visit. I’ve spent this much in one store twice before. Amoeba Hollywood in 2014 and Yesterday + Today in 2002. Truly, Wuxtry, Decatur is right up there in the pantheon of Great record Stores. Here’s the list. Now you know why there wasn’t a follow-up trip there last Monday!