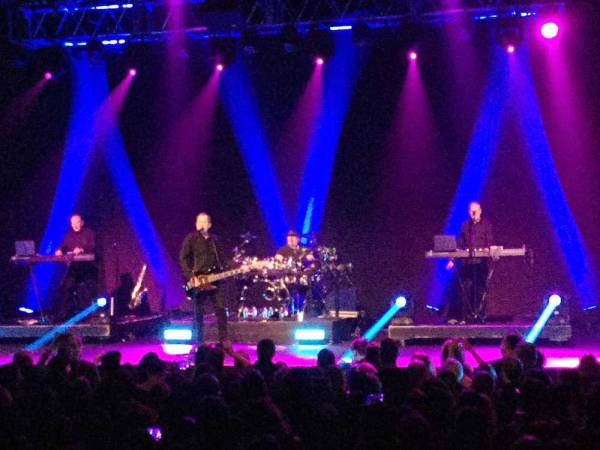 Last Sunday my friends phoned me to tell me that they would not be making it to Atlanta for the long-planned OMD show. Well, this sort of thing happens. I posted the extra tickets to the blog on Sunday after hearing that and maybe someone could use the tickets. I had tried to give them to friends, but no takers. We drove to Atlanta on the scenic route and checked in to our Inman Park lodgings. After a rest and refresh, I was in my classic OMD “look” for the show [black slacks, white shirt, and OMD tie.] Yes, I’m that big a geek! When we were getting ready to step out for dinner beforehand, I received a notification on my device. An email arrived from the blog contact form from Darlene asking if I still had the tickets. Since I had them on the blog for almost two days with no bites, on the drive there, I had decided to let them go for less than cover if anyone wanted them. I emailed back to Darlene and gave her the nod. We would meet prior to the show for the exchange.

My wife and I had a lovely dinner at Ecco beforehand and arrived to have time to find our general admission seats. Center Stage was a nice large room with a 1100 capacity; much of it seated. When OMD had played in Atlanta in 2011, they had played The Loft, a smaller concrete bunker attached to the Center Stage facility for medium sized shows. We were packed in there tightly, but I’m not sure if it was sold out or not. This evening, OMD had reaped the spoils of frequent touring in America since reforming. The opening set on the huge Barenaked Ladies 2016 summer tour [and strong, vital albums] must have paid off. They had sold out Center Stage that had double the capacity of The Loft. I had last seen a show at Center Stage when seeing my first Cocteau Twins show on their “Heaven + Las Vegas” US tour. Darlene would meet me at around 8:15, once she traveled from her point of origin in one of Atlanta’s many bedroom communities that litter its margins. 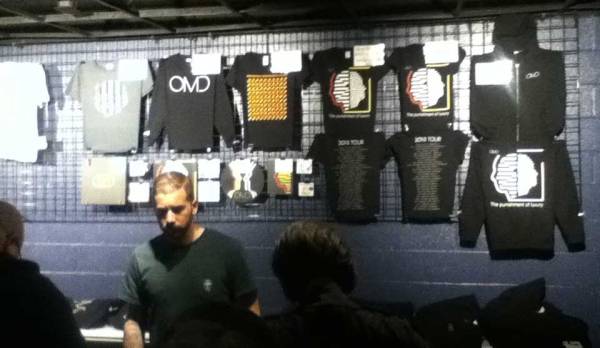 There was a good selection of nice merch here this evening

When my wife and I found seats to our liking, I hit the merch table. The tour book is always a must and at $15, this one was one of the least expansive ones I’d seen in years. It was made from heavyweight flat paper that gave a great look to the “Punishment Of Luxury” color scheme. Several t-shirts called to me. I had a hard time since usually I will always opt for the shirt with dates I attended on the back, but this time my gaze was fixed to something else.

Instead, I opted for the classic, 10-losenge OMITD cover design in black/orange as seen at left and the crazy rainbow foil “Punishment Of Luxury” artwork on gray heather at right. I also saw that OMD were asking any attendees to pitch in if they wanted for their upcoming 40th anniversary book.

Do you have any OMD memories? E-mail them to omdbook@gmail.com

So this should yield a lot of contributions for that project. I also saw that behind the merch area, there was a KORG synthesizer on the floor for some, unknown reason.

KORG in the house… but on the floor

Your guess was as good as mine as to why this vintage synth was sitting on the floor at an OMD show. I thought they had sampled all of their old gear into their Roland Fantom workstations. I was taking the effort to see if I saw a pair of checkered Vans belonging to commenter Jeremy K, but the only pair I saw in the whole place was in the merch line ahead of me and belonged to a woman.  Maybe one day Jeremy and I will recon at some ATL show, but not this evening.

I was still in the line when I heard the opening act, GGOOLLDD begin at 7:30 sharp. Not to put too fine a point on it, but I had sampled GGOOLLDD online and was horrified at what befell my ears.  They were a synth rock act with a female lead singer with one of those horrifying tremulous little girl voices that have proliferated since the 90s with a ton of vibrato – my least favorite vocal footprint. When watching their video with my wife I remarked that maybe Stevie Nicks was no longer my least favorite vocalist any longer [this was QUITE a statement…] so it’s fair to say that I was not looking forward to GGOOLLDD’s performance, but seeing as the show was general admission, if we wanted seats to our liking, this necessitated viewing the band. From the merch area outside the room, it sounded pretty awful. Then I walked inside and saw the band. 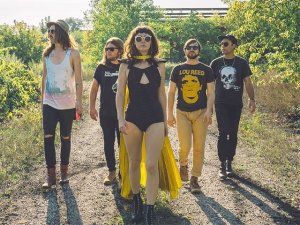 GGOOLLDD – The singer had bleached her hair since this press photo

The singer was dressed ludicrously in a pair of shorts that were too tight and too short, with some kind of garter belt/chains [?] attached to her thighs. Her every move an awkward, contrived pose that hurt to watch. The band all looked like what I would call the Heavy Metal Paint Crew. Hairy dudes with long hair and white t-shirts and white jeans. It was a massive onstage disconnect as seemingly random elements completely failed to congeal into any sort of coherent, or even merely interesting whole. In concert, her shoes lit up. And her cape, which she fluttered like a golden butterfly. I blanched when she did the cartwheel. My wife opined that she was maybe the granddaughter of someone reasonably powerful and that she took a “rock presentation” class at her community college. There was not one iota of her performance that was honest or in any way genuine.

I normally like artistic contrivance, and can often prefer it to “authenticity,” but this was artless contrivance. The worst of both worlds. This seemed like a cry for help. The singer spoke a lot and apologized for her voice, which she said was going out on her, but if that happened, she said she could compensate with interpretive dance.  I thought that if she had maybe a shred of a clue about how to properly sing, maybe her voice would not be going. As it was I felt really embarrassed for her, but maybe that’s a generational thing. If so, then heaven help us. Oh, and one more thing, the band’s sound was muddy and distorted as hell! This spectacle sounded as bad as it looked. I could only hope that OMD at least sounded better than this. It ended after 30 none-too-brief minutes. This was without a doubt the worst musical/stage performance I had ever witnesses in my 54 years. Costuming, presentation, movement, and staging were absolutely the bottom of the barrel. I have no memory of any music.

Next: …Things Get Better… A Hell Of A Lot Better!