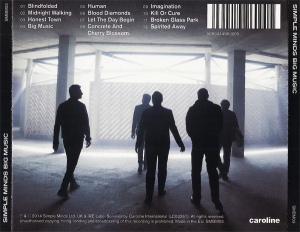 When Simple Minds dropped the first preview images of their latest album, “Big Music,” many could not help but think of Depeche Mode’s iconic cover to their album “Music For The Masses.” It was certainly the first notion to come to my mind. Here, there were some differences, but the notion of communicating widely via electronic loudspeaker was the underlying visual metaphor for both covers. The Simple Minds take was certainly of its time, and all the poorer for it. The Depeche Mode cover was one of their many excellent covers, and superior in every way to the cheap Simple Minds cover.

The Depeche Mode album has absolutely beautiful cover photography and design by Martyn Atkins’ Town + Country Planning firm. The loudhorn construction was actually placed in a real environment and photographed for the artwork, and the key lighting on the foreground against that dramatic sunset was a vivid example as any as to the power of photography during that brief magic window in the immediate pre-dawn, post-dusk hour where the landscape comes alive in a way that simply doesn’t happen under other lighting conditions. That cover photo is worth a million dollars. The logo and typography above it only adds to the overall value of the cover.

Contrast that to the cheap, nasty 3D graphic adorning the Simple Minds album! Not only is it derivative of the earlier cover but it is endlessly inferior on both technical and emotional levels. The only thing clever about it was the fact that the four largest loudhorns, as seen from above, form a variation on the Maltese Cross, which had long been part of Simple Minds’ iconography since appearing on the cover to “Promised You A Miracle.” Apart from that, there isn’t much to write home about. The font is adequate, and its placement dead center above [just like Depeche Mode] smacked of complacency. If they were going to use the same idea, the least that they could have done was to minimize the layout similarities.

The back cover of the Simple Minds CD was very different from the Depeche Mode model, with a staged shot of the band about to enter an arena of light as seen from the back. It’s miles more interesting than the cover and they might have used that instead. Even so, it’s been retouched to within an inch of its life, and at the size I’m looking at in my Record Cell, I can’t say with 100% certainty that this image was not also the product of a 3D rendering program and heavy Photoshop abuse. The work necessary to set up and take that back cover shot belies the cheapness in evidence elsewhere on this packaging, so this is where my suspicion comes from. Also, the last album cover that Peacock did for Simple Minds [“Celebrate: The Greatest Hits”] was completely reliant on CGI to render the “Colonel” from the cover of “Empires + Dance” overwritten with lyrics, that was much more interesting a concept than this in any case.

The cover is not the only aspect of the packaging that is Mode-reliant. The actual disc label printing is also redolent of the earlier disc. 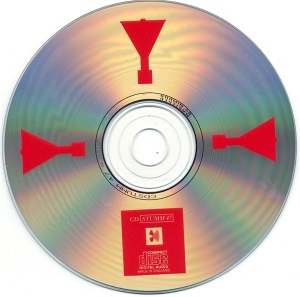 Music For The Masses CD label

And the Depeche Mode disc has the great type and logo treatment completely lacking on the Simple Minds disc. Shameless.

Next: …We’re not done here by a long shot…