Record Review: Strasse – A Stairway To You UK 12″ Late Model New-Ro From Sweden

Earlier this summer I posited the notion that a roundup of the many singles that Midge Ure produced for other talents in the ’79-’83 period might be a very interesting boxed set of god to create. Most of these were from British bands and are out there, floating around in the UK. So buying them won’t be too cheap, with the postage. But I recently got the info in my Discogs feed that the Strasse single “A Stairway To You” of 1983 was for sale at a nice price. From a US dealer! Several weeks later we have it in hand and ready to discuss. 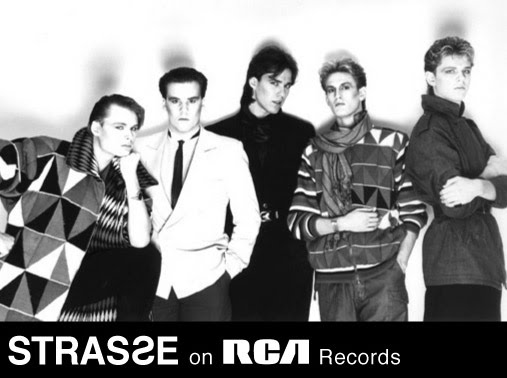 Strasse were a Swedish band active from the late 70s – early 80s and the brainchild of singer Russ Ryden. The band have reformed in the 21st century, but their 1981 debut album had some tracks produced by Midge Ure. The liner notes aren’t specific as to which ones Ure had a hand in making. Then all went quiet for a year or two, but in 1983 the group found themselves signed to RCA in the UK for this single [in 7″/12″] which according to Discogs, was issued nowhere else. Not even in their native Sweden. Like many bands that opened for Ultravox, Strasse [who did the honors in Europe] netted Ure in the studio to produce. What’s it like?

Well, with Midge Ure producing it meets a very professional standard. The vibe was right there in the slightly post-New Romantic era with guitars, synths, bass and drums/machines. The mix was clean, with the bass prominent and a few whammy bar licks in the extended intro that had the strong whiff of Ure himself. Then, the synth hook manifested and… slap me silly… it used the exact same hook and synth patch that anyone would recognized from Spandau Ballet’s “The Freeze!”

The electric piano solo as the intro ebbed, also sounded very familiar. I just haven’t pegged it yet in about a dozen listens. Then the music bed dropped out for the middle eight. leaving only the bass right up front with drums and handclaps that make me want to blurt out “hungry like the wolf… hungry like the wolf!” Just a dollop of sax for four bars at the end to remind us a little more of “Rio.” Wow. Yet more very prominently “borrowed” components of this song. This track was like a Frankenstein’s Monster of stitched together New Romantic building blocks cribbed from top selling classics of the genre.

It was all very slickly produced and sounded solid even though it was quite obviously second-hand goods. The band was certainly capable. The only weakness here [apart from originality] was perhaps the singing of Russ Ryden whose phrasing belied his Swedish origins. He tended to elongate and emphasize words like “yooooooooou” just a few vowels too far for comfort.

The B-side was another thing entirely! Melodramatic piano opened it up right in the Billy Currie wheelhouse. Then the string synths and percussion joined the piano with the percussion track being highly reminiscent of the on in “Your Name [Has Slipped My Mind Again].” Eight beats to a bar, fading out to nothing each time. The strings and piano circled for a minute or so until only the heartbeat like percussion track was the only thing left in the mix. Then in the last 45 seconds of that, weird little dub synths manifested as the track faded.

Wow! This one seemed like every inch the type of material that Ultravox had filled the B-sides of their “Quartet” period with with the exception that this outclassed tracks like “Hosanna [In Excelsis Deo]” and maybe even “Monument.” This also had the Midge Ure solo B-side vibe down cold. Put this on a tape next to “Piano” and no one would bat an eyelash.

So this was seemingly crafted for the UK market maybe a year too late to gain any commercial traction. White soul and re-emergent MOR pop was chasing any remaining florid New Romantic sentiment from the charts. Ure had worked with the band earlier, so this was one last hurrah to see if the band could carry forward, but by 1984 it was over for Strasse. And one could say the same for Midge Ure’s production career.

By that time, the Messengers singles were about the tail-end of that thread for Mr. Ure. His production career never really struck gold, except for with Visage and Phil Lynott’s “Yellow Pearl,” but any fan of Ure in the period where he was working like a fiend in multiple bands and with various artists in addition to Ultravox would probably find a lot to love in his production portfolio and getting this single was one more step in finding out just how much for myself. The A-side was competent, if derivative, goods. But the B-side counting as a virtual lost Ultravox B-side was an unexpected gem! Watch this space.

4 Responses to Record Review: Strasse – A Stairway To You UK 12″ Late Model New-Ro From Sweden