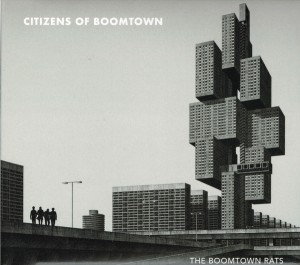 I had a vague sensation that The Boomtown Rats had come back from the great beyond a few years back. I seem to remember seeing a 7″ that manifested somewhere along the way. [checks] Nope. It was seven years ago that I chanced across evidence of the “Ratlife” 10″ single by the reformed Boomtown Rats! Like many things I see in my travels and think “by gar, I need to blog on this – I love The Boomtown Rats,” such stimuli appear and are swept from the consciousness before the all important blogging phase can result. And I had forgotten about this for a stately seven years until my Discogs feed recently alerted me to the full on album by the reunited Rats. The first in [whistles] 36 years!

This album came out on the 13th of March by the modern, trim 4-man lineup that included original members Pete Briquette, Simon Crowe, Garry Roberts, and Bob Geldof. Johnny Fingers is still A.W.O.L. and I can’t help but to think of that as a small tragedy. His playing was exemplary and I felt that he and Steve Nieve of The Attractions had largely defined the New Wave keyboard sound with their prodigious talents.

Second guitarist Gerry Cott had split the rats mothership following the [excellent] “Mondo Bongo” album of 1980. But the five members continued on for two more albums with keyboardist Johnny Fingers taking the band considerably out of their pub rock point of origin to embrace a keyboard heavy sound perfectly in sync with the dawn of the 80s in the UK. The subsequent “V Deep” and “In The Long Grass” albums didn’t have the success that the first three or four had, but I considered them to be excellent albums, if worlds apart from the early New Wave sound of the best selling “A Tonic For the Troops” and “Fine Art Of Surfacing.”

Now the band have enlisted Alan Dunn [who has recorded with Dave Thomas + The Accordion Club!] to fill the Fingers-shaped hole in the band with Briquette stepping in as producer. There was a pre-release single in February; “Trash Glam Baby.” And the 7″ even had a non-LP B-side: “There’s No Tomorrow Like Today!” So how do The Boomtown Rats sound 36 years later? I have to admit, that as much of a fan as I was, I had been unmoved by anything I had heard from Bob Geldof in his solo career. The band were much more than just him, I think.

“Trash Glam Baby” was glitter pastiche that looked back at that era with more of a rock sound than the later albums had. Great Rats BVs were on tap here. A sampling of the Full Monty on iTunes revealed that this was yet another eclectic Late Period Boomtown Rats album®. Stylistically, it was all over the place. What I heard sounded more like what I imagine the band’s influences from the late 60s and early 70s to have been than their pub rock/New Wave sound. Finger’s keyboards were missed, but not fatally. But there were flies in the ointment. The eponymous “The Boomtown Rats” was these old men making house music. Be afraid. Be very afraid. “K.I.S.S.” [not a Prince cover]featured a rapper, but it didn’t slay me in the way that the final cut did. I’m still interested in adding this one, for sure.

The majority of the album sounded good to me but who knows when I might actually buy this for a review. Since I have the first six Rats albums, there would have to be a Rock G.P.A. generated by this seventh album. I had thought about doing one for ages and now it really should happen, since The Boomtown Rats were one of the gateway New Wave bands of 1978-79 to me.  I considered them up there with Elvis Costello + The Attractions in that time period and I have to say that apart from the somewhat tentative debut album being steeped in merely good Pub Rock that they soon left behind, there’s not any dead wax in their oeuvre. We’ll have to see how this new one stands next it its brethren.