It was many months ago when I first wrote about the DLX RM of the Visage debut album; an event a long time in coming. I bought my copy from the label, Rubellan Remasters a few months after that and it was always a title that I needed to return to discussion on but as of last month, the plucky reissue label has turned the Visage tap to full on with another pair of DLX RMs of the group’s canon. Including one title that I swore would never get a professional re-release on CD. In the interim, that first, best, “Visage” CD had sold out, gone to high two figures on the aftermarket, had a re-pressing, and now that’s sold out again. Today, we’ll begin finding out …why. 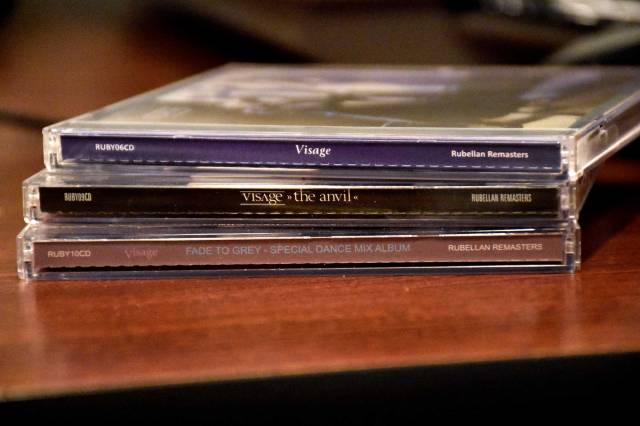 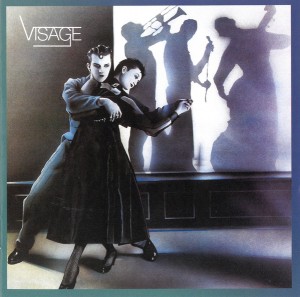 I had what was probably the first digital remaster of the “Visage” album, and I’ve played it many times in the 30+ years I’ve owned it. I suspect that the 1983 mastering was used for all copies pressed between then and the 1997 US DLX RM on One Way Records. That 1997 issue had only the dance mix of “Fade To Grey” as bonus material, and as I had that track on several discs by that time, I ignored that disc, but not the much needed copy of “The Anvil” that One Way also issued that year. I had been pining for the second Visage album on the silver disc from day one. Even though it was among the first CDs pressed by Polydor in the world, I never once saw a copy for sale.

Right from the very beginning, the difference between this new issue and the vintage copy was there in stark black and white. The intro to the amazing title track had just the bass drum, four to the floor. Naked, until the reverb piano entered the mix. Then came the phased sequencers, chorused and imparting a reckless stallion energy to the by now thrilling track. This was a song we can never tire of, but the original master, which was possibly flat, from the early days of the CD, was dull, thin and listless.

A “flat” master is where the label took a master tape, EQ’ed for vinyl LP production and did a straight digital master of it – and pressed it to CD. See WEA “target” CDs. The flat master CD faithfully replicates the LP listening experience, sans surface noise and playback distortions, but it falls short of capturing the potential on the master tape. The dynamic range of an LP is much less than what a CD can carry. Frequencies and abrupt shifts of sound that would cause problems for a cutting lathe head when making a lacquer master for an LP, the CD just laughs at. Of course, the obverse was also true. The ability to digitally compress mastered sound to a CD to such extremes that drums sound like gunshots firing has been one of the big problems of  the CD format for the last 20 years.

By contrast the new issue packed the solid punch that a master tape could yield to the CD format now that engineers knew how to optimize the music for CD. The early days of CD were a steep learning curve for everyone. The kick drum here no longer sounded like Rusty Egan was thwacking a cardboard box. The sound was fuller, and a little louder. There was a judicious use of compression here, but nothing destructive. There’s so much more to hear on this issue. The adjustments to EQ have resulted in a rounder sound as well. The full frequency information on the tape was now front and center in the music. Of course, the album itself was a classic. We’ve waxed eloquent on that score years ago. Let’s next turn our attention to the other reason why this CD was a must: the bonus material.

4 Responses to Visage Deluxe Week Commences With A Trio Of DLX RMs From Rubellan Remasters [pt. 1]