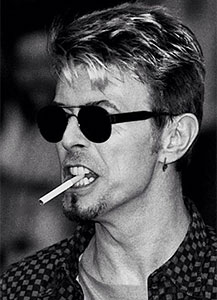 Several months of 1995 were spent waiting for the new David Bowie album, “Outside.” This was it. The big one. The one where he and Eno finally made the 4ourth album of their “Berlin Trilogy.” This one would be the album where he finally shucked the dead seagull of “Let’s Dance” that had been a perceivable drag on his movement forward for a dozen years. I could not wait for this album! Like any fan, I had to. It would not be released until my birthday that year. My fiancée’s friend, Susan, would give it to me as a gift at my birthday party that year. I was chomping at the bit to actually hear this long-imagined Eno-Bowie teamup; the first since 1979.

As it turned out, I could have waited another 16 years. Subtitled “The Nathan Adler Diaries: A Hyper-Cycle” only illustrates how the top-heavy, yet dated conceit of murder as art in 1999 bogged down the entire conception of the album. To say nothing of the narrative conceits [such that they existed] and character soliloquies that brought the proceedings to a screeching halt whenever they occurred. The songs and vibe were very dubious, and failed to gel as an album. Well, it always was  a “gothic hyper-cycle.” Maybe playing the album from start to finish [which is a chore, let me say] was supposed to miss the point? I became only more aggravated with the album after reading about Eno’s backstory/processes that defined the work environment of the album, which was improvised in the studio completely. These concepts were far more interesting than the actual music produced.

It’s not a stretch to say that this album vied with “Let’s Dance” as my most disappointing Bowie album going forward, and remember; at this point, I had yet to actually hear “Let’s Dance” in full! In the years afterward, I have come to recognize that many individual songs taken out of the album’s context, are quite good. It’s just the format and “story” which were leaden to me. Even with this disappointment, I made sure that my Bowie-fan fiancée and I had tickets to the album’s tour. We would have to travel to Atlanta, but we did that regularly for much less than a Bowie tour!

Bowie + NIN; a match made in an accountant’s dream.

By 1995 we were more than over NIN. We had gotten off that tiresome bus by 1993 and by 1995, I had purged the more specious “industrial” recordings from my Record Cell. All five NIN EPs were sold off, as were most KMFDM discs. That sort of adolescent aggro-metal was way past its sell-by date with me. We timed our arrival at the Lakewood Amphitheater to occur after NIN had left the stage. What we couldn’t have known, was that Bowie’s band would share a number with NIN and then take over midway. We had eaten a leisurely Thai meal and were walking from the parking lot when the strains of “Look Back In Anger” caused us to hurry towards the venue from the parking lot; just in time for a mass exodus of NIN fans to avoid seeing the old geezer who had driven their hero, Trent Reznor, from the stage.

I was excited to see Reeves Gabrels playing with Bowie since I had not gotten to see Tin Machine. Better still, keyboardist Mike Garson had renewed ties with Bowie [he had played on the “Buddha Of Suburbia” album and had continued forward on “Outside.” and was a fascinating player to watch and hear. We took our seats in the now 60% full outdoor shed and watched the show. The set list was good:

Seven tracks from the new album, and seven choice deep cuts… plus “Under Pressure.” I was most excited to hear “Nite Flights,” “Joe The Lion” and “Breaking Glass.” My fiancée was impressed with “Andy Warhol,” which was fantastically staged with stroboscopic lighting. I have to admit, that it was nice to hear a setlist without those songs he had jettisoned following the “Sound + Vision” tour. Not hearing “Let’s Dance” was worth any amount of tracks from the new album, though “The Hotel” and “Through These Architect’s Eyes” would have been most welcome to me. This had been a much more interesting Bowie concert than my first even if it had been in an outdoor shed. Given that I had only been digesting the new album for less than a fortnight, it was an honorable performance, even if the linkup with NIN was obviously only for the money. Bowie had triangulated that he would need a big pull to make a tour with his “difficult” new album and no sure-fire hits viable, and post 1994, NIN were a big fish in a big pond. That Reznor was a starry-eyed fan made it all too easy for Bowie to ride his coat tails.

Next: …Bowie tries his hand at other genres I disdain!