In yesterday’s post, I alluded to something that needed to get out. How awful Eurythmics became in just a single album, without warning. My journey spanned the gap from being an Annie Lennox early adopter and avid collector to not caring a whit about whatever it she’s done for the last quarter century. It’s been a long road, but her artistic decisions have most definitely not resonated with me. 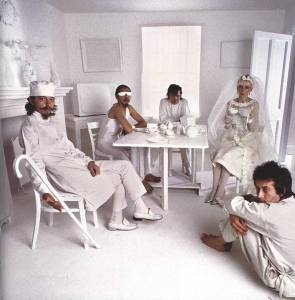 I first heard her sing in The Tourists, the mod New Wave band from England. I chanced to see their video for their cover of Dusty Springfield’s “I Only Want To Be With You” in 1979, when their second album “Reality Effect” got released in America. I instantly loved this band! The vocals were shared between band writer Peet Coombs and Annie Lennox. Future musical partner Dave Stewart played guitar, but this was the time that he and Lennox were actually a couple. I played that album probably more than any other in 1979. The pop sensibilities of the band were strong, but so were the hints of psychedelia laying just underneath it all. Not shocking considering the drugs that Coombs and Stewart were known to take at the time.

I quickly discovered that “Reality Effect” was their sophomore effort. Their debut was only available as an import and it was in fact the first import LP that I can remember purchasing at the enormous cost of $10.00! Back when my $7.50/week lunch money was all I had to work with. The debut album was produced by Conny Plank, who I was already cognizant of thanks to his production of Kraftwerk, whose “Autobahn” was one of the first albums I’d bought the previous year when getting my first stereo.

1980 brought their third album, “Luminous Basement” and it was another winner, but as soon as the album was released, I discovered that the band had split up. I kept my nose to the ground and found out that Annie Lennox and Dave Stewart had formed a band called Eurythmics in 1981. I avidly searched for any records, but they were mighty thin on the ground! It looked like no importers were bothering where I lived. It was not until a full year later, that I finally found my first Eurythmics record.

It was  my birthday in 1982, and I used my birthday cash to buy music, of course! I finally nabbed the “Never Gonna Cry Again” 7″ at Record City Colonial and could finally hear this new band. They sounded a far cry from the pop rock of The Tourists, but I could definitely get behind the dark, Krautrock sound they were exploring with Conny Plank. His earlier work with them was more on their turf. they met him half way [or more] here, Some time later, I found a used copy of the “This Is the House” 12″ single at Retro Records and I felt like I’d won the lottery. But no further Eurythmics records were forthcoming. That all changed in the spring of 1983 when the album below dropped.

“Sweet Dreams [Are Made Of This]” obviously got The Big Push® from label RCA, since the band almost overnight got massive airplay on MTV and that was just the beginning of the group mining gold and platinum for a solid run that extended through their “Revenge” album in America. It felt strange seeing Annie Lennox become a household name, but the work they were doing in Eurythmics, was exceptionally good. It was odd that these two refugees from a New Wave band turned their attention to synthesizers, and while I tended to listen to a lot of synth-based bands, to this day I preferred the music of The Tourists. That’s not to say I disliked Eurythmics.

Indeed, I was delighted to see people who I thought were talented and making great records, were even managing to sell them by the truckload not only around the world but also in America. A happy circumstance of their success was that it was possible after the “Sweet Dreams” album to obtain the first Eurythmics album that I had been waiting for since 1981! Their canny image manipulation that must have been the thing that put them over the top, because while talent is important, you, I, and the lamppost know that it does not necessarily sell records! The band’s excellent videos must have only helped.

Their next two albums were increasingly intense, and darkly introverted material. “Touch” was an even bigger seller in America – reaching Platinum [1,000,000 sales] in spite of an emotionally brutal series of songs that only lightened up for the uncharacteristically upbeat Latinesque “Right By Your Side.” It seemed to be nothing troubling at the time, but I can see it now as an outlier to where the band were soon headed. That was followed by the even more dour “1984: For The Love Of Big Brother” album which was marketed as the soundtrack to the film adaptation of George Orwell’s book in the title year. There was controversy over their inclusion into the film’s soundtrack when director Michael Radford bristled at their inclusion into one edition of his film. He also had a version of the film in release with an orchestral score and no Eurythmics. I recall that was the workings of Virgin who wanted some pop hits out of what was a very good adaptation of the book. When Eurythmics moved on after this, the bottom dropped out.

Aretha Franklin with Eurythmics: A photo to match the grace of the record

1985, the year of many a New Wave band’s Waterloo, was no different when Eurythmics cam calling with the turgid “Be Yourself Tonight.” As boring and mainstream imaginable from these previously fascinating musicians. Only one single managed to rise above the mire to my ears. “It’s Alright [Baby’s Coming Back]” managed to hold the dull rock music at bay. The album was salted with big name guest stars handing in perfunctory turns that were uniformly awful …from Stevie Wonder, to Aretha Franklin, and even Elvis Costello; who was certainly at the cusp of his sell-by-date at that time. He had just made the first of his awful records a year earlier.

Next: …We Can Only Go Up From Here