Last year, Steven Jones + Logan Sky began their V.I.P. subscription service and it’s already time for another subscriber perk. Another cassette of loose tracks, some vintage, most contemporary, and a couple so shiny they smell like a new car. On their last tape we only got the “Deluxe Tourist [prologue]” which certainly tantalized, but now it’s been fleshed out into a darkly sinister scenario which marked it as perhaps thematically linked to the fantastic “Corrupt State” material of a few years back. I love it when they get dystopian and political as it reflects the here and now!

“All your assets have been seized,
A nation down on its knees
I rule with an iron fist,
I’m a deluxe… tourist” – “Deluxe Tourist”

If this song arrived late to the “Corrupt State” party, then I’m glad it’s here for us now. The glitched out ending was laying it on a bit thick, thank goodness.

The next song was the earliest material here, as they had a remix of “The Now Crowd [fast shutter]” from their 2015 “Polaroids” EP. The warm tremolo of the Fender Rhodes played well with the string patches and bass synth. It was a lovely, poppy number as dedicated to the late Steve Strange. Depeche Mode was one of the touchstones 0f their early sound and this might have fit on “A Broken Frame.” But it served here to mark just how far their instrumental sound had matured in the ensuing four years. 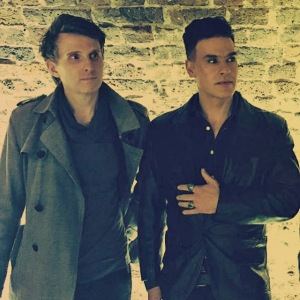 Next, a pair of songs with Visage comrade Lauren Duvall guesting on duets with Jones manifested in the flow. “The Language Of Intrigues” was one of their smoldering specialties. Let it not be said that the duo don’t have a handle on their electro-perv side. This and “This Space Was Transforming” were some of the of the tunes that their email list got a few years back and they’re too beautiful to have been lost to the mists of the fast moving digital world. Their last tape had a different mix of “Transform This Space” but the less rubbery lead lines fit the song much better this time out. Another track that has mutated from the last tape was “Supply Pre:Order.” The last time, it was called “Supply Data [Russian Intervention]” and now it was an almost dub edit of the track, which concerned Cambridge Analytica, so yes, it’s still darkly relevant material that might have dated from the “Corrupt State” project. That album had a very different track called “Supply Chains” which this resembled nothing in the slightest.

The segue between that song and the next track, a dub mix of “Black Clouds” from the “Electric Eye” album on 2018, worked like a fiend as the range and sequencing of the material here fit together impressively well. As a longtime listener, one songs here I did not recognize the provenance of was the stellar “Paint + Porno [On Tape].” This one was a rare stab at a crepuscular space disco poised somewhere between Roland Romanelli and Cabaret Voltaire. Crazy, but true. With diaphanous femmevox backing this one up it had legs for days. Where did this come from?! I need more music like this, please. And bonus points for picking up the erotic/paint metaphor that I think has sat shamefully unused on the shelf since 1982’s “Paint Me Down.”

A pair of alternate versions of material from their last opus, “Rotating Angels,” brought the timeline of the tape almost up to date. This was material that showed how the band had successfully slotted Ebow guitar from Jan Linton into their sound for the next step forward. “Rotating Angles [out of the box]” had stripped that title track of its quirky rhythm loops to find a new and poised center between the methodical lead lines of Logan Sky juxtaposed against the keening Ebow of Linton. The ensuing changes gave the track even more gravitas. “Spider’s Kiss” had not been drastically changed in spite of now being almost twice as long, but with a dark, evil throbber like this one, that’s nothing inconsequential! Steven Jones’ delivery of the lyric remained devastating.

Next, the tape took a leap into the future with two tracks from the next Jones + Sky album, given here in trailer form. I was delighted to see that the inclusion of Linton last album was not a one-off as his textural support here allowed the band to flourish in new and sophisticated ways as their sound has moved out of the synthpop ghetto to become an emotive force of songwriting to be reckoned with. The tantalizing glimpse of “European Lovers [prologue]” featured rhythmic piano up front with the Polymoog taking a back seat to ascend to the same plateau that Numan had attained on his vastly underrated “Dance.” Jones + Sky have dramatically expanded the reach their work over the last five or so years as reflected in this tape. Best of all the latest material revealed a Great Leap Forward so vibrant as to make Mao jealous. If you are receptive to receiving this [and the future music of 2020] when it ships to subscribers in February, then maybe their subscription model is for you too? £20 a year nets the listener their full catalog, several new main projects, as well as subscriber-only compilations of material that was too good not to compile, like these songs.