Posted on September 13, 2019 by postpunkmonk

While I was busy yesterday extolling the merits of the “1999” BSOG edition, my personal device alerted me that Sparks have done further curation of their formidable back catalog once more. This time it’s an album we already know and love that getting the DLX RM treatment as well as a newly compiled career retrospective looking back on a half-century of work. Formidable! 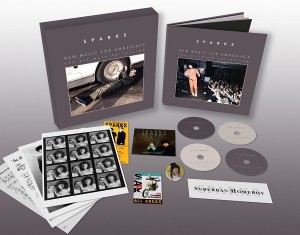 The last time they compiled a career retrospective, it was six years ago with the hefty “New Music For Amnesiacs: The Ultimate Collection” 5xCD boxed set from UMG that included:

Very posh…and very co$tly. It sold for three figures as I recall, though it’s trading hands for about double the initial cost now. There were a handful of rarities, but the cost placed it out of my sights. This time, the first Sparks logo [they began their career under the name Haflneslon]  from their sophomore album “A Woofer In Tweeter’s Clothing” has been dusted off and re-used for the new compilation “Past Tense: The Best Of Sparks.” 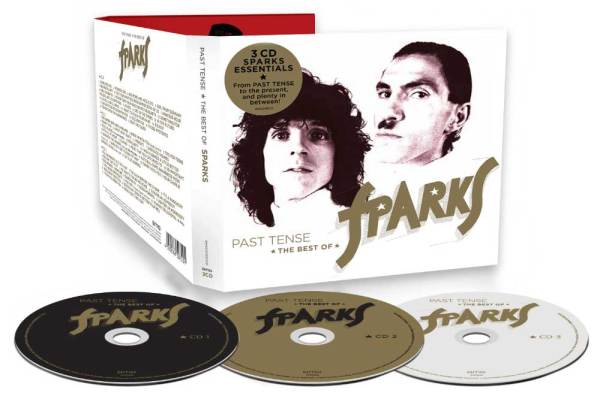 Go for the 3xCD version! 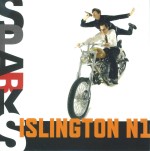 This time there were a few more rarities, and the set started off with the earliest known Sparks recording, “Computer Girl,” which had only been released on 2006 as a bonus CD in a Japanese book on the band. Their great single with Les Rita Mitsouko is rightly included, and the set has a reach going all the way to their last opus, “Hippopotamus,” and beyond. Disc three had the rare  track “IslingtonN1” which was only on a 2008 CD5 given to people who bought all 21 tickets for the Complete Sparks Residency in England; 21 concerts in 21 nights when they played all 21 of their albums in order. Suck on that, Kraftwerk! 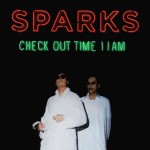 I am happy to see that even their FFS period was covered on this collection, but it even encompassed the 7″ only A-side released in late 2017; “Check Out Time 11 AM.” Though I was crestfallen to see that the same courtesy was not extended to “Now You’ve Earned The Right To Be A Dick” which was a non-LP A-side on shaped picture disc only from early last year that would have probably benefitted much in fidelity from its leap from pic disc to CD.

It’s released on November 8, 2019 in a trio of formats: 2xCD, 3xCD, and 3xLP. The 2xCD with 39 songs is for wimps but cheap at $12.99. The 3xLP is cheap enough as these things go at $36.99, but it only had a subset of the material with just 27 cuts. The 3xCD is the best value with 58 tunes for the low, low price of just $15.99!! A 16-page booklet accompanies the music. Any neophytes seeking to wet their metaphoric toes in the dazzling world of Sparks should do well to start there. 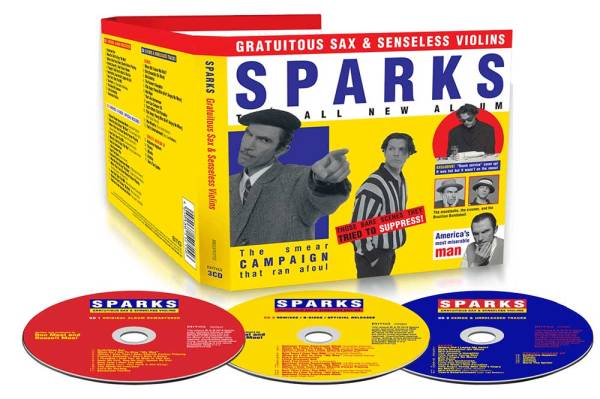 Those demos on disc 3 have my name on them!

We were just re-visiting the wonders of the “Gratuitous Sax + Senseless Violins” album two months ago and were pleased by its mix of barbed wit, insight, and pathos. The album gave Sparks a European hit in their third decade and provided a leg up for the band to make very impressive late-in-the-game conceptual leaps following it. Now the gaze has been turned on it again 25 years later with a plethora of tantalizing goods added to the program.

But the third CD has me drooling. And I ain’t fooling. It’s all unreleased demos of songs written during this period but ultimately not included on the album. And Ron Mael was the lead voice on some of these. Tracks 13-15 are from the unreleased Christi Haydon EP the Maels produced that never got released. Ms. Haydon was best known as the photographer of the “pesky photog” tabloid shots on the album cover that amused to no end. All of this and an early Who cover to boot! The song that I really have to hear badly is “Bob Hope.” I really am curious to hear what Ron did with the subject matter as I have a “difficult” relationship with the famed comic.

Ron and Russell have written the liner notes in the 20 page booklet and I’m sure this will be something to hear. Given that I paid $1.00 on La La in 2006 for my copy of this album, I am all too willing to re-purchase it in this executive version with all of the cash going to the artistes. As usual, a granular selection of formats are on offer as the album is released on November 15, 2019 in a variety of CD/vinyl formats. The main ones are: black LP $24.99, yellow LP + 2xCD [discs 2-3] for $36.99, and the Monk-tastic 3xCD for $18.99. I may pass on the other collection but the demos on this one are calling my name like sirens. There are a potentially bewildering selection of bundles so I’ll leave it to you to find your own way in the Official Sparks Webstore here.