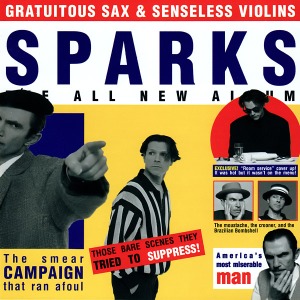 Thank goodness for Sparks! The band have diligently plowed forward with a huge and impressive body of work that has seen them encroaching upon their nearly 50th year[!] as a very necessary antidote to the dull and cloth-headed music that normally populates the pop charts. This has been down to the unassailable fact that every so often, the band have managed to score a rogue chart hit in this, that, or the other market, sufficiently enough to keep their profile afloat. They probably have no shortage of admirers, but without a hit every 5-7 years it’s easy to get only lip service from labels.

After scoring big in the UK and France with completely different music from completely different eras of the band, they got a lifeline in the 90s following their admittedly scanty “Interior Design” album. The break after that one was a long six years; during which, The Brothers Mael had unsuccessfully tried to get a film made of the Japanese manga series “Mai, Psychic Girl” to no avail. After getting nowhere on that score, they had a lifeline extended by the production duo of Michael Münzing and Luca Anzilotti who had scored big with Snap and “The Power” as the 80s became the 90s. They got a label deal and weren’t shy about extending the hand to heroes like Heaven 17 a few years later or to Sparks in 1994. 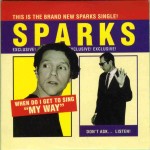 The first thing about the album to hit you was the hilarious cover. A bold four color job in reflex blue, yellow and red, the sleazy tabloid innuendo never fails to make me smile. The photo of Ron at the lower right corner was priceless. After the delicate haiku of “Gratuitous Sax,” “When Do I Get To Sing ‘My Way?'” was the single that anchored the album in many territories, but had its best chart showing with a solid number seven in Germany. By this outing it was just the brothers and machines, and the results ironically had the men who invented the synth pop dance duo trope competing with their progeny Pet Shop Boys quite effectively. Around 1994, PSB had recently made their “Very” album and the likes of “I Wouldn’t Normally Do this Kind Of Thing” already sounded like Sparks, so why not welcome the originators of that sound back on to the charts with the witty number than encompassed both the worlds of Frank Sinatra and Sid Vicious.

“[When I Kiss You] I Hear Charlie Parker Playing” was the next single and it stayed in the same upbeat pop space as “My Way” but the lyric was not as memorable as the first single had been. The first song here that would make my cut for the Sparks Desert Island Disc was definitely “I Thought I Told You To Wait In The Car!” Ron Mael is capable of depicting amazingly subtle emotional points of view that no other songwriter would be capable of touching and makes it all look natural. The conceit of the song was to depict a relationship that was ill-conceived and dysfunctional on a profound, yet to show the unquestioning love of the protagonist undimmed by the vagaries of the vast difference in stature between the singer and his world-straddling inamorata. I gape in awe at the storytelling inherent in this song.