REDUX: A Young Person’s Guide To: The Dickies – Nights In White Satin 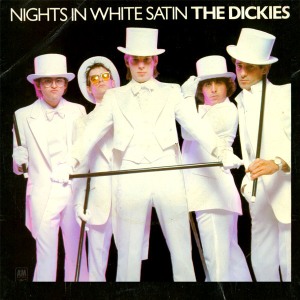 Back in the New Wave era we had a crate load of irreverent, smart-assed cover versions. Cover versions usually follow new genres. Disco was filled with ’em. It’s how new styles become ripe for exploitation after the pioneers define them. What set New Wave apart is that is was full of cover versions that were intellectual responses to a lot of what came before. Much of the genre was a reaction against: rock pretension, smugness, and accomplishment. As Meatloaf said, “two outta three ain’t bad.” The record we’re looking at today certainly hits the target for the first two criteria, but don’t let their amphetamine speed fool you; The Dickies had talent to spare even as they were practically allergic to using it in the ways that, let’s say, Rick Wakeman, might have done. They partially existed to mock rock royalty’s penchant for pretension and smugness.

And nowhere is that ethos more encapsulated than within the grooves of this record. If ever there was a standard-bearer for middlebrow pretension in rock, it was probably The Moody Blues with their laughably kitschy, albeit game-changing, second album. When I was nine years old, for some reason, “Nights In White Satin,” the 1967 single by The Moody Blues was inexplicably a number one single in America five years later! As a child, I found the song impossibly maudlin and depressing. Five years later, as a pretentious adolescent, it became for a year or two, my favorite song ever! Fortunately, I came to my senses and when I had more education and experience under my belt, I could see it as the processed cheese that it always was.

So the time was ripe in 1979 for The Dickies to give this stodgy piece of middlebrow aspiration an injection of irreverent speed and fun; the last quality being completely alien to The Moody Blues, who were as stiff as boards. They rip through this with aplomb, but it’s perhaps not quite as fast as their blistering take on “Paranoid,” which actually was a great song before they covered it. Here, they are content to merely spray seltzer in Justin Hayward’s face, metaphorically, at least. As usual, the primary, A+M UK 7″ was, like almost every Dickies single, issued on colored vinyl. This time it was white, of course. Sadly, this is not a record in my Record Cell, but I should get a copy since the B-side is a remix of “Waterslide” from the band’s debut album. Fortunately, copies of this seem to be plentiful and at low prices. 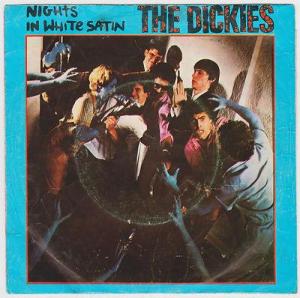 Strangely, enough, their is another sleeve variant for the Portuguese release, also made in 1979. As we can see, the tie + tails splendor of the UK sleeve has been eschewed for a straight run of the cover to the attendant “Dawn Of The Dickies” album. Why, I can’t quite say. Sure, the type treatment differs, understandably. But only Dickies completists need apply here, since the colored vinyl stayed in the UK and more importantly, the B-side with a remix variant was swapped for a straight cut from the “Dawn Of The Dickies” album.

Throughout my history of collecting records, there are more than a handful that I count myself lucky to own. Records that I simply can’t believe ever found their way to the sleepy hamlet I grew up in and into the right record stores, awaiting my purchase. And then there’s this one! A+M US was a year late to the game in releasing this single compared to the UK and Portuguese divisions of the label, but in terms of packaging, they more than made up for it! Looking at this sleeve, it’s hard to imagine how such a incendiary image would ever have gotten green-lighted! Even more shocking was that I did not buy this in 1980, but 18 years later! Heck, I didn’t even know about this sleeve until I walked into Rock & Roll Heaven in 1998 and saw it pinned to the wall for, what, six or eight dollars?! As a Dickies fan, I didn’t think twice and today, if I wanted the pleasure of its company, I would be looking at serious money to own this.

The B-side is yet another album cut, albeit one that was a single as well in the UK. The band’s song of praise to the three Pep Boys, who sell car parts all over this great land of ours. But who cares about that; just look at that sleeve! These guys were mocking the Ku Klux Klan long before that became mainstream with “O Brother, Where Art Thou!” But, somehow, I can’t help suspecting that this release may have a lot to do with why The Dickies soon found themselves off of A+M Records and faced a three year banishment from the record stores until “Stutkas Over Disneyland” appeared on PVC Records three years later.

4 Responses to REDUX: A Young Person’s Guide To: The Dickies – Nights In White Satin