1985 brought a new drive to Icehouse since the previous album, “Sidewalk” saw a marked shift downward from the growth curve that had moved from “Icehouse” to “Primitive Man.” The pressure was on, but the band had now gelled around the Iva Davies/Bob Kretschmer writing nexus. Guy Pratt was present on the album, but with all of his many irons in the fire, something had to give and he was replaced for touring the fourth album with Glen Krawczyk. The album was “Measure For Measure” and it went a far distance in making up for the commercial slack that had happened with “Sidewalk.” Once more, there would be North American releases and a more vibrant mixture of mixes and B-sides to fuel this proposed BSOG.

Though the “Measure For Measure” CD contained the first bonus tracks on an Icehouse album, “The Perfect Crime” was not amongst them, not was it on the OZ 12″ of this title.

Local man Warne Livesy remixed “No Promises” for 12″ release in the Southern Hemisphere. There were three instrumental B-sides from “Boxes” included instead of “The Perfect Crime,” but given that the “Boxes” OST is available separately, these instrumentals will not fall within the scope of this proposed compilation.

As usual, the A-side was remixed by local talent for North America. Steve Thompson + Michael Barbiero got the nod here, and not for the first time with this band. When reviewing my collection, I was certain that I had all of the many US Chrysalis commercial and promo-only singles locked down, but this one is scandalously absent from the Record Cell! Memo to self…

The Ziggy-esque rocker “Baby, You’re So Strange” sported 3 non-LP B-sides as the “Single Measures” EP. Available in Australia only as a 12″ and 2×7″ with all the same tracks.

A third single got an extended remix by Livesy again for the OZ and German markets. Live tracks from the Tivoli concert began to filter out on B-sides.

The muscular “Cross The Border” had been the track I was waiting for an extended mix of. The remix was by Michael Brauer and in a rare move, it’s the only mix on either side of the equator. The US 12″ lacked sleeve art and swapped the 7″ mix of the A-side for the live track.

America and England got the fine mid-tempo ballad “Paradise” as a single and the US promo 12″ featured live cuts from the band’s NYC visit instead of the Tivoli show in Sydney. 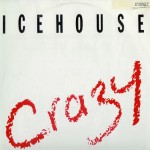 The lead single from the band’s monster fifth album was available in mixes by David Hemming and Davies himself.

Next: …An explosion of Colours