This album took a long time for me to approach. I hopped onboard the Jones train in 1981 with “Nightclubbing” but the next record that followed was the last one with the transformative Compass Point All-Stars involvement. Her first album after the Compass Point Trilogy was the unconvincing “Slave To the Rhythm;” an album cobbled together from a single and presumably hundreds of hours of Trevor Horn sessions. “Slave to The Rhythm” was not bad for what it was, but when I pull a Jones album to listen, it’s usually her ’80-’82 period.

I remember her releasing the “Inside Story” album when the video for “I’m Not Prefect [But I’m Perfect For You]” got a slight push on MTV. Nile Rogers was producing and the overall vibe was vastly different from my preferred Grace Jones Island sound with the single being more typical, mid-80s Nile Rodgers Digital Funk. Heavy on the DX7 and PPG Wave. The track sounded like a continuation of Duran Duran’s “Notorious” with Nile’s tight riffing and the phased Roland percussion he was into during that period. It’s competent goods, but a step down in musicality from what had come earlier. I was unconvinced to try the album at that point.

Last weekend I was buying the Ultravox CD I wrote about yesterday and the dealer also had the two albums for Capitol that Ms. Jones had recorded that I had traditionally taken a pass on. I didn’t normally see them so I took the bait and now they’re in the Record Cell. Thirty five years had not changed my blasé opinion of the lead off single, but how would the rest fare?

“Hollywood Liar” was more pixilated Funk with brittle sounding production that underserved the vitriol that Ms. Jones invested into the lyrics, which I’d wager were 100% taken from her life. I recently heard Nile Rodgers discussing the opening lyric on Martyn Ware’s podcast and it certainly was an attention grabber.

Things got a little more interesting with the storyline of “Chan Hitchhikes To Shanghai” as the typical mid-80s production was attached to a compelling lyric that gave us a song that told of Chan’s story and it was far from typical dance music lyrics of the period. Or any other period, really. 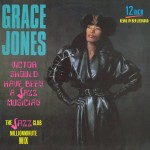 I was not prepared for what came next. “Victor Should Have Been A Jazz Musician” blindsided me by being the furthest thing from what had come previously. This was a fine example of mid-80s Jazz Pop of the kind that I was liberally swimming in in the 1986 period. Ms. Jones caught my ear immediately with her opening lyric recounting a Nina Simone concert she had attended with some of the most intimate singing I’d heard from her. Rodgers got to pull out all of his legitimate Jazz chops in a way that was usually unheard from him. My only quibble was the presence of the dreaded Fender Rhodes electric piano patch in the keys, but I’d let it pass for an song this beguiling. May I please have an entire album of this vibe from Grace Jones?

Not surprisingly, this was a single in various European markets and especially France. I was listening to a lot of French music just like this at the time, so that made perfect commercial sense. Making a little less sense, was the notion of letting Ben Liebrand remix the cut for 12″ single. I’m almost afraid to hear this but it’s on the want list now since I already have committed to rounding up any stray Grace Jones remixes.

“Party Girl” was the only track here with a hint of the Reggae that used to be Jones’ style, but the digital production was shrill and plastic and featured keyboards that were absolutely cloying. “Crush” was another single that was filled with Post-FGTH tech-Funk. The bass was definitely from the Synclavier sample library! I am capable of hearing it in “Two Tribes” all day long, but elsewhere? Not so much.

Things got a little more interesting in “Barefoot In Beverly Hills.” The lyric was so very Grace Jones, with her attitudes to life boldly up front. The sweet backing vocals in the chorus were nicely juxtaposed against the tightly syncopated verses that showed Ms. Jones percussively attacking the lyric in a hypnotic fashion.

I sort of liked the way that “White Collar Crime” had almost a Steely Dan vibe as the lyric showed that “Corporate Cannibal” on “Hurricane,” 22 years later was no fluke. There’s something in the topic that fascinates Ms. Jones. The music bed almost felt like something from “Aja” with the Borneo Horns adding a lot of style to the track. The closing title track was a surprising throwback to the Gospel of Grace Jones’ childhood, complete with massed choral vocals.

What I heard all these years later was a little more interesting than I was expecting up front. All of the songs here were written by Bruce Woolley [“Slave To The Rhythm”] and Ms. Jones. She managed to invest a lot more of herself into the songs than I was expecting. The Compass point Trilogy songs were not telling stories in the same way that most of these songs were. I recall being surprised at the personal detail and storytelling of the “Hurricane” album but “Inside Story” showed that Jones was already moving in this direction with her writing even back in 1986.

Most of the songs here were more interesting than “I’m Not Perfect [But I’m Perfect For You]” even if the production wasn’t terribly deathless. And I was surprised at the wide variety of vocal styles that Ms. Jones employed here. While the deadpan dominatrix of “Nightclubbing” was arresting, when she actually sang on the last song of that album it was startling. Here the singing was widely varied in style from cut to cut. While the album was cemented into the mid-80s production straitjacket, there were cracks in the production facade that allowed some character to break through. None moreso than on “Victor Should Have Been A Jazz Musician.”

The next album, “Bulletproof Heart,” as produced by Civiles + Cole awaits me in the Record Cell. Even Grace Jones recounted the making of this one in her memoirs as the reason why she stayed out of recording studios for twenty or more years…gulp! Wish me luck.

10 Responses to Record Review: Grace Jones – “Inside Story” US CD