Having successfully navigated the choppy waters of “Inside Story,” I also bought a copy of “Bulletproof Heart” at the same time and place, and this time I should not have left the marina. I recalled that in reading “I’ll Never Write My Memoirs,” Ms. Jones claimed that this album was the reason why she did not set foot in a recording studio for nearly 20 years. Having now heard the results, I can’t say she had the wrong response.

The lead off track was “Driving Satisfaction” with a nod towards the double entendré of “Pull Up To The Bumper, but that’s as far as by satisfaction got with the clattery, New Jack Swing of Civiles + Cole’s production. There’s a hint of Barry Bond theme in the mix, but it was fairly obliterated by the busy drum programming up front, in my face. I was surprised to see that Civiles + Cole were even more prevalent as producers in the ’87-’89 period that predated their own C+C Music Factory hits, but really, these two were probably the US equivalent [at the time] of a concern like PWL. There was a reason why their own branding used the word factory.

It says everything about this album that I had no idea what the singles from it were. I’ve not seen either of them in the ensuing 32 years of browsing bins…ever! My default stance for the last 20 years was to buy every Grace Jones single I came across. “Love On Top Of Love” was another C+C production from the disc and the first single. It’s a tough cut of meat to chew on. It’s a bit sad to hear Grace Jones reduced to artistic parity with Paula Abdul [though singing circles around her nonetheless]. I can’t imagine any 12″ version of of this since at 6:17 it overstays its welcome by two thirds!

Since I’ve invoked Paul Abdul, let’s face front. “Paper Plan” was ghastly. Every inch an Abdul ballad with DX7 presets and brittle late 80s production tropes.And let me le you in on a little secret of this album. It’s not just down to C+C slicking this up with their bag of usual tricks. The production on this album is a mess. Most of it down to Grace and her then-husband Chris Stanley. It looks like not only were Civiles + Cole brought in to generate hits, but also Jonathan Elias [who did great things on Duran Duran’s “Big Thing”] as well. “Driving Satisfaction” was actually credited to all three teams!! It goes far to explain the 18 car pileup effect of this album. the worst thing? We can’t really point at any one production team as benign at fault since there’s so little here worth salvaging.

The title track was a shameless rip off of Michael Jackson’s “The Way You Make Me Feel” and we can pin that at Stanley/Jones as well as Elias. I can’t believe that Ms. Jones needed to write the trite anti-drug song “Crack Attack” after the opening lines we quoted yesterday from “Hollywood Liar!”  That stance holds no veracity at all. Worse, like all trite anti-drug songs, the music failed to convince. “White Lines” this most certainly isn’t. Now had La Jones covered that one, I can see her winning me over since with “White Lines” the words say no but the vibe screams “YES!” I could believe that coming from her. The opening rap suggested that she was trying to compete with “White Lines,” and the foley effects of deep pipe hits was beyond heavy handed. 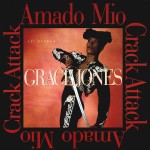 There were a few bright spots. “On My Way” had the authority that we had come to expect from Grace Jones. And it was actually funky. The tribal drum programming on “Seduction Surrender” actually managed to syncopate instead of flail. The second single was maybe the best track here. “Amado Mio” was an oldie but goodie from the film “Gilda” in the 40s. Here it approximated the European chanson that La Jones liked to investigate every now and then.

But the pickings were very slim here. It’s more or less a mess that fails to congeal as a Grace Jones album, and is of a piece with similar farragoes as “Uvox” as an example of the artist not understanding their purpose. This is not an album to buy but one to perhaps sample and buy a track or two at most. Not every flop album almost ends an artist’s career, but until “Hurricane” appeared, this oh did!