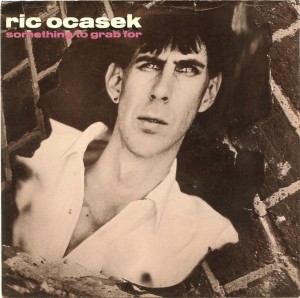 If “Jimmy Jimmy” was a space probe past the frontiers of “Panorama,” then “Something To Grab For” was the instance on this album of Ocasek keeping one foot on safe ground. It sounded for all the world like a song by The Cars. I had forgotten hearing this one but as soon as I heard the bass line on the intro, I immediately flashed back to the video which was all over MTV at exactly the point where the shiny new channel was a fixture in front of my eyes for long hours at a time. I never taped that clip or really payed attention to the song, but 38 years later it acquitted itself nicely as a song on caliber with some of the more interesting parts of The Cars’ catalog. The wildly Easton-esquer guitar solo at the middle eight was probably down to guest player Fuzzbee Morse; though Casey Lindstrom of Boston’s New Models [Produced by Ocasek at his studio] was also credited for guitar here. I felt that judging by the later Morse solo on the album’s final track [that leaves no doubt as to credit], that the wilder riffage here and there, was down to him.

Then the album gave us the craziest outlier that it would offer with “Prove.” This one “proved” to me that Ocasek had been listening to Price during his imperial “Dirty Mind” and “Controversy” period where he mined a rich seam of hybrid New Wave/funk like no other. The irony was that Prince probably owned “Candy-O” at the very least. The minimal synth riffing was balanced with funky rhythm licks for a taut counterpoint to Ocasek’s nervy vocal. This was a case of an artist taking the license to so as far as possible from his wheelhouse on his first solo album. But the song veered away from cooler Prince territory when the backing vocals and ultimately, the MOR sax by Deric Dyer conspired to pull the song down into Hall + Oates milieu, ca. 1981. Not bad, but no longer Prince-like. But the song definitely tried to do something differently and since I’m all about ’80-’81 Prince, I actually like it. Your mileage may vary.

Alas, I can’t bring myself to say the same thing about “I Can’t Wait.” It was a twee hit of treacly synthpop [complete with a glockenspiel to give diabetics the itchy fits] that ultimately sounded exactly like a track from the “Philip Oakey + Giorgio Moroder” album… which I cannot stand! It lasted one play in my Record Cell. Fortunately, it’s followed by the sumptuous “Connect up To Me” which was present here on CD in the long 7:39 version found only on the cassette back in 1982.

In a word, wow! This was the best Ric Ocasek song ever! Yeah, even “Shoo-Be-Doo” has fallen by the wayside for me. It began with a motorik synth bass with a squelchy two-note riff straight out of “Autobahn.” The track simply shimmered with a gossamer darknight energy, thanks to a jittery sequencer ostinato vibrating through the track. This time the glockenspiel was right at home as the heart wrenchingly beautiful melody fully justified that touch. The intentionally off beat drum interjectionss added dark complexity here, as did the distancing filters on Ocasek’s vocal. The extended version from the cassette works out to a never dull 7:39 and the throbbing beat that never quit must have given Michael Sembello some ideas for “Maniac” the next year. But that tawdry trifle wasn’t fit to sit on the same shelf as this beauty. The extended coda moved, finally, to Bryan Ferry territory for this acolyte as the urgency and desire of Ocasek’s vocal joined with the heraldic synths to sit at the feet of the master. Hell, I’d say Ric’s in Blue Nile territory here, and this came out far in advance of ‘A Walk Across The Rooftops. I truly wish this song could never end, and for me, it hasn’t. It’s been stuck in my mind since last weekend. Happily.

Next: …A Pop Fly Into Left Field