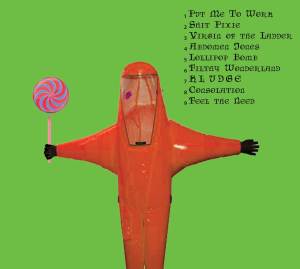 The B-side of the cover

“K.L.U.D.G.E.” was possibly the most Shriekback-like song here with the lurching big beat colossus at its core, but the little details revealed the cracks in the musical DNA sequences. While it had a Tokyo-crushing vibe that placed it on the same shelf as your basic “Nemesis,” the wheezing harmonica distorted almost beyond recognition somehow didn’t reek of The Shriek. The melodramatic piano somehow managed to eke its way to the fore on the second verse and establish a Liberace-styled beachhead on this stomper as Andrews Jupiter 8 [or a reasonable facsimile] gave it loads with a solo on the middle eight for a hint of familiarity. The whole bloody thing was so deeply into the red on matters of sound [and taste] that the almost gruesome breakdown in the song’s coda let the pitch shifted voices repeating the title sink into the bestial samples of panting and wheezing that ultimately signaled the song’s utterly tasteless end. If you’re going to wallow, wallow deep. I had been mistaken up front. There’s no way this would have ever been invited onto a Shriekback album.

Following that sweaty and hairy little freakout, it was time for this solo album to deliver its coup de grace. Quite frankly, “Consolation” is the song that Barry Andrews has been inching towards for the last thirty or more years. It’s a riveting ballad with no small amount of benedictive uplift albeit coupled with cold-eyed zen lyrics that outlay just how awful this world is that you are [hopefully] drifting through relatively unscathed. I can’t stop hearing this song in my head and it’s been at the forefront of my cranium for the last 72 or so hours. It’s a masterclass in songwriting and Mr. Andrews hung back and let us experience it without anything in the way of gratuitous special effects; letting the message sink in with a modicum of compassion as he explores the breadth of the subject title.

“Satan in a monster truck
Jesus on a bike
All these things are sent to test your mettle.

I hate to make comparisons, but this could be Mr. Andrews own “Hallelujah.” Of course he’s been writing and recording songs that had a similar blend of pathos coupled with a powerful facility of piercing the Veil of Maya… because he had to. I think with this song, Andrews had hit the bullseye with a song as strong as anything from Mr. Cohen’s pen. And I’ll wager that he didn’t take a year of contemplation to write it!

I have to admit, when I first saw this album and its contents, I saw the last song and was taken back immediately to the Bryan Ferry song from the sessions for “The Bride Stripped Bare” that eventually saw release seven years later as part of the “Windswept” EP. Imagine my shock when “Feel The Need” here turned out to be in fact, the same song! [Note: I’ve subsequently noticed that it was in fact from the pen of the Detroit Emeralds writer Abrim Tilmon who recorded this song a year before Ferry♥] The huge difference was that where Bryan Ferry produced in 1978, a song as slick as his coke mirror with all of that West Coast session monster mojo at his disposal, Mr. Andrews reclaimed the song this time out with a much more intimate approach. Simple piano. A little melodica. Sustained string patches. Glockenspiel. And a spectral hint of vocoder to echo the title in the chorus. It spoke here of a vulnerability that I’m sure Mr. Ferry himself would bring out of the song upon revisiting it today had not Andrews beaten him so roundly to the notion. The birdsong on the fade-in and fade-out could not have been more perfect as the album retreated to the shadows on an ephemeral note.

♥ – Memo to self: check out the Detroit Emeralds!

“Contaminated Pop” managed to follow a similar arc of emotional intensity as did the preceding Shriekback opus. Both albums began with a wallop to the skull with a 2×4 only to chill out; eventually rousing in intensity again at the three quarter point and ending on a mid-tempo to downbeat denouement. It’s interesting that when this project was announced, commenter and fellow Shriekback connoisseur JT mused aloud, “I wonder how this will differ from any Shriekback album from ‘Sacred City’ to when Marsh returned?” It must be said that several of these songs are redolent of the Andrews-driven Shriekback period that JT cited.

But near the midpoint, this story began to change, as Andrews explored differing sonic territory to that of the band mothership. The sounds explored here managed to get this project a good half-step away from the established Shrieksound by either sticking to disarming simplicity or by bracingly eschewing taste and restraint all together. Lyrically, the artistic POV they evince still reflect the mature, Andrews who had been refined in the crucible of Shriekback for these last nearly 40 years. After all, you can take the man out of Shriekback, but you can’t take the Shriekback out of the man. Even so, it must be said with “Consolation,” that he has set the bar of his songwriting to a very lofty standard while communicating the emotional payload of the song in simple ways alien to the Shriekback modus operandi of dark shadows and jagged edges. If he graces us with another solo album, I would like to see him move further from his normal jumping-off point of musical complexity and to dare to be as direct and candid as he achieved on “Consolation.”

We now have time for a quick intake of breath before it’ll be December before you realize it and the next Shriekback album will be upon us. For many long years I looked at the Shriekback section of the CD racks in my Record Cell, pining for more than the handful of discs that were populating it for so long and now, when most bands I like still operating laboriously, crafting an album every five years or so, Barry Andrews and Shriekback are in the middle of a long and robust second wind of high productivity. Thank goodness.

Postscript: This latest salvo from the mind of Barry Andrews is now available in the Shriekback web store, so ease the anxiety and purchase here.