Posted on January 9, 2019 by postpunkmonk

I’ve been lax on the Bryan Ferry front for the last few years. My wife got me “Frantic” and “Avonmore” as gifts and I really liked them. “Frantic” had a great casual feel that Ferry usually hammered down nine ways to Sunday by the time an album left his clutches. “Avonmore” had some surprisingly affecting material on it. I bought “Olympia” the year of its release but rarely listened to it. It was redolent of the labored Ferry aesthetic that delivered diminishing returns to me by this time. We all know that he can mix eight top session guitarists in a single nebulous song if he wants to. He does it often enough. I only bought his “Dylanesque” album this year, but found it to be as bracingly direct as “Frantic.” 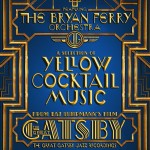 What was missing from my Record Cell were the 2012 and 2013 projects by The Bryan Ferry Orchestra where Ferry oversaw hot jazz versions of his songs [solo and for Roxy Music] with his long time musical director, Colin Good [right], arranging the tunes for a well appointed jazz band. Good had entered into Ferry’s orbit with 1999’s “As Time Goes By” album of vintage swing band covers. He’d since stayed close to Ferry and Roxy Music. I was lucky enough to have seen that Ferry tour and the large jazz band transformed the material in delightful ways. It remains my favorite Ferry concert.

This album had its origins in the soundtrack for the Tom Tykwer German series “Babylon Berlin,” set in the time of the Weimar Republic. Six of the songs here were recorded for that project, and Berry and Good have fleshed out a full album of performances that were all in the same vein for this new album. I visit bryanferry.com every few months seeing what might be up and I was dimly aware that this was in the works to release in late November but it passed my thoughts by until I saw a copy in Earshot Music, a week or so ago while visiting Winston-Salem. I snapped it up not having heard the previous two Bryan Ferry Orchestra albums, owing to never having seen them in a store while shopping! I could not have been less prepared for the impact that these new/old versions of Ferry’s canon would hit me with.

“Alphaville” has been transformed and focused far beyond the original version. It now had a relentless clarity missing from the earlier take. The muted cymbal crashes are like aural catnip. Ferry fosters intimacy in the listener with his hushed, semi-whispered delivery and draws me into the music. I can’t say I ever remembered the original version, and when I listened to it again after some years, after obsessing on this version, it was far inferior to this. We didn’t know how badly we needed Bryan Ferry songs with prominent tuba accompaniment. The following “Reason Or Rhyme,” also from 2010’s “Olympia,” wasn’t as dramatically re-thought. Both versions were compelling but I have to love the boozy trumpet that weaves through the song. Ferry’s fragile croon here seems almost identical to his performance on the other version.

“Sign of the Times” was never one of my favorite Ferry solo tracks, but here, it has also been transformed into a jaunty instrumental hot jazz rondo with different instruments trading off on soloing for each “verse” of the song. It begs me to listen to it unspooling in my mind for hours of the day. I can’t say I’ve ever thought much about the 1978 version.

Interestingly enough, there were three songs here from Ferry’s 1987 “Bête Noir” album that took me a [long] while to warm to. Maybe Ferry also had issues with the very 80s production courtesy of Chester Kamen and Patrick Leonard. “New Town” began with the same gravity of the original, but transformed into upbeat swing during the alternating chorus/verse structure. The percussive detail here revealed the freshness of the century old jazz vocabulary employed.

“Limbo” was always one of my favorite mid-80s Ferry songs, and I found it the acme of “Bête Noir,” but the acoustic instrumental tango here was more assured and focused than the hazy absinthe vibe of the original. The fruity clarinet solo stood out in relief to the muted horns accentuating the rhythms of the song.

The linchpin of the project as befits its placement in the middle of the program was the title track, “Bitter-Sweet.” The whiff of Brecht + Weill was always in the bones of the Roxy Music artistic DNA. That was never more explicit than in this song. The march sections of the tune where the song takes flight, capably raise goosebumps on me to hear how it has been returned to its Weimar roots. The song, which was an early seventies outlier to the influence of Bob Fosse’s “Cabaret” on Rock music [not to be dismissed as a meta-influence to both the glam rock and new romantic movements] was returned to its roots here, and the climax where Ferry sings the final devastating words has never been more powerful.

After the dark emotional peak of the album, “Manifesto’s” surprisingly lightweight pop hit “Dance Away followed as an upbeat palate cleanser. Roxy Music didn’t usually trade in upbeat romantic tropes and this single was one of their few light hearted assays of the pop song form. Listening to it here, one can certainly imagine the swells cutting a rug to it. The last of the “Bête Noir” songs, “Zamba”sounds the closest to the original recording for my ears of all of these tunes. Since the original was also string-led, this one is still a delicate sketch of romantic chiaroscuro.

“Sea Breezes” was the first of three songs also taken from Ferry’s first album; 1972’s “Roxy Music.” This instrumental retains the binary character of the original, thought the ‘chorus structure” aims for a higher contrast with a dixieland strut that saw the tune dancing on the sunny side of the street… only for the minor key verse to keep returning the song to the edge of despair.

“While My Heart Is Still Beating” was a daring pick from the “Avalon” project. The brash vulgarity of the muted trumpet contrasted mightily with Ferry’s delicate croon. His vocal here was in a rare turn in the spotlight. The noir sax in the coda traded off licks with the trumpet most slinkily.

Did I say that “Zamba” was the least changed song here? No, that would have to be the impeccable instrumental version of “Bitters-End,” the 1972 outlier to this very album;  recorded 46 years in advance of this version. Once more, the jarring context of the original appropriation which was so foreign and alien in 1972, has been returned to its rightful milieu.

“Chance Meeting” creeps in the shadows as the song structure is another of the binary structures that Ferry favors with the somber bass clarinet dominating in the downbeat sections of the song. I absolutely love the false ending halfway through where the original became a death march of morbid doomed romanticism, this version instead shocks by employing an up-front jaw harp and heightened clip-clop percussion to its faster tempo coda.

The longest song here was the pensive title track to Boys + Girls which crept more than halfway to the five minute mark. Most of these tight jazz arrangements would have fit comfortably on one side of a 78, their ultimate sonic home, but not this one.

Ferry retooling his solo/Roxy oeuvre for hot jazz works like a fiend for me. There was always Brecht/Weill in the Roxy DNA from day one, and this was now fully explicit. The music was remarkably vital and there was none of Ferry’s penchant for overwork and overthinking. This was riveting in its direct simplicity. Ferry’s vocals, having seemingly withered away in strength for the last twenty years [my wife first noticed this in 1999 with “As Time Goes By”] and now he sounds like he might have emphysema but he doesn’t resort to distancing effects here, like a Rudy Vallee megaphone, which would have moved the needle in to the kitsch zone. Instead, Ferry puts his frail sounding vocals, dryly up front, accentuating the heartbreak inherent in most of the songs well beyond their initial takes.

One was also left with a look at the full breadth of Ferry’s art and one must consider that he has always been a remarkably consistent songwriter who has focused like a laser on the subject of melancholic heartbreak, but the conceit of dropping these songs into a nearly century-old jazz palette that encompasses swing and even hints of dixieland renders them an emotional clarity that refuses to wallow, as did some of the original works. There is a vivaciousness here of a way of looking back without a hint of emotional [if not musical] nostalgia. It is the entirely appropriate work of a 73 year old musician who has plowed his artistic furrow for almost half a century without becoming adrift. I only wish he would take this band and songs on the road. I’d find time for one more Ferry concert.