Book Week – The Clash: The Clash

I was not the biggest Clash fan around. I still have never heard their first or second albums [ducks] though I was aware of the first one from at least the point where it was released in the US. I was such a non-fan, that I never saw copies of “Give ‘Em Enough Rope” in stores until way after “London Calling” was out! So to my teenaged ayes, I thought “The Clash” was their first album, with “London Calling,” their second. The second album was a double album, and when “Sandinista!” dropped with three discs in its sleeve, I was incredulous. Would their fourth album be a quadruple vinyl set? At that rate, yes. So obviously, I was a good target for the 2008 coffee table book “The Clash” by The Clash. 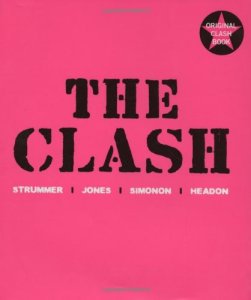 I did always like the punk embrace of bright neon pink; perhaps an ironic appropriation of color via the seedy origins of the word. I’m sure it was calculated to cause maximum Dad Outrage®, yet was not as problematic and wrong as the similar use of the swastika. I saw this hard to miss book in a record store visit last year, Since it was selling for just $5 [a price sticker inside from its original sale put it at $45 – a bargain for a book produced to this standard] I bought it without a second’s delay. This was one of my favorite things; a fat, hardcover coffee table book produced in a visually appealing way about a band that I liked. The conceit of it was that it was by the band. Technically, yes, but really, it was a book that had an editor more than a writer. All of the text was quoted from the band members, so this also got around the sticky problem of Joe Strummer being dead for six years by the tim that this was published. With the band members quotes being the enormity of the text, it really points to the editor of this book as defining its flow and arc in ways that probably count as more writer than editor. 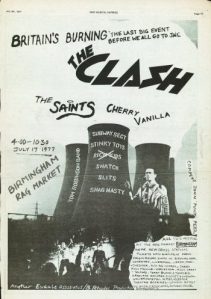 The balance between text and graphics was near equal, with the large format, full pages often being given to the reproduction of single photos taken from the band’s history. Black and white photos were the order of the day, but even the color ones here, looked B+W! There was just not very much hue information in late 70s England, I guess. Other prominent visuals were given to the band’s posters and flyers; sprinkled throughout the book with full tour date information for every tour they ever undertook duly listed in full. All of this followed the band’s timeline, so this was very traditional compared to the Grace Jones book we discussed yesterday, which follows a very crooked path.

Since I was practically a Clash newbie [in spite of having previously read a Strummer bio “Redemption Song: The Ballad Of Joe Strummer” by Chris Salewicz – which also was published in 2008] I learned quite a lot about the band which was marginalized or even not included in the Strummer book. I can’t believe that I was not aware that Machiavellian manager Bernie Rhodes was out of the picture for almost two years when the band were beginning to make inroads in America in ’79-’81. Of course, once Rhodes was back on board, they reached critical mass with the “Combat Rock” album. A record I never much cared for as an album but it certainly moved units in Reagan’s America. 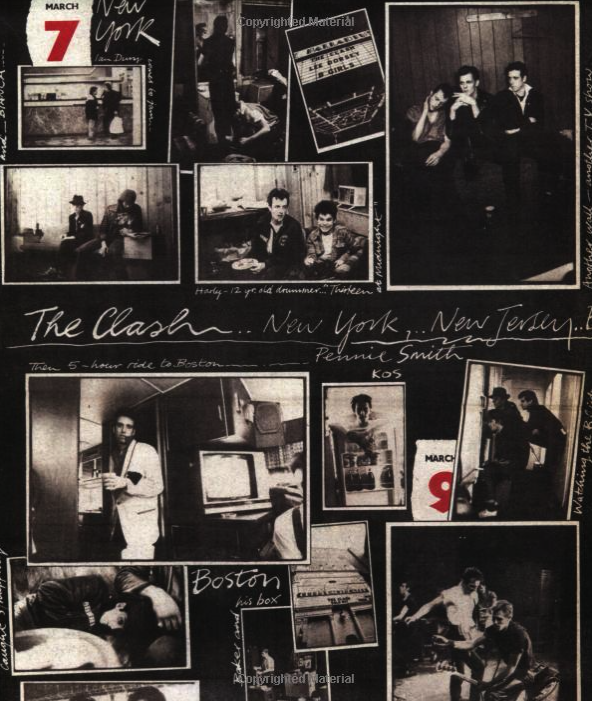 Some pages were collages of a place ant time

The dismissal of the Strummer/Simenon “Cut The Crap” album within a scant half page as if in passing spoke loud volumes here. Similarly, even though Terry Chimes was the original drummer for the band, who later rejoined when Topper Headon’s drug habit got him sacked in 1982, the thrust of the book cites Headon as the primary drummer for the group. It’s his name on the front cover with Simenon, Strummer, and Jones.

In a way, this book is something of an ironic construct. The Clash were very political punk ideologues. Seeing them as the focus of such a fine consumer product as this hefty tome sends me mixed signals, even as I appreciate the effort carried out [and willingly bought it. I can perhaps take solace in the fact that this book initially sold for a modest $45 when I could have seen an asking price easily twice that. But then, that would have hardly been in the spirit of the band, which saw them selling a triple album for $9.99 in America by reducing their royalty rate by 50%. Who else would have taken such a financial hit for their principles? Taking that into consideration, anyone who appreciates The Clash will have much to admire here. Better still, the book is available as an e-Pub DL book for a scant $3.30 at Rocket88 Books right now, if you’ve got an interest.

7 Responses to Book Week – The Clash: The Clash

Leave a Reply to The Swede Cancel reply