Surprise! Just when you thought it was more OMD postings in store for your eyeballs, I felt the spirit move me to finally have a theme week here based on all of the book reviews that I have been planning to write for the last half of a year! I thought it would be better if I finally covered these tomes before they began to drift out of my skull. If you ever peek at “The Book I Read” tab on the menubar, then you will have a very correct idea of what will be covered this week. I must have gone over two years without reading any books [ostensibly to have more time to make CDs – hah!], then all of a sudden, in 2016 I got back into reading again. First up: Mr. Bowie. 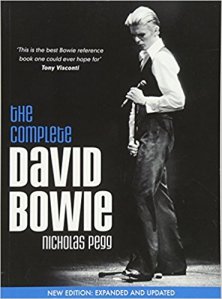 I have a few books on Bowie on the lone bookshelf in the Record Cell. I used to have a much larger library, but progressively smaller domiciles over time, coupled with a preference to focus on music [your best entertainment value] has seen me selling off large chunks of my library. My all time favorite Bowie book is still Charles Shaar-Murray/Roy Carr’s “David Bowie: The Illustrated Record,” which I first read upon its publication when I borrowed a copy from good friend chasinvictoria. It took years, but by 1990, I finally bought a copy of my own, which currently sits as a series of loose 12″x12″ pages in a clear record sleeve. I had chasinvictoria to thank again when at an unknown point in late 2016, this hefty tome arrived in the mail, unannounced from him as a gift. It was some time in early 2017 when I began to read it.

It took me almost a year to read it because it is the single most detailed artistic examination of the utterly complete career of David Bowie possible. The 800 page opus was the latest of a series that superfan Nicholas Pegg had been publishing in 2000 after beginning in 1997, just before the David Bowie Reappraisal® began following his Glastonbury performance. The book is strictly based on Bowie’s artistic output. If you want details of his personal life, please look elsewhere. It’s all about the art here! Every song he wrote is covered in detail. Every song he may have ever sung, even only live… once…at summer camp in 1958 [age 11], is covered in detail. Songs he wrote, but never released, are covered in detail. Songs apocryphally attributed to him [but ultimately not actually created by him] are covered in detail. Yes, it’s that kind of book!

The factual data is voluminous here, but adding interest is the critical appraisal of each discrete work by Pegg. The organization of the book is in coherent sections that would form normal length book in and of themselves. It began with “The Songs From A-Z.” Every song ever released by David Bowie discussed at length in alphabetical order. That’s the bulk of the 800 pages right there. Next came coverage of every album. Of course, the songs had already been discussed, so here he delved deeply into the whys and wherefores to each album, stuffing the coverage with background information and writing that gave each chapter in the Bowie discography a contextual placement in the overall arc of his career. It might be 8-20 pages per album here. And there were a lot of albums if you don’t miss anything. Official albums, soundtrack albums, guest appearances on other artist’s albums, Bowie compilation albums, and various artist’s compilation albums.

His live career is covered in detail that would make a whole other book. Nothing is left out since as I implied up front, it began with an 11 year old David playing a skiffle song at his Summer camp in 1958 and concludes with the heart issues that scuttled his live career. While many might have the wondrous “BBC Sessions” album that was release in 2000, that cherry picked the Bowie BBC material. Learn about what yo haven’t heard yet by reading this section of the book.

Bowie’s acting multimedia career is covered with every video he’s ever appeared in discussed at length, as well as his various forays into acting. All of his non-musical writing and art endeavors are examined. There’s a chapter on CD-ROMS and websites! And even more that we’ll gloss over for now. The coverage here was a blend of assiduous reporting and research but enough of a critical eye from writer Pegg to make the material an artistic evaluation in addition to a peerless reference book bar none. The only Achilles heel I could possibly point to here was the tendency of Pegg to put on an apologist’s hat for the indisputably weak work that he seemed to have found artistic justification for nearly every time. Every now and then, yes, it’s fine to see merit in something that a large number of people find fault with. Even admirable, if one could legitimately argue one’s case, but to paint all of Bowie’s gaffes [and he had his fair share of them] with that same brush is unrepentant fanism.

That factor remains the sole weakness of the otherwise impressive and remarkably thorough work. The timing of it was peerless, with Pegg writing feverishly to include the events and releases up to and following Bowie’s 2016 demise. The latest release covered at length in the book was the “Who Can I Be Now? [1974-1976]” boxed set released in late 2016. So by now it’s already in need of a new edition to cover all of the many posthumous releases just out in the last 18 months. Pegg writes touchingly about how a box of each earlier edition of the book was sent to Bowie for his review and the artist would always send one back with an inscription, lending a bittersweet tang to this edition, but if you hunger for a relentlessly thorough examination of the career of David Bowie, then look no further than this book, which sports a Tony Visconti quote out on the cover. Apparently TV  used earlier editions for his own reference! That says it all.