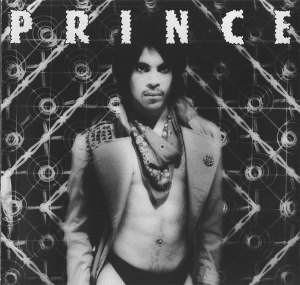 Gloryoski! I was just away for a few days, taking in a trip to the Atlantic coast and a Gipsy Kings concert. A block away from where we stayed was a record store, Gravity Records. With Prince in the forebrain in the wake of his sad, sudden death last week, of course the three Prince discs I had gotten last Fall were getting much play. I thought, that if I were lucky here, I might score a copy of “Parade” or “Lovesexy” in this store as they were imperial period Prince titles that were possibly available in used bins. When I got to the Prince title card, I saw there was one CD still there, and, boy howdy, it was “Dirty Mind!”

This was the point of entry for me with His Purple Badness. I had recalled seeing a video from this album when it was a brand new album. I had also managed to see the issue of Rolling Stone magazine where they gave the lead review to this album. I still recall the sculptural illo used to accompany the rave review: a sculpted plasticine brain on the curb, in the gutter. After spinning this album this morning, I can state with all certainty, that it was a video for the title track that I saw way back when. Listening to it now, for the first time since 1980, I was struck by the fashion that Prince fused funk with New Wave here with motorik beats motivating the song’s unceasing forward movement. As the tune was equally unencumbered by details like a chorus, which would have just been a drag on its progress.

I have been hearing covers of “When You Were Mine” since about two years after this album came out. Everyone from Mitch Ryder to Cyndi Lauper had made this one into a standard right out of the box. My favorite cover of this was the bonus track that appeared on Cristina’s “Sleep it Off” DLX RM CD, back in 2004. Finally hearing the Prince version of this one is almost surreal to me. It should not have taken this long! I was impressed by the jaunty New Wave bop of the track with not an ounce of funk it it. The widening of artistic scope on the album was palpable as Prince really started moving forward from the R+B/funk which was his foundation. All of this taking place during a time that the notion of “crossover” was yet to pack the punch that it would later in the decade. Meanwhile, Price was laying the groundwork for a generation of artists to follow in his footsteps in breaking down the then-rigid barriers that separated racial and class elements among listeners.

The album’s most dazzling single kicked off side two, as in the tradition of the day. “Uptown” was a euphoric funk jam that was lip-smackingly tasty. This one was perhaps less New Wave influenced than the material on side one. This one sounded more influenced by the progressive camp in disco/funk such as Parliament. Has there ever been a more contagiously fun lyric than this one?

I was surprised to hear the songs on side two segue together with cross fades and hard edits used to make it move like a suite. I remember the ruckus that the tracks “Head” and “Sister” raised back in the day. As for “Head,” wasn’t rock rife with tracks like this that used coded language for paeans to oral sex? All Prince did was strip out the code. What really mattered was that the song remembered to cook. As for “Sister” and its still taboo-breaking tale of incest, the shock value of the song was its alpha and omega. The brief [1:33!] number can’t be said to have stuck in my head after a single listening.

Fortunately, the closing “Partyup” remembered to couple a smoking groove to its surprising anti-war lyrics. The taut coda to the number consists of Prince delivering what sounded like military cadence rhymes decrying war and the will of the public to fight it before the song’s shock cold ending brought the album to a close. I would not be surprised of The Clash were listening to this before writing their “Sandinista!” classic “The Call Up.”

I have not heard the full albums of “For You” and “Prince” that preceded this in the marketplace, but from what little that I have heard from them, it seemed like this was the album where Prince really started spreading his wings to encompass any damn thing he wanted to. Most of the album relied on live drumming but there were inroads that drum machines were making here and there that by the time of his next album, “Controversy,” would see any acoustic drumming relegated to the sidelines as Prince began soaking up very hip New Wave and Post-Punk sounds primarily from England.

The visual contrast in packaging could not be more abrupt as well as with the soft-focus R+B of the first album and the straightforward 70s portraiture of  the second gave way here to the visceral and provocative image of this diminutive sybarite against a background of bedsprings and barbed wire. It was an image that could not be ignored. In every way, this was the album where the Prince Story truly began in earnest. In two albums time, everyone would know it. By the third album following, superstardom would be his on a platter.