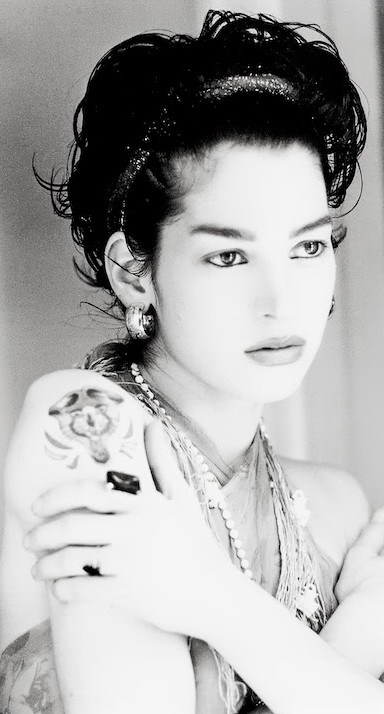 This last weekend I got pulled into the orbit of planet Holly Beth Vincent. A play of “The Right To Be Italian” led to her entire canon as it exists in the Record Cell getting repeated play and one song in particular has been in my skull and it just can’t let me go.

I’ve loved her second album after my friend Tom [finally] convinced me to give it a listening after years of being wary of its stylistic deviation from the punk pop/girl group perfection of “The Right To Be Italian” into the uncharted waters of album number two, “Holly + The Italians,” which sounds like only itself. The joy was that it did this brilliantly. And as far as I can tell, never more brilliantly on that album than on the stunning “Unoriginal Sin,” though several tracks certainly give it competition. At the end of the day, there has been only one song that I’ve played all weekend [and even right now] that I can’t get enough of and that’s the one.

It began subtly with a strummed rhythm guitar that was joined two bars in with bass [Bobby Collins – Ken Lockie, Blancmange] and drums [Kevin Wilkinson – League of Gentlemen, China Crisis]. The pacing was slow and deliberate. As the song ramped up to the first chorus, it featured Bobby Valentino [Fabulous Poodles] on violin adding dramatic counterpoint to the rock instrumentation. Then fell back to the incessant rhythm strumming, sounding like a small group of cellos, with the drums getting subtle fills to propel the song forward until the second chorus began at the 2:30 mark. Then the violin returned along with rhythmic piano grounding the tempo as the violin circled around it and plateaued with a plaintive solo that led into the intense and personal verse three, where it stayed through to the third chorus.

Chorus three was where the entire song built up dramatically with a fortissimo power that was truly moving and palpable. Here, Ms. Vincent added more lyrics to the third chorus which finally culminated in the appearance of the song’s title repeated through to the fadeout to attain a singularity of powerful feeling with Valentino’s violin soloing and also multi-tracked to attain a truly orchestral feel. The passion of this number is gripping. I’m still not done listening to it over and over, if not on disc, then definitely in my head, as I fall asleep and wake up to this magnificent song; surely one of the finest in my Record Cell? How many other 6:15 songs does one listen to that sound far too brief?

To shake things up, I’ve also been listening to the demo version, which was thankfully released on the amazing “Demos Federico” album in 2009. The demo here was dramatically different with presumably Ms. Vincent playing all of the instruments for the Portastudio demo. For one thing, the tempo was 50% faster, and the climactic verse three was not yet part of the song, so the end result was just four, very different minutes. The violin and piano that made the LP version so compelling were absent here, but the rocking tempo and reliance on crunchy guitar ala Holly + The Italians still marked the song as a complete winner, though the depth that came through the intense third verse and the differing arrangement only added more to the already substantial cards on the table even at this early stage.

As I was listening incessantly to the compelling, strummed rhythm guitar tempo of this song a small lightbulb went off over my head. Where else had I heard this exact sound? A few minutes of incubation led to the answer popping up. Three years after this song was released, a Boston post-New Wave combo called Til’ Tuesday appeared with a debut single that had exactly the same sound and tempo. You may have heard the song, “Voices Carry.” It was a smash and took them to the top ten of the US charts with a sound like a [highly] commercialized version of “Unoriginal Sin.” The minor key synths of that song come up short against the tremendous violin of Bobby Valentino, who proved that his sister [Anne Dudley] was not the only one in their family with a mastery of strings. I can’t believe that Aimee Mann didn’t have a copy of “Holly + The Italians” in her racks. The similarities were just too strong. My final proof? Both records were produced by Mike Thorne. Case closed. Aimee Mann wanted some of this mojo. She got the hit, but Holly Beth Vincent got my heart.