On June 24, 2015 I happened to mention that I had not heard this album. Just two days later, commenter and close, personal friend chasinvictoria sent a copy screaming to my doorstep, much to my shock and surprise! I’ve been listening to it for several weeks, and I’ve got to say, it’s a corker of an album that I probably should have owned for 36 years! But I’m so lame, I never actually owned a copy of “The Age Of Plastic” until I finally bought it on US CD in 1988, so I throw myself at the mercy of the music court!

The Cherry Red CD of 2009 was the first version of the album originally called “English Garden” in the UK that actually featured the original tracks from that 1979 issue. Earlier CDs from 1999 [UK] and 2001 [JPN] apparently used the different American version for the mastering source. That may be the version that you are most familiar with, but to this day I’ve still not yet heard it. When I cued the laser for track one I was presented with an album that fully reflected its cusp of 1980 origins. The superb title track featured a beat ripped right out of the “My Sharona” playbook, albeit a far more sophisticated final product than what The Knack were selling back then. That had been a repulsive ode to the joys of chasing “jailbait,” but this was in another class entirely. Woolley’s tense vocals capture that perfect “age of anxiety” feel that was flowing like a river at this time in the zeitgeist. The counterpoint of the guitars and keyboards to the jumpy backbeat was memorable and featured a great middle eight Moog solo by the recently named Thomas Dolby; the Camera Club’s keyboardist. The full octave portamento that Woolley indulges in going into the chorus from the following verse gives more than a hint as to the substantial vocal range at his disposal. The arrangement of this song wastes not a second as it clocked in at a perfect 3:00 with no fat on its bones at all. 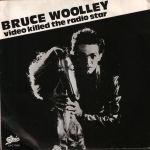 Then the first released version of “Video Killed The Radio Star” made its debut to these ears. It had substantial differences to The Buggles hit version. First, at 2:45 it was only a fraction of the length of The Buggles version. While much of the arrangement, was similar, the modus operandi of the respective creators was quite far apart. Trevor Horn went for a techno kitsch appeal that lay the affectation on rather thickly and heavily stylized. Both versions have the singsong chorus, but only Horn dared to add the “ooh-ah, ooo-ah” backing vocal hook.

More intriguingly, Woolley opted instead for an ascending Latinesque guitar hook that was less cloying to these ears. Woolley’s original second verse makes explicit the song’s crux being about radio versus television acting; not music at all. If I could make a description by way of comparison, the Woolley version plays more like the guitar version of Thomas Dolby’s “Radio Silence” as compared to the “all-synth” version cut with Daniel Miller, comparable The Buggles version; with the proviso that with “Video” the case of which I prefer is much cloudier. The Dolby synth version of “Radio Silence” was instead, a clearcut winner to these ears.

“Dancing With The Sporting Boys” features a loping, rolling beat that sets off Woolley’s ascending vocal acrobatics most delightfully. By the time of this track, it’s apparent that his vocal prowess knows few bounds and his powerful, yet reserved voice provides the sort of kicks that suggest that his formative years were spent listening to Russell Mael of Sparks seduce a susceptible nation in the 70s. Woolley’s liner notes reveal as much in the booklet within. Not everyone can go traipsing off in Russell’s direction, so it would appear that Woolley’s grasp falls within his reach.

Next came another song co-written with Trevor Horn that didn’t also appear on the subsequent Buggles album as did “Video Killed the Radio Star” and “Clean Clean.” “Johnny” was only vaguely related to his cohort who rode the monorail on The Buggles album. This tune was a bobby sox ditty about a heartbreaker on the band circuit that Woolley and Horn met up during their formative years. What is speaks of was the truth that both Horn and Woolley were professionals, who were eking out their crust while doing decidedly unglamorous jobs on “the circuit” before their respective grabs at the brass ring within months of each other as 1979 segued into 1980. When the New Wave hit, it served as an inspiration to hordes of journeymen musicians who were way too talented to pass muster under the aegis of punk rock, but who liked the more stylish cut of the leaner music that followed. I’ve said more than once that New Wave was the 60s with the newest technology and a track like this proves it.

If these tracks thus far were perfectly redolent of their 1979 milieu, then the next song threw a curve ball. “No Surrender” from the very first bar was every inch a mid-period Be Bop Deluxe tune! It straddled the post-Glam/proto New Wave aesthetic so tightly that Woolley’s vocals could do nothing more than emulate Bill Nelson’s phrasing like nothing I had ever heard before. The look backward was surprising, but it was all done so expertly, that I could only gape in wonder. As much as I enjoy Nelson [and Be Bop Deluxe] I can’t say that I ever hear their influence, sadly.

Woolley cops to the fact that “Flying Man” was influenced by The Dave Clark Five’s “Glad All Over,” but he’s just being disingenuous. Another band that I dearly love that I can’t say I’ve ever heard influence anyone else were The Rezillos, but that is exactly what happened here as The Camera Club track “Flying Man” sounds 100% beholden to the hyper-kinetic cover that dropped the year earlier on “Can’t Stand The Rezillos.” The tune kicks the energy levels to the max here for a furious burst of energy when coupled with the next song, “You Got Glass,” which keeps up the pace frenetic of the prior song.