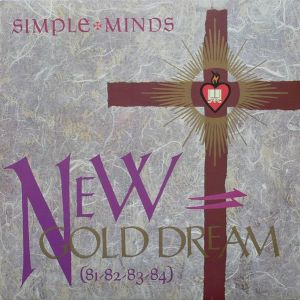 Last post had a comment from Echorich stating that “Malcolm Garret had his finger of the pulse of the 80s.” With their next album, one might be tempted to say the same… except it more accurately reflected the 1380s! The cover of “New Gold Dream” made an incredibly bold statement at the time. Who else in their right minds would release an album that looked like it belonged in the sacred music section of the store, yet was the work of a Post-Punk band at the acme of their powers?

Designer Malcolm Garrett had tread lightly on this Pre-Reformation aesthetic with the cover of the pre-release single, “Promised You A Miracle.”

The calligraphic fonts, the handmade paper, and the cross formée were but a hop, skip and a jump from the full blown sacre coeur crucifix as found in France. The use of the metallic fifth color on the sleeve, managed to take it way over the top. I have to admit that I still don’t have the original UK pressing of this. Mainly because the US pressing went far in taking it to the extremes that paid off in spades. The US pressing was on transparent vinyl with marbleized burgundy and gold shot through the vinyl. And it was a $6.98 list price! If there were any imports in US stores, I never saw them.

The US edition trumped the original in almost every way. The labels were night and day superior, with the art department of A+M Records taking the time to build on the overall look in a dramatic way. Compare the UK labels to the US one.

You might think “game over,” but wait… there’s more. Now how much would you pay? 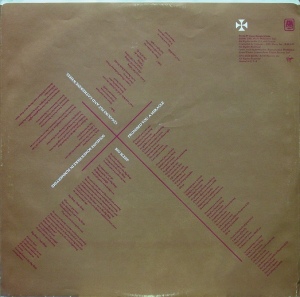 The US inner sleeve was on gold paper like the UK pressing [can’t find an image, sorry], but the US sleeve featured the lyrics in a clever layout that managed to make this album a powerful, cohesive whole that threatens to go over the top. All of this looks like so much hyperbole, but not after you’ve heard the album within that package! I’ll never forget the first time I bought this and brought it home to play. I was thunderstruck by the synergy between the music and packaging. Over the ensuing 33 years, I’m even more in awe of the music, which stands alone as an even more spectacular achievement than the admittedly fine design work.

There is a single dramatic variant of this plush, albeit Christian-oriented cover art. When Non-Alignment Pact member state Yugoslavia licensed the album, the state run Jugoton label balked at this and remixed the cover art into something a little more secular.

Next: …More covers to go [I’ll try to hurry]