I enjoyed the first album by Die Doraus Und Die Marinas as reported during NDW Week last year. So last Saturday when I came across a cache of albums by Adreas Doraus I was up for any and all of them. The second album [“The Doraus and the Marinas Giving Open Answers To Burning Questions” – in English] more than fulfills the promise of the debut with design and production by all members of Der Plan [Moritz Reichelt, Frank Fenstermacher, Kurt Dahlke] as well as drummer Moritz Von Oswald of Palais Schaumburg. Andreas Dorau co-wrote the bulk of the songs with Fenstermacher. The result takes the tentative steps of “Blumen Und Narzissen” and carries it forward to a more commercial realization of the loopy thrust of Der Plan albeit with a radio friendly veneer. There is no shortage of melody or inventive ideas to delight the ear. 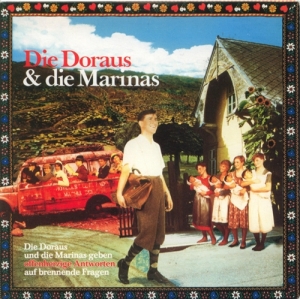 The first track [and single] “Das Welt Ist Schlecht” is impossibly jaunty considering that the title states “The World Is Bad” in German. The energy level bursts the album out of the starting gate and the chorus of “la-las” that Dorau and The Marinas offer propel the number forward with a youthful intensity. When the song comes to a startling end with the sound of a clattering explosion one can only applaud in approval.

The rhythmic input of Von Oswald has brought with it state of the art drum machines that give this music a paradoxical heft even as the ideas and execution here are largely playful and ebullient in their creative juxtapositions. The track “Texas” as a case in point as this was certainly the first time [1982] the world had ever heard breakbeat editing cheek by jowl with furious banjo picking. Somewhere, the Beastie Boys were taking notes.

The initial album had a hint of 2nd wave ska influence in it that I found intriguing but that’s nothing on this album! The horn section [Trumpet – Helge Gabrecht, Saxophone – Christian Kellermann] create a full sound here that sounds inviting even as it evokes both second and even first wave ska, particularly on the slow tempo, lo-fi rude boy skank of “Sandkorn” which reeks of 1963, complete with steel drums. “Agent” reeks of early Dexys via Two-Tone and I challenge anyone to not seriously dig its vibe. “Feierabend” re-connects the blue beat back to Europe with accordions drawing a line between the oom-pah polka beat and the skanking bounce of ska.

The bonus material on this disc is really spectacular as well. Only the non-LP A-side “Kleines Stubenmädchen” has been previously released according to what I can see. Elsewhere, “Die Welt Is Schlecht” is present in a fantastic dub version as well as an alternate version under the title “Höllentingeltangel.” After this album, Andreas Dorau went “solo” and his classmates Die Marinas went their separate ways, but I have several more of his albums to hear and look forward to it with relish.