I had come across references to Scritti Politti during their Rough Trade chrysalis period but had never managed to actually hear any of the music. Or see the records easily available, come to think of it. What finally opened my ears was the playing of the video for “Wood Beez” on MTV’s “London Calling” program and I was dazzled by what I’d heard. This was achingly precise hitec synthfunk that didn’t sound like anything else out in the 1984 marketplace. Against all odds, singer Green Gartside managed to grow his lair long in 1984 [just like everyone else] without losing all of his special powers. Sort of like Sampson in reverse. Better still, the mid-Eighties in all of their car wreck glory were barreling down the main highway like a swerve-crazed drunk driver and here was a record that soared above the morass of Post-Punk Big Names shattering and falling like clay pigeons. I loved what I’d heard; to put it mildly.

At the time, US Warner Brothers had signed the band Stateside and had helpfully released a domestic single combining the UK 12″ A/B mixes of the “Wood Beez” single as well as its follow-up, the equally shimmering “Absolute.” I quickly bought my copy. What we Yanks missed out on was the third single from this Imperial Period of the band; the percolating confection that was “Hypnotize.”

By the Fall of 1984, I had the CD of the astonishing “Cupid + Psyche ’85. Virgin had helpfully included four version mixes from the first four 12” singles that orbited this mothership of a release. But the long mix of “Hypnotize” that was included on VS 725-12 was conspicuously absent. I resolved to hit the bins and to correct this glaring omission.

And good thing, too, because the long mix, though only taking the song from 3:33 to 4:24 managed to pack into that extra 50 seconds, the most potent ammunition any 12″ single of the period could pack; an extra verse trimmed from the 7″/LP mix of the same! The excised verse has the wonderful lyric “you hit below the Bible Belt” and clearer thinkers may wonder why this gem was deemed inappropriate for the LP version of the song. Maybe, they wanted the 12″ to retain some value after the CD [which included the version mix] was issued that Fall. 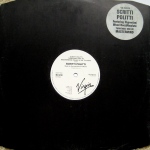 So that ensures that the 12″ of “Hypnotize” retains value even 29 years later since the 2xCD DLX RM of “Cupid + Psyche ’85” still only exists as a dream in my fevered imagination. One of these days I need to obtain the second 12″ of “Hypnotize” [VS 725-13] for the “Scritti Turntable Mix” on its B-side as well as the second 12″ of “The Word Girl [Flesh + Blood]” [VS 747-13] and then I can compile the “Cupid + Psyche ’85” supplement disc that Virgin still isn’t providing, much to my astonishment.