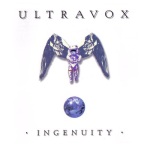 No sooner had the dust cleared on the “Revelation” album than news surfaced of yet another, completely new lineup! The next calendar year brought forth Ultravox [Mk IV for anyone counting] and this time it was a real band instead of Currie and a vocalist sharing all duties with a production maven. The group lineup dates from 1993, so Ultravox Mk III apparently crashed and burned before their sole album was issued. These gents all looked a good generation younger than Currie, but they add spice to the program and a sense of liveliness that was missing from the “Revelation” album [not to mention the “UVOX” album as well]. Key personnel were vocalist Sam Blue and guitarist Vinnie Burns. Writing credits, tellingly, were shared between all band members as Ultravox.

Intrigued at yet another form of this band, I put it on and was immediately rewarded when the elegant title cut came issuing out of the speakers. It starts with pulsing bass sequencers as Currie adds string patches as lightly as an airbrush to the proceedings. The synth leads are now Korg products, lending the sound a different coloration than with vintage Vox. Sam Blue was a huge leap forward as a vocalist from Tony Fenelle. He hits closer to the Midge Ure mark while actually sounding more like King Crimson’s John Wetton to these ears. Far more enjoyable than than Fenelle’s whiff of Richard Page [Mr. Mister]. The title cut was the best thing I’d heard with the Ultravox name attached to it since “White China.” Things were looking up!

“There Goes A Beautiful World” was another winner with a vivacious guitar line cutting a swath through the animated number. It proffers a livelier pace than did the languid title cut and one os left with the thought that this could work out rather well if they can consistently pull it off.

Currie’s viola makes an appearance on the third track “Give It All Back” to excellent effect. It slows the pace slightly from the preceding track and compensates by enhancing the riffage inherent in the track. In fact, one thing I must say about this version of Ultravox is that they have mastered the pitfalls inherent in writing and arranging that most difficult of numbers, the dreaded mid-tempo ballad. “Future Picture Forever” in other hands could be a snooze in the hammock but they make sure that when the tempo slows, that their melodies are strong and durable enough to support the loss of energy. Having prominent viola doesn’t hurt a bit, either.

There are four of what I’d typify as mid-tempo ballads on this album and they are all memorable tracks that use the considerable talent at hand to make sure that other elements of the song and performance rise above any loss of collective energy due to the tempo. Variation in instrumental and vocal attack coupled with inventive and lively arrangements shows that this band are perhaps even smarter than Ultravox Mk II in this regard.

“Distance” could have been a dull, plodding Ultravox mistake, but the tempo of the song is moderated to begin slow, speed up to climax at the middle eight and return from whence it came for the coda. Again, the melodies used are strong enough to withstand this sort of treatment and a track that would have bored in lesser hands ends up being a memorable and valuable addition to the overall program.

Most of the drumming on this album doesn’t attempt to walk the Warren Cann walk in any way, but the pacing of two numbers [“The Silent Cries” and “A Way Out. A Way Through.”] do trade in the distinctive Ultravox urgency ála “Dancing With Tears In My Eyes” with the Vinny Burns’ guitar riffs in the former and pulsing bass sequencers in the latter giving these tracks a bit more “familiarity” shall we say, even as drummer Tony Holmes studiously avoids the Klaus Dinger beat. Bravo!

“Ideals” benefits from a buoyant arrangement that sees a galloping beat seasoned with Currie’s elegant piano trading space with Burns’ vibrant, stinging guitar leads. They almost save the best for last as the album concludes with Ultravox’s first instrumental since “Astradyne.” “Majestic” more than lives up to its name with throbbing bass liberally spiced with Currie’s streamlined organ leads making for a classic Ultravox instrumental that satisfies deeply. At 4:18 it seems like a tease.

I was tremendously impressed with this album, given the contemporary context of  ultimately dissatisfying Ultravox albums since 1982, really. The passage of nearly 20 years has done nothing to diminish its honest and considerable achievements. Here’s a telling example of its strengths. Almost all of the album’s songs are 4:20 in length and the material is so good, paced so carefully, and arranged with such flair that this goes unnoticed when playing it! I can’t tell how many albums I have where the maker’s fell prey to the 4:20 syndrome, and when the material and arrangement is wanting, brother, that can be very tough going! This album glides by with no effort called upon the listener to meet the band anything but halfway.

This album more than passes the recall test. Can I pick up the CD case, and when reading the titles, remember what each of the songs sounds like in my head? Absolutely! No mean feat when you have thousands of CDs like I do! Unfortunately, this lineup of the band met with commercial indifference in the face of dreadful 90s grunge and techno. The oasis of sound they provided me with was regrettably short lived. With one exception.