Yesterday I dropped the ROCK GPA® graph of fate. Today I’ll get started on reviewing my rating for each individual album. Let’s begin, shall we?

Their debut album is highly derivative of Japan’s “Quiet Life” album. Particular their “Giorgio Moroder” period [“Quiet Life,”Life In Tokyo,” “European Son”]. “Girls On Film” has always been a drag for me to listen to. Maybe it was the sleazy video that pushed me over the edge on that song. Only Roger Taylor’s roto-tom solo gives me anything back. “Planet Earth” is best experienced in its snappy 7″ version. “Careless Memory” was a non-hit single but showed off the group’s ability to rock. The best tracks on the debut are highly melodic cuts that veer away from the Japan sound like “Is There Anyone Out There.” This was a song that really showed the band was capable of more than sequencer driven dance tracks. “Friends Of Mine” was a great example of “rock disco,” as it was called in the trades at the time. “Sound Of Thunder” takes the Japan/Moroder influence and manages to finally make it something of their own, with a jaunty urgency that shows them integrating the influence and not just imitating.

Their second album paid off in spades from the promise of their debut! There are no weak cuts. Stylistic influence for this disc went back from Japan to their mutual source of spiritual influence; Roxy Music. The scent of “Country Life” wafts in the sea breezes caressing the shoreline of this “Rio.” Most of the songs are filled to bursting with youthful enthusiasm and vigor. The propulsive drive of “Hungry Like The Wolf” gets me every time. It’s a song that by all rights I should be burned out on, but it’s always welcome to my ears. All of the songs here run a wide gamut from delicate ballads to driving synth rockers; leaving room for even for the arty experimentalism of “The Chauffeur.” They got massively popular with this album; and deservedly so. Could they do no wrong?

Apparently not. The “difficult” aprés-fame album came with a huge pre-sold audience who would have bought anything, for the most part. What must have been a lot of cocaine sounded like it went into the making of this record! The songs are weaker than those on “Rio” by a huge margin. How can you find time to hone songs when the whole world wants a piece of you [and vice versa]? The leadoff single raised red flags immediately. “The Union Of The Snake” was a flat re-write of “Let’s Dance,” which already had the distinction of being Bowie’s creative [though not financial] waterloo. The approach on that song typified the weaknesses of this album. The arrangement is cluttered with spidery and percussive details and not at all focused on rhythm and melody, which are the band’s strong cards.

He’s not normally my idea of a good singer, but Simon LeBon’s vocals here really get on my nerves. He manages to almost torpedo “New Moon On Monday,” one of the few bright spots here, with his attempt at a David Sylvian-like lower singing register on the first verse. Having only heard the repulsive Nile Rogers remix of “The Reflex” for nearly 30 years, I was taken aback at how much more musical the LP version was, though it still sports some of LeBon’s most annoying singing ever on the song’s chorus. Elsewhere, “Cracks In The Pavement” scuttles a likable melody with his slapdash lyrics and petulant delivery. “The Seventh Stranger,” the one good song here, sounds like what I imagined would follow the growth evidenced on “Rio.” Significantly, the clattering percussion and filigree that swamps most of the other tracks is held back here to allow the atmosphere of the song breathing room. I should mention that I listened to an LP copy [given to me by a friend years ago] of this album several times for the first time since the day it was released in order to write this post! Having heard some of the much larger train wrecks that followed this album in Duran’s career, I now rate it slightly higher than I did, back in the day. Even so, I’d always felt that the B-side “Secret Oktober” far eclipsed the music on this album and that opinion hasn’t changed. 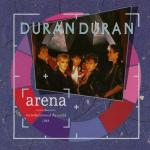 Duran Duran released this worthless live album as a quick followup to their Ragged Tiger world tour. They appeared in Central Florida but I had no desire to go. This album supports that decision. The net effect is of playing the first three albums on a sound system and recording the playback from the speakers. Only with worse vocals than the originals! There is no “vibe” here and the live ambience is all but missing. Only on “New Religion” are there any signs of life at all. Adding insult to injury, there is a new studio single riding this release. “The Wild Boys” was another track mixed into oblivion by Nile Rogers. It was almost Duran’s take on heavy metal, albeit tricked up with all manner of Fairlight effects and histrionic emoting by LeBon. For years I thought this album was better than “Ragged Tiger.” I was wrong.

Whiplash time! After the frenzy of “Arena” the band could get no bigger – so they fissured into splinter groups and doubled up their assault on the charts. Guitarist Andy Taylor said “sayonara,” as did drummer Roger Taylor and the group reconvened to plot their next move. Against all odds, it was a stunner. I was expecting nothing from Duran Duran and this album delivered sophistication, maturity, cohesion and it played to the band’s strengths while moving in a new direction. Surprisingly, Nile Rogers also produced this, but it remains my favorite example of his productions. It lacks the “plastic” sound that he typically brings to the table. The Borneo Horns [from the Saturday Night Live Band] add much flair to this recording. Of all of the bands who added a horn section in the mid-80s, [and there were many] Duran Duran clearly came out at the head of that class.

As with “Rio,” I can’t fault any of the tracks on this album. Like that album, it sports album cuts that are incredibly strong. “American Science” is a slinky number with great, interlocking horns and guitar counterpointing a delicate, haunting melody. Simon’s singing is spot on here with no bad moves made at all. His lyrics are miles ahead of their usual cringe-factor as well. Hearing the band attempt a Prince-styled falsetto funk number on “Skin Trade” managed to be charming instead of embarrassing. “Proposition” closes the album with a rousingly strong melodic flourish. This is an album than hangs together like an Armani suit and has consistently been a pleasure to listen to for all of the years since its release.

Having heard the singles from this and not the album for another five years didn’t prepare me for just how much growth the band evidenced in their songwriting maturity. For the most part. I feel that I might have rated this higher except for the following reasons. First of all, the turgid title cut that opens the album all but kills it in its tracks, right at the starting block! For all of the UK critics that lambasted the Power Station album as regressive heavy metal at the time, this track is sincerely that… in spades…and it’s bad heavy metal, to boot! It’s leaden sludge festooned with lyrics that certainly appear to be about Simon LeBon’s penis. Bad form, old sock.

Next came the band’s top ten single from the album, “I Don’t Want Your Love,” which flirted with house music in its choice of rhythms. It also sported a frenzied, metallic guitar solo from newly ensconced guitarist Warren Cuccurollo. The sound seemed to follow on from “Notorious” without gaining much and actually losing a lot of the subtlety of that album’s songs. The next single continued in that vein, but worse. “All She Wants Is” is a mildly annoying song about a panting woman with one thing on her mind. Tedious stuff, but a nice Dean Chamberlain video accompanied the single.

After these three openers finally came the song I’d been waiting to hear. “Too Late Marlene” is a subtle, attractive ballad well sung by Simon. This is the first track on the album than an adult would have written. Unfortunately, it’s followed by another “Notorious” outtake, “Drug [It’s Just A State Of Mind].” It’s not a bad song, but it’s sell-by date clearly relegates it to the previous album period. Following the incredible cohesion of the songwriting and production on “Notorious,” this album was shaping up like a punch-drunk boxer on his last legs, not the champ of the last round.

Then side two hits and [almost] everything is forgiven. The third single,”Do You Believe In Shame,” is a shameless ripoff of Dale Hawkins’ great swampabilly hit “Suzie Q.” Don’t just take my word for it. Ask the court who have now appended Hawkins and his co-writers as co-authors of this song in all modern pressings of the track. I never imagined in a thousand years that DD would ever re-write “Suzie Q” but they did – and it’s not bad. The lyrics and singing are a heartfelt tribute by the band to three of their recently deceased friends; two famous and one not.

What follows on this is the sumptuous ballad “Palomino.” This marks the point where Duran Duran have finally moved beyond creating something “pretty” to making something of real beauty. It’s certainly a high point of their songcraft. It’s then followed by the even more stunning “Land;” a song of such achingly tender beauty that it’s hard to imagine it coming from the same hands that penned the title cut of this album. It’s truly the band’s finest hour.  These songs on side two are so accomplished and beautiful, that I rate side one even lower in comparison. If this album weren’t such a patchwork collision of moods, abilities and feelings, it’s finest moments would clearly rank it among Duran Duran’s acme. As it stands, in the cold light of day, I have to give it 2.5/4 with reservations.

Next: That difficult middle period…