Posted on October 8, 2020 by postpunkmonk

[…continued from last post]
What took this CD remaster up to the highest level of interest were the well considered bonus tracks included here, doubling the number of tracks on the disc. Earlier CDs had always included the 12″ remix of “Sex [I’m A…]” but Rubellan Remasters really took this disc to amazing places. This time we got to heard the 7″ remix of “Sex [I’m A…] and the 3:30 edit was surprisingly, a drier mix with less reverb on Teri Nunn’s vocals. It’s still less than optimal listening, but I can’t deny it’s less obnoxious for its brevity. Not hearing Ms. Nunn deadpanning “I’m a slut” can’t be anything but good.

Better still, the US single’s B-side, the pixilated “Tell Me Why” was remixed in a tighter version that dove right into the high energy vibe and never let up after frantic drum fill kicking the song off. A wetter mix this time, with more reverb and synth hooks ping ponging from the left to right channel. Ms. Nunn’s BVs were mixed higher here and I have to say that I preferred the shorter single mix to the album version. The slightly dubby middle section was another rethink that I enjoyed hearing. If I can’t have the 1981 recording, then this was still great to have on the shiny silver disc. The mix here was actually 20 seconds longer than on the 7″ [which I have] due to the master having been faded early for the 7″ release in 1983. 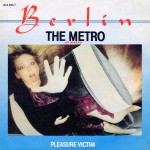 If I thought the 7″ remix of “Tell Me Why” was ace, then finally hearing the European remix of “The Metro” was a revelation. I’ve wanted this single for ages but the 7″ and 12″ versions were too rich for my blood this far on the marketplace. The 12″ extended remix is still a three figure disc. In the last year, it’s been possible to buy the Spanish/Dutch 7″ remix of “The Metro” for less than $40 [after shipping] but I’m so glad I waited for this CD instead. There’s little chance that whatever I would have sourced would have sounded any where as clean as this version, mastered from tape.

The mix here was profound. The slickness of the track was doubled with new EQ and effects. The handclaps were wetter yet it sounded like noise gating had been applied to them for a bracing effect. The drum track was beefed up considerably. Chorus had been applied to Nunn’s vocals. The uncredited mix showed how a track can be transformed dramatically with the right hands at the desk. Inasmuch as I was now loving “The Metro” the single remix had made a great thing that much better. “Pleasure Victim’s” origins had been a low budget indie recording that had been picked up by a major label once their success turned Geffen heads. It shad ported a d.i.y. production by the band’s drummer, Daniel Van Patten. The flatter original mix was now relegated to second class status.

The changes wrought to “Masquerade” on single remix weren’t so dramatic. But the mix also benefited from greater sonic depth as well. The mix was richer and deeper than the album mix without being substantially changed in sound. The 12″ mix of “Sex [I’m A…]” was here. more space in the mix with some looping in the long intro. The dubbed out break featured the hateful “I’m a slut” line for emphasis as the track dubbed out for a few measures with just the drum beat left. Before the moans of Nunn and Crawford appeared to make my flesh crawl. New rhythm guitar licks in the mix cannot even begin to make up for that unwelcome addition. I really hate music that tries to force me into the role of voyeur. The only slight hint of charm in the whole 8:10 occurred at the very end where a brief ad lib of Ms. Nunn was added saying “[guffaws] I think we hit orgasm.”

If I preferred the 7″ remix of “The Metro” the 6:21 extended remix, which was released in The Netherlands, Spain, and the Philippines [?] was a feast for the ears. The song still sounded better and had extensive new instrumental sections fleshing it out as well as a dubby percussion section based on the enhanced handclaps. The new ending was also a treat. It sounded like it could be mixed with Depeche Mode’s “New Life” fairly effortlessly.

The “Masquerade” 7:22 was a gift meant just for me. The extended remix was only ever released on the Japanese only remix CD “Dancing In Berlin” in 1987 and that one was always too pricey for my budget. Heck, I didn’t even find out about it until the advent of Discogs.com. I might have ordered it in 1987 if I had ever seen it in an import catalog. I had the money and inclination back then. Hearing it now, I still can’t believe that there wasn’t maybe even a US promo 12″ of this one, like there was for “Sex [I’m A].”

The extended remix was a pure, 1982 old-school 12″ version with several minutes of instrumental buildup before Ms. Nunn entered the song with that melody worth a million dollars. The mix was finer, as on the 7″ but it was the differences in the arrangement that made this especially sweet. Where the normal mix of the song would normally end, there was another minute or two left in the song for some new surprises. I especially liked how the synths faded out to make room for an unexpected guitar solo that if it was on the original mix, had been buried to subliminal levels. Then the synth tracks rejoined in time for a reveal of the session cold studio ending instead of a fade. Sweet!

It’s been a delight seeing Rubellan Remasters take albums I am big fans of like the Visage releases, and take them to their ultimate expression since none of the previous stewards of the titles cared enough to do so. The label can make a classic like “Visage” or “The Anvil” gleam like a platinum god on a pedestal goes without saying. But I’m almost more impressed with what they have done with what I [wrongly] considered at best a workmanlike product with serious flaws in “Pleasure Victim,” and turn it into a thoroughbred winner in ways I had not anticipated.

It’s true that my antipathy for just one song had colored my memory of this album unjustly. Blinding me to its many merits. I’d always held a torch for “Masquerade,” which is still my favorite Berlin song, but by being exposed to this album now, I can see I’ve been a bloody fool to discount a track like “The Metro” which I now [smacks forehead] can plainly see as classic material. In spite of the fact that I was perhaps the only one in the room who looked askance at such an admission for, uh… 37 years? I can now see this sitting nicely on the shelf with “Information” and appreciate the advances in production and songwriting [with one exception].

Of course it’s the thorough and detailed addition of seven bonus tracks, three of which I had never heard before that  make this CD compulsory. That they were superb remixes of the two best songs on the album sure didn’t hurt any. While I had asked Scott Davies about the possibility of including the 1981 1st M.A.O. version of “Tell Me Why,” one of my holy grail records, I get it that it was from the band’s indie period and therefore not party to UMG’s archive of Berlin masters. The inclusion of amazing remixes that were only available in foreign territories more than made up for that understandable omission. And of course, all of the cuts were given a mastering that sounded fantastic with full-bodied dynamic range that has made me a willing pleasure victim for the last two weeks.

This CD will be one of the label’s top sellers, and as of tomorrow it will be distributed widely beyond the label’s webstore in numerous places. You may even see it in the racks of a store that dares to stock the Hipster Kryptonite® that we love so well here! My suggestion? If any of this calls out to you, buy it now. This disc will sell out its initial run within weeks. Then more will be pressed and the cycle will repeat until the license has passed. And then copies of this will exchange hands for large figures. Why wait for the heartbreak? Just hit that button and buy it now from the label itself [max karma, of course!] and prepare to be amazed.