I am such a record store geek that I have a pile of bags that I have inadvertently “collected” from my travels. I have not saved every bag, but I couldn’t have helped noticing that quite a few have been filling the scant nooks and crannies of the Record Cell. Why not have a post with them since they practically constitute a collection of their own?

A budget effort from  the venerable Wax N’ Facts. They give a simple black on white T-shirt bag that has the benefit of being fully recyclable at any grocery store or curbside location. The old school clip art at the top was probably what they have been using since opening in the mid 70s. I’m not sure why the zodiac image is at the bottom, though. Possibly Satanic hippie influence? 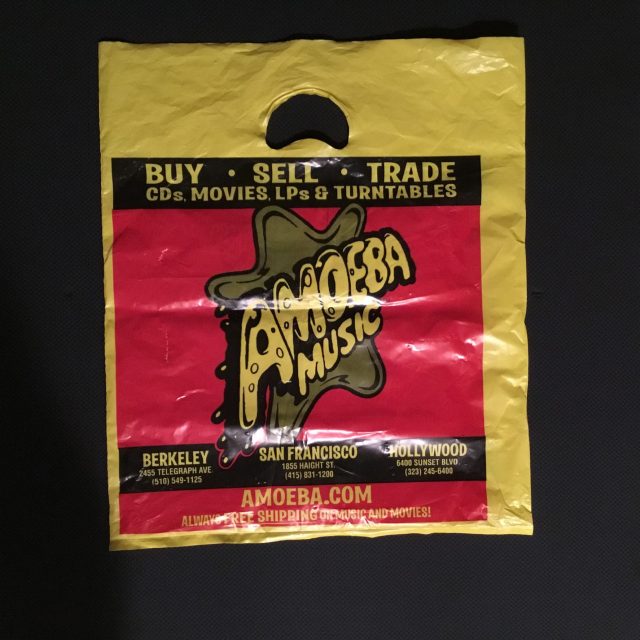 Amoeba Records really don’t have different bags for each location. I grouped this two color plastic carrier bad with their Berkeley and San Francisco locations simply due to the fact that I spent less at those locations than I did during my visits to the Hollywood store. If you spend under three figures, you can expect this straightforward branded bag. 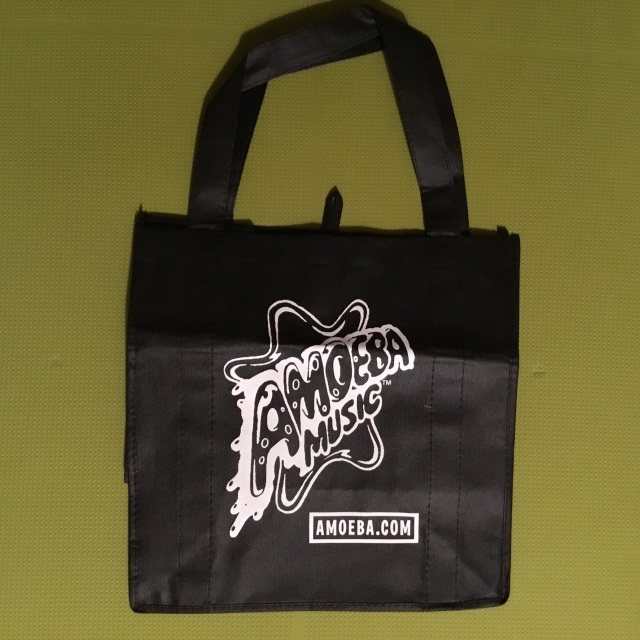 The “Executive Version” of the Amoeba carrier

Customers who spend more freely get the reusable recycled plastic tote bag should they drop more serious coin in the three figure range. The bag is still available to tourists on a budget, but they’ll have to pay a few dollars up front for the privilege. Not surprisingly, both of my visits to Amoeba Hollywood garnered me one of these bad boys as a courtesy.

The Groove in Nashville is of the “artisinal” record store variety, which is clearly reflected in the aesthetic of their carrier bag

The Groove was a newer store in Nashville, that clearly aspires to artisinal status. Note that their common kraft paper carrier bag was screen printed by undoubtedly the same shop in town that does gig posters: Grand Palace Silkscreen. The typical ironic retro imagery [very common to carrier bags post-1985-ish] was given a split fountain vignette here. Any bag might have a run of two mixed colors for a subtle, yet, lush effect as seen here. By the way – zoom in on that artwork [click it] and you’ll see the “Never Mind The Bollocks; Here’s The Sex Pistols” and “The Clash” album art among those discs on the floor. Can anyone else identify the other covers obviously dropped in?

Another yellow plastic carrier bag – what could it mean?

Hmm. It looks like Rockaway Records have been using the same bag art since 1979. Will this look be hipster ironique in 2029? Not much to see here. Move along!

Record Surplus might be using non-ironic art, though it looks remarkably similar to the bag for The Groove

I kind of like the frenetic imagery used on the Record Surplus carrier. I sort of gyrate like that when listening to records but not while seated in a mid-century modern plywood chair. This store is right in the heart of the neighborhood I was born in. Gosh! Too bad I moved away when I was seven. By the time I was really haunting record stores in my teens, they might have been there at walking distance.

Orchestral Manœuvres In The Dark 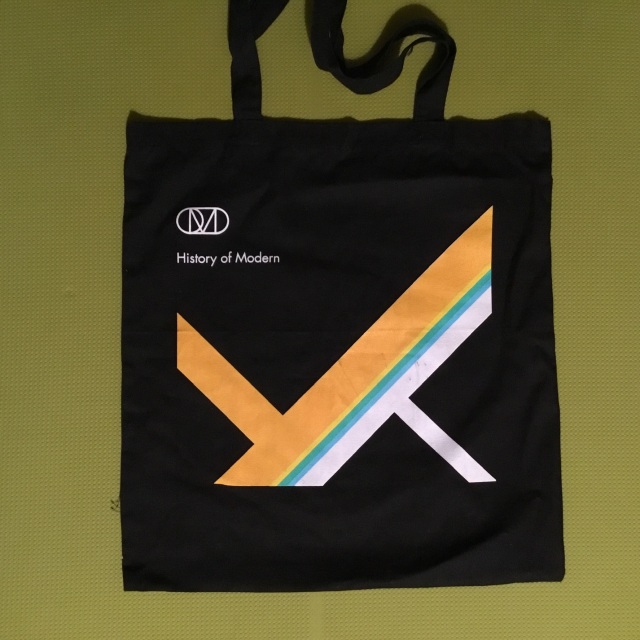 Technically a record carrier, this was what my US LP of “History Of Modern” came in when I did OMD VIP in 2011

Woah, daddy! When I plunked down for OMD VIP in 2011, the swag [including the US LP of “History Of Modern”] came in this full color, silkscreened tote bag with Peter Saville designed artwork. Since the LP was in this, this managed to get called a carrier bag,, though not affiliated with a store, per se. I use this one when shopping at Harvest Records during their legendary anniversary sales with stacks of $1.00 CDs from the basement. I always think that someone else might see it and say “wow, you like OMD too?” but it never happens. Does that make me a geek? [don’t answer – that was a rhetorical question]

Wuxtry Records has three locations and their carrier bag has some serious vintage irony happening that isn’t ironic at all. We all know that buying records used was the way to stretch your music buying dollars, and the artwork makes sure to get that point across with their mascot. This is simply a beautiful design for me.

The back tells you all you need to know about the Wunxty Empire, including Bizarro Wuxtry, their non record store shop that sells stuff that [thankfully] doesn’t take up space in their record stores! Would that all record stores kept their tchatkes that weren’t music under a separate roof and I’d be a lot happier!

That’s it for today. I’ll now save every bag that comes along going forward because what else can one do if we have The Collector’s Sickness as badly as I do?