Posted on September 20, 2022 by postpunkmonk

So, with the release of their third single, “Happy Birthday,” Altered Images were thrust into the funhouse mirror world that accompanies having a single that reached number two in the charts when their previous single [the lovely “A Day’s Wait”] couldn’t be bothered to chart at all. So the experiment with Martin Rushent producing was deemed to be a fantastic success. The right record at the right time for the right year! Naturally leading to him producing the entire next album. What could go wrong?

If a dour Post-Punk album like “Happy Birthday” can sell silver [60K] in the UK on the back of a single sugary-sweet morsel of ginch-pop, imagine the sales on a whole album of such tunes. Over a synthetic seaside slice of surf noise and seagulls, the title track to “Pinky Blue” began the album on a subtle note. The vibe of the album was clearly tipped off in the first minute as what sounded like Linn Drum hi-hats  frantically kept a steady pace as the jangling guitar bounced off of their steely discipline. The song rolled forward with an expansive energy that saw Ms. Grogan’s girlish vocal taking flight with some newfound power as she soared above the slightly fussy arrangement; winning me over with sheer verve. Even if this, the third single from the album, stalled at a number 35 in the charts

The first Altered Images song I ever heard was the remix of “See Those Eyes” and I was living the Human League’s “Dare” album in early 1982, I was fascinated to hear producer Rushent treat what was a pop band with the same aesthetic at the producer’s desk with Altered Images. While the band did have a keyboard player in Jim [Berlin Blondes] McKinven, they were still led primarily by guitars, even though the production style that Rushent was deep into as producer of the moment was based on the precision of drum machines and sequenced synthesizers.

The dub technique on Rushent’s dance mix of “See Those Eyes” could be mashed up with a record like the “League Unlimited Orchestra” album with nary an eyelash batted. yet the straight 7″ mix as the album provided was to these ears an unerring classic Pop tune. The programmed backbeats on the drums allowed the synth lines to float lazily overhead as the twangy guitar lines managed to capably unite the rhythm and melody into a satisfying whole. And Clare Grogan’s vocal was the glue that held it all together without any of the little girl tics that she often fell prey to. That this sterling single fell just outside of the UK top 10 at number eleven was something of a small crime as I find it one of the group’s best songs.

“Forgotten” was an energetic number that proved to be an excellent deep cut almost hiding on this album among all of the spun sugar candyfloss. I could respect its winsome pop the morning after. Which is more than I can say for “Little Brown Head,” with its oscillating two-note hook being just too forceful for its slim chassis to support.

Every time I hear the high-pressure conga groove the Linn Drum was providing for the intro of “See You Later” it always made me expect a completely different song. Once the intro was over and the proper song got underway, it seemed to fare a lot batter. That the song was a gloriously cheerful kiss-off was all the better. I loved how Ms. Grogan trilled in ecstasy in the song’s climax while the drums echoed her ebullience with some tidy fills, but her getting the last word on her final “see you la-terrrrr” was a little too close to the ending of the thematically similar “I Could Be Happy” for comfort on the same album as the latter. 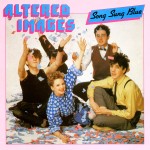 Next came the primary reason why this album only mustered a 2.5/4 ranking on the Rock G.P.A. scale. Because the band managed to include a painfully twee cover version of the already sappy “Song Sung Blue [#1 1972] that managed to make the Neil Diamond original sound like Joy Division in comparison. I recall interviews with Clare at this time commenting on how it was a favorite song of her mother but surely she could have just sung it around the home?

Instead, we got a bouncy, singsong rendition that seemed like it was made for a [condescending] children’s program. With a music bed that sounded like a Casio demo and featuring Ms. Grogan taking such extreme liberties with the phrasing of the melody that I can feel the cavities in my teeth happening on every listen. But the killing stroke was surely the appearance of producer Rushent and famed BBC DJ John Peel [yes, the John Peel… he was a supporter of the band] contributing a male chorus of backing vocals and whistling. This was the sort of track that could slay even a strong album, and this one wasn’t quite up to that level. That the resulting song seemed to last forever at a tooth-gnashing length of 4:14 [the second longest song here] was insult to injury.