Hilly Michaels was cut adrift when Sparks went to Europe to record two albums with Giorgio Moroder without a band. After their 1979/1980 releases, Sparks decided they wanted a band again, so they came back to The States and found a L.A. band that fit the bill as a pre-existing unit. Bates Motel consisted of of Les Bohem and David Kendrick with Bob Haag also on on guitar. Their sole release to their name before encountering Sparks was on a New Wave Sampler® released by Richard Perry’s Planet records label in 1980.

Wow! I remember seeing this on in the cutout bins all over Orlando from ’80-’84 and looking at it now, I was a fool to pass this up! I guess it was down to the design being New Wave generic at the time. Well, what else could we expect from Richard Perry? It’s a little confusing when Streisand’s producer “goes New Wave.” Bates Motel would be necessary but there’s also The Alley Cats, who really caught my ear in “Urgh! A Music War!” Then there’s the dB’s and an early recording of “Unable” by Suburban Lawns that is not in my Record Cell! My allegedly complete Suburban Lawns collection is meaningless without this! Bonus points for the marketing department to call it “new music” when it was still “New Wave;” about three years ahead of the curve!!!

So Sparks simple grafted on Bates Motel as their new backing band and recorded a five album streak with the band that saw them make their strongest inroads into the resistant American charts. But coincidental to this were the former Bates Motel recording their own music as the new rechristened Gleaming Spires. They got the brothers’ imprimatur and set out to record their own albums concurrent with their Sparks activity. 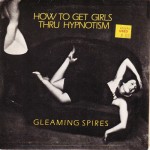 To date, I have only owned a single Gleaming Spires release. I must have bought “How To Get Girls Thru Hypnotism” up to two decades ago. Like many records, it has sat unplayed on my racks, until last night. I gave it a spin and wow…! I bought it expecting Sparks-lite® but what was delivered was much darker, fully synthetic Technopop. I was immediately taken by the fact that “drummer” David Kendrick was patching synthesizer loops for rhythm with nary a drum or even a drum machine in sight on the A-side! These guys were really staking a claim where few chose to tread. Then and even now. Only the Elka string synth sounded like traditional sound. Everything else here was modular units!

I was also amazed that the tone of the record was far, far darker than I expected. “How To Get Girls Thru Hypnotism” sounded like a jokey lark on its face, but it sure seemed to be irony turning into self-laceration by the midpoint in the song as Bohem [who reminded me of Todd Rundgren, actually] modulated from his self-effacing voice into something close to Freddy Mercury as posessed by Satan as the façade crumbled. To be willingly lied to in their barren life as the backing vocals chanted “lie…lie…lie…lie” to the methodical tempo.

The B-side, “Walk Right” sounded strongly redolent of Todd Rundgren’s “Healing” album of similar technopop from the same year. The middle eight on “Walk Right” devolved into a chaotic police radio report. Possibly from the scene of a murderer. Serial murder, guns and sharp kitchen knives were all evoked in the disturbing lyric. The nascent production by Stephen Hague, was probably among his first outside productions, but it showed a facility at taking anguish and machines and producing something close to pop from the resulting collision.

After the band ran its course, David Kendrick [as we all know, right?] became DEVO’s drummer when Alan Meyers left. We all appreciated Kendrick for allowing the surprisingly decent “Total DEVO” to exist. We won’t cast any blame at him for “Smooth Noodle Maps.” Les Bohem has gone on to follow in his father’s footsteps as a screenwriter, but I’ve not seen any of the properties he’s worked on [though “Twenty Bucks” – adapted from an unsold script his father had for decades – sounds interesting]. The band have three albums and a few EPs that need my attention. Give me 5-7 years and I may be ready to discuss these.