I remember hearing Rachel Sweet first on a local radio show called The Import Hour where the DJ played the live B-side version of “Wildwood Saloon” which was the flipside of her then brand new single, “Baby Let’s Play House.” She was just a blip on the New Wave radar for me. but as time marched on from the late 70s into the late 80s, I already began to sense the amount of things I had missed the first time around, so i picked up a cheap used copy of the US version of “Fool Around,” Ms. Sweet’s debut album in The States on Stiff-Epic. I never got around to playing it before Germany’s Repertoire Records in 1991 issued the album in its longer, original UK version [two songs had been cut] along with three rare tracks from singles and compilations. I just ordered that through the ubiquitous Sound City 2000 catalogs I spent so much of my paychecks back then on. 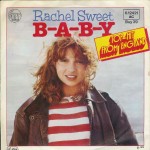 The album got off to a brilliant blast of glorious pop with Sweet’s hit cover of Carla Thomas’ “B-A-B-Y” [as written by Isaac Hayes and David Porter]. It blasts out of the disc like rays of sunshine with Sweet’s brassy voice complemented by the tight four piece horn section. The teenaged singer didn’t modulate anything here. She was already a showbiz veteran who simply belted away to powerful effect. Pietro Nardini got the room for a great guitar solo in the middle eight but at the rend of the day, the song was all about the pipes on Ms. Sweet. And rightly so. 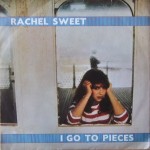 Since Sweet was not a writer, there were a lot of covers making up the album. Del Shannon’s “I Go To Pieces” was another cover single with a finely etched if ultimately MOR arrangement lets me down on the sax and string section. The writing that ultimately gave this album its idiosyncracies was down to producer Liam Sternberg. He crafted an eclectic program that allowed Ms. Sweet to show off all the chops she had developed at a tender age. “Who Does Lisa Like” was a much more contemporary song with a skittering, New Wave energy tackling a familiar tale of teenaged jealousy. Rachel also sang great backing vocals on the album and she harmonized wonderfully with herself here; staying somewhat flat and bratty on the leads while adding sweetness and contrast on the BVs.

Sweet had spent her childhood eking out a career in Country so Sternberg wrote a great country ballad for her in “Wildwood Saloon.” The strings here almost prepping one for full on Chamber Pop before the song got underway and played its Country cards. It’s hard to believe no one had covered this song later on as it has the sturdy feel of a standard. Maybe it would be a good one for The Countess of Fife to tackle one day?

Dusty Springfield’s “Stay Awhile” had Sweet dialing back the brassiness in her voice since she needed to go in a different direction to the Springfeld original. Spectorish drum tracks and string synths gave it a different spin. The guitar riff leading into “Suspended Animation” sounded like a cop of Blondie’s “One Way Or Another” riff, but since both albums were released in 1978 [and I don’t have dates] it could be a coincidence. But once the baritone sax joined in it was clearly another beast entirely. The quirky verses were given a catchy, yet haunting chorus. Ms. Sweet sang it with her patented Country twang in her voice while the delicate BVs were something else entirely.

The spare tropical Reggae/exotica of “It’s So Different Here” was an example of this record at its beguiling best. It didn’t feel like much else out there in the 1978 environment. And the vibraslap panning from left to right was a real kick. That it was followed by the most eccentric song here was a mild shock, but “Cuckoo Clock” was the surreal, far horizon of this album’s songs. The lyrics and storyline were berserk and I’d swear that Sternberg was hitting the psychedelics when he wrote this childlike, but sinister scenario. Still, I had to love Lene Lovich guesting on backing vocals and fitting in [appropriately] one of her trademark cinematic screams for good measure.

Another roots check to Country Music had Elvis Costello’s great “Stranger In The House” being covered to a fine standard. The pedal steel guitar and Ms. Sweet’s voice were made for each other. The concluding “Girl With A Synthesizer” was a jaunty number that invented cow punk on the spot with its tale of a singer who switched her allegiance from banjos to modulator rings. Five years later Rubber Rodeo turned this into a genre.

The CD had a trio of bonus tracks as well. “Truckstop Queen” could have been another Country number, but it favored low key rock as its modus operandi. “Tourist Boys” picked up on the Reggae thread of “So Different Here” with a nimble skanking guitar line and Sweet’s multi-tracked vocals dancing around it. And finally,, like many Stiff acts of the era, she covered DEVO’s anthem for the label, “Be Stiff,” but here the herky-jerky tune was completely overhauled into a Country Swing with maximum twang. The lyrics were completely different from the rude song we all know and love apart from the familiar chorus. The final, self-referential verse was a hilarious kicker to the transgressive cover.

When I folded my wife’s record collection into our mutual Record Cell, I was pleased to see that being an Akron-born lass herself, she had an import UK white vinyl copy of this fun debut album probably decades before she ever ran into me. It’s a strange little album with New Wave, Reggae, and Country thrown in the the blender with no frets at all over the end result. Through it all, Ms. Sweet sings it all like she owned it. Either lilting through the material like a warm summer zephyr or belting out the songs with a power that belied her tiny frame.

After four albums with no breakout hits, she drifted out of music and only re-emerged when picked by John Waters to sing the theme to his hit “Hairspray.” But that seemed to be it for Ms. Sweet. She tried her hand at acting only to find that it was writing and producing that was her real interest. The last 25 years have seen her working in TV, so I have no idea of what she did. [I stopped watching TV 28 years ago]

I think I have a copy of “Blame It On Love” from the garage sale days but given that it came after her semi-hit version of the chestnut “Everlasting Love” as a duet with the dippy would-be heartthrob Rex Smith, I never spun it. I might be persuaded to pick up “Protect The Innocent,” her second album for Stiff, though. I can imagine buying any album released by Stiff on principle.