Record Review: The Chameleons – “What Does Anything Mean? Basically” UK CD [part 1]

I first heard The Chameleons on college radio in 1983 when I was taken with the material I was hearing from their “Script of the Bridge” album. “Don’t Fall” and “Up The Down Escalator” sounded like what U2 wished they were doing; actual Post-Punk guitar rock with some blood in its veins. U2, as I’d heard them from 1982 onward, just seemed like tourists in this art space. Meanwhile Mark Burgess sang it like he meant it and the creative twin guitars of Dave Fielding and Reg Smithies sat comfortably in the Post-Punk toybox as defined by John McGeoch with echoplex and delays being used to amplify the band’s penchant for moody atmospheres.

Though the band was, for my ears, a necessary respite from the curse of too many synthesizers, the synths are in the mix, even though the albums do not have specific credits for them. But they were a minor note in this band of Post-Punk Rock. One that flirted with Gothic sounds if not specifically in lyric imagery. Their vibe was congruent to the dreamy, neo-psychedelia of certain Bauhaus tracks or “Kiss In The Dreamhouse” era Siouxsie + The Banshees; which pointed once again to McGeoch. But this sophomore album disarmed by opening with a brief ambient instrumental, “Silence, Sea And Sky,” which was all synths.

That all changed once the driving yet dreamlike “Perfume Garden” got underway. The drumming by John Lever was decidedly motorik in style, though the guitars were split between lyrical phrases and an atmospheric haze of sound that in other bands would have been relegated to synths. But with two guitarists they had strings to spare. Listen.

“Intrigue In Tangiers” lived up to the premise of its title as the song stepped into the spotlight with seashore foley sound effects and gentle acoustic guitars eventually giving way after 45 seconds to the more typical heavier drums and guitars. At least until the point where the acoustics returned with a vengeance and held sway until the song’s finish.

The intensity went further than just “intrigue” on the more forceful “Return Of the Roughnecks.” The darkly cinematic vibe showed the album at the flashpoint where it went from smouldering to fully aflame. The thunderdrums were pummeling in their motorik fury and the guitars managed to bite even as Mr. Burgess unleashed his full angst on the indignities of the time. Which, after 36 years, remain with us still.

You want to climb

But when you try to climb

You see the ladder getting shorter

You want to drink

But when you try to drink

There’s someone pissing in the water

Return Of The Roughnecks 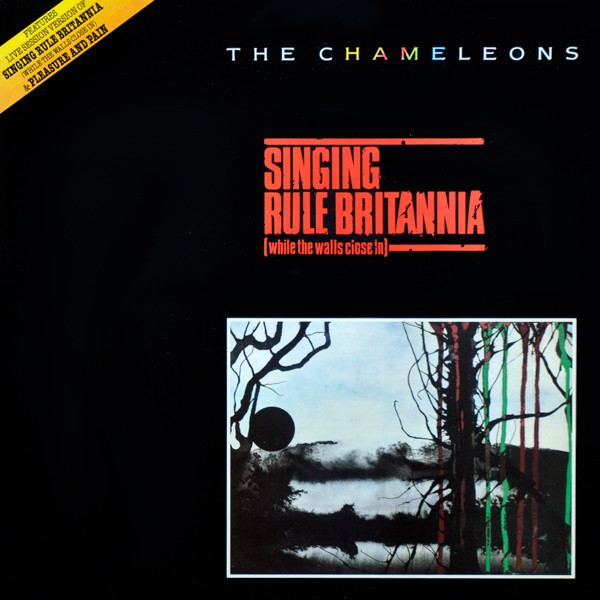 There were only two singles from this album period and “Singing Rule Brittania [While the Walls Close In]” was a dreamlike swell of guitars as the beat faded in to the intro here. The track coalesced into a paradoxical sound that both surged forward and remained locked in stasis as the rhythm guitar descended on the downbeat and the harmonic guitar rose on an upbeat. Burgess’ bass got space in the mix to step out between these extremes on the middle eight. It sounded more like a deep cut than what one would expect for a single. Perhaps its simplicity of construction led to it being chosen as a single.

Comparatively, “On The Beach” sported a stronger, more developed melody while still offering a sound that didn’t stray far from the band’s target of a bruised, world-weary melancholy that still carried the seeds of defiance within. That Burgess managed to have his singing hit rare major keys in the song’s climax was the biggest surprise on this consistent sophomore album.

Next: …Of Flesh + Hearts

16 Responses to Record Review: The Chameleons – “What Does Anything Mean? Basically” UK CD [part 1]