Disc three was an update to the disc number two from the 2008 DLX RM. The earlier collected a few unissued tracks along with B-sides, 12″ single only tracks, and a few rehearsal live cuts. This edition added the two 7″ edits of the two A-sides that featured them,, and two more live performances, as taken from the pair of videos that Chrysalis filmed at the St. Albans show [more on that later] to promote the band.

It started off with the “early version” of “Sleepwalk.” I was surprised to hear this in 2008. Legend had it that the band recorded “Sleepwalk”‘ with Conny Plank to final standard instead of a trio of demos to cinch the Chrysalis deal. Except for that’s not really the case.As we hear here, they recorded a tight, professional version of “Sleepwalk” that was nevertheless a bit different from the version they ultimately released. To me it sounds like an early mix with the same performances just re-jigged for the album. One huge difference was in the distinct BVs that whispered “Sleepwalk!” in the most threatening way possible. The early version featured more robotic, unemotional vocals, treated with effects. It almost sounded like a Speak + Spell with a hint of voice synthesis. I’d swear 90% of the performances here were identical, albeit mixed and EQ’d differently. 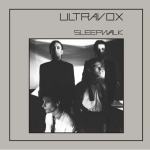 The B-side to “Sleepwalk” was the dense, and psychedelic “Waiting” which was quite a different vibe on this one to the mostly urgent rock of the “Vienna ” album. This one was more of an Eno-esque mood piece than a tight song, but the atmospherics went on for days here. The slow burning intro was dreamlike but tightened up once the militaristic tattoos of snare drums [quite atypical for Warren Cann] and wailing guitar licks weighed in. White noise crash pads made sure no one was nodding off. The varispeed effects in the long, almost psychedelic fade, sounded like music that probably should have happened under the aegis of noted psychedelia fan John Foxx, rather than under the new regime. Two years later Foxx would use some of that technique on his first version of the “Endlessly” single. Overall, this is just what we want from a B-side. An experiment that while of interest, would not really fit into the album, yet clearly deserved a listen.

“face To Face” was a variant on a piece that the band had demoed called “Sound On Sound.” They had recorded it live at St. Albans and it’s a deep dive into the Krautrock influence on the band. The long piece had three distinct “movements” and the long 1:45 intro was pure Neu! The bulk of the song was very light on keyboards. Instead, Chris Cross’ bass guitar was to the fore for a change. Midge Ure joined the song as it moved forward to “movement 2.” Ure also played bass guitar here in a Spinal Tap moment, became more prominent in the arrangement and past the midpoint, Billy Currie landed for a full on solo on the ARP with his trademark pitch bending. Afterward, Currie’s keyboards were more prominent in the mix with various filigrees happening before the spectral “3rd movement” ended the song. Motorik drumming ended but clockwork rhythms and white noise percussion, like distant thunder carried the song to its solitary ending bereft of any guitars or vocals.

“King’s Lead Hat” was another live cut from their summer 1980 shows; this time from the next night at The Lyceum, though segued tightly into the applause at the end of “Face To Face.” This was a rollicking Brian Eno cover of the song whose anagrammatic title was Eno’s tribute to TVLKING HEVDS. From the sound of it, this was one of their encores as they were light on material as they only played a few songs from the Foxx era. The band stormed through it, with Ure’s vocals filtered throughout that let the heavy rhythm section fight it out with Ure’s guitar and Currie’s keys for dominance. And it was interesting to have two non-LP B-sides being live only tracks. Going forward, any live cuts on B-sides would be familiar material, so we were lucky to get this early on in the band’s new phase. An unexpected treat.

The 7″ edit of “Vienna” merely shaved off the faded segue from “Western Promise” by about ten seconds. Having the UK hit 7″ edit here is thorough, and good thinking, but the brutal 3:56 edit that US Chrysalis made to the song [which I’ve never heard] only figured on the clear vinyl LP box version of “Vienna” and there’s no way I was paying $72 more to hear that! I can pick up the real thing for comparative chump change on Discogs.

The single’s B-side, “Passionate Reply,”was built on a rhythmic foundation that suggested the same mortar which “The Thin Wall” would soon be built from. The sequenced synth bass rhythm was punctuated by handclaps from a ClapTrap while the synth leads were slurred to offset the tight rhythms. Midge doubled his lead vocals on the chorus at split octaves [an old Bowie trick to fatten the sound] and Billy bent the pitch on his ARP solo as Midge joined in vocally on the melodically expansive middle eight, which featured wordless expression vocals. Marking this as a definite unfinished song, and thus a great B-side candidate for a quick one day session while on tour in America when Chrysalis says “we need a B-side for “Vienna.” They cut this one producing themselves at Criteria Studios in Miami; the Bee Gee’s platinum-plated studio. I liked the increase of tempo at the fade as the track entered the room delicately, but left urgently.

“Herr X” took the obvious debt to Kraftwerk via the arrangement of the earlier “Touch + Go” to its ultimate conclusion. Warren Cann had the idea to get Plank and his wife, Christa Fast to help him translate the song to German for an added kick. The track was not remixed, just re-voiced.

The 7″ edit of “All Stood Still” was a good 44 seconds shorter. It sounded like a slight remix to these ears as well. The B-side was “Alles Klar.” An atmospheric instrumental, made with Conny Plank co-production, so it’s actually from the “Vienna” sessions and not a later track recorded afterward for a B-side release. Warren Cann did the rhythmic breathing and said he had nearly hyperventilated by the end of the five minutes of recording. He goes up and down in the mix but he’s there all the way through, if you listen! It’s a mood piece; perhaps underdeveloped for its length and relative lack of complexity. The Philip Glassy repeated synth figure lent the track a sense of frozen stillness even as the other elements [guitar distortion, drum machine, synth leads] kept adding to the mix. So I think that aspect of the arrangement made this one seem longer than it was. I like the deep bass synth “foghorn” that periodically cropped up. Hence the title.

Added to the 12″ only single of “All Stood Still” as a bonus track, “Keep Talking” was a rehearsal cassette track which showed the band developing by jamming live. A peek “under the hood” as it were. One distinctive thing here was the repetitive bass sequencer line pointing the way to what was just around the corner for the band; the sound of their next single, “The Thin Wall.” In fact, one can sing the lyrics to “The Thin Wall” over this backing track quite easily. The other distinctive thing was the weird synth sound that they could not find the patch for again that sounded like strangulated articulation, or the “talking” of the title. Their reference to “Torque-ing” on one of the 12″ single sleeves in the UK [the other had “Keep Talking” as the title] was another veiled reference to the original title of the “Vienna Album” in the planning stages as “Torque Point.” Beyond that, there was not a whole lot to see here folks. A perfunctory 12″ bonus B-side that may have been better left unheard.

The band’s first 12″ remix was for “All Stood Still.” A bit late to the game by spring of 1981. But still ahead of the pack. The song added 44 more seconds in a intro buildup and the overall mix sounded like it was the source of the 7″ remix edit.

There were two soundcheck recordings that were from the Lyceum show that “King’s Lead Had” had been taken from. Chrysalis had recorded both the St. Albans and Lyceum shows on the band’s first tour. But these soundcheck performances were kind of perfunctory. “Sleepwalk” was close to being a decent quality recording. The whole band was in balance and it’s still a great song that wastes no time. I can’t say that for the soundcheck of “All Stood Still.” The cavernous sound barely had Ure’s vocals or guitar audible. But it did put the bass/drums.synth foundations of the song to the fore. At one point you can hear someone call for “more vocal.” Did we really need to hear this? But it was in the 2008 remaster so I have to agree that it should be here.

Fortunately, the new additions to this disc only of the video soundtracks for the live at St. Alban’s versions of “Vienna” and “Sleepwalk” [as seen on the DVD that came with “The Very Best Of Ultravox” CD+DVD in 2009, were much more interesting. as the songs in question were not yet stone cold classics; they were still feeling out how to perform them live, which is of interest to hear. “Sleepwalk” was the more interesting of the two, as it was about 45 seconds longer for some extra riffing.