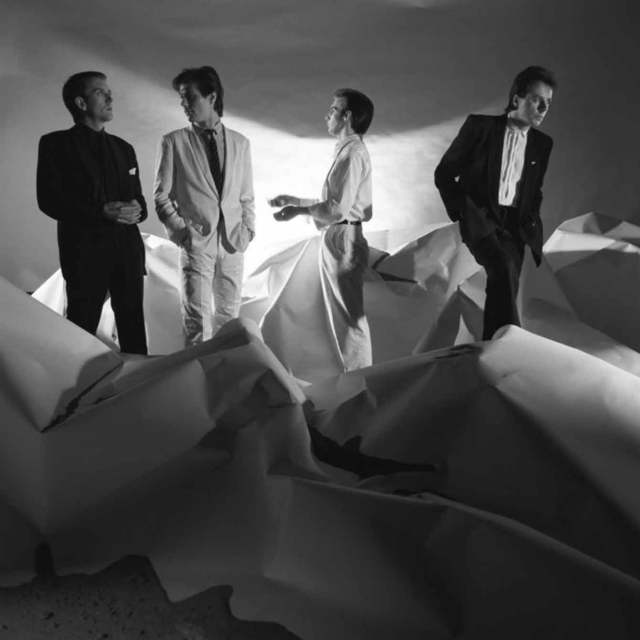 As a stepping stone to the 5.1 surround mix by Steven Wilson, first he had to make a 2.0 mix in his process to work from. Over time, these have been released to give old familiar albums an new spin since they had to be made in the first place on the way to a 5.1 mix. Why not put it out for added value?

Disc two had both the “Vienna” album and the B-sides as remixed by Wilson. We’ve heard three of the B-sides and an A-side earlier this year. And the early indicators have indeed played out in a remix that was largely sticking close to the original mark of the album, but taking slightly more liberties with the sometimes lesser known B-sides.

“Astradyne” has been very carefully re-created. The overall thrust of Wilson’s mixes tended to be a bit drier and flatter. He favored less reverb. Bass frequencies got a bit of a boost in his preferred EQ profile. Yet high frequency information was also lifted up from the mix. Given that Plank was recording with an eye towards vinyl, the Wilson mix sounded more capable to use the dynamic range of a CD. Stratified. Less squashed into the midrange bands.

On “New Europeans,” the EQ has tamed the aggression of Ure’s guitar skank. The echoes are no longer on a long delay, but his vocal has been pulled out of the mix to gain a little more spotlight. The vocal effects on Ure in the middle eight have more distinctly different treatments for each of the lyrical couplets he sings. The effect on the Plank mix were almost barely noticeable in comparison.

Details like the distorted  scream that was mixed into the fake cold ending on “Private Lives” were separated out of the mix with a slight hesitation that made them stand out slightly more in relief. It also sounded like noise reduction had been applied to the multi track masters as the slight tape hiss as heard on the Plank mix was now gone.

My Ultravox vector of infection had a few noticeable changes. The drums were slightly less prominent in the soundstage. The bass guitar of Chris Cross was given more spotlight. Midge Ure pick scrape in the intro ended more coldly. I could hear the rhythmic cello-like synths in the chorus much more prominently. I’d never really noticed them in all of the earlier listening to this album I’ve heard at least a thousand times, but they were there. Buried in the mix. The most dramatic difference here was that the delayed sequencer riff in the godlike middle eight now entered a half-beat early in the mix. Making for a dramatic shift of energy.

We’ve already covered the differences in “Sleepwalk.” Paradoxically, there seems to be more reverb on Billy Currie’s lead violin in the long intro to “Western Promise.” The berserk drum rhythm in lockstep with the sequencer  has been accentuated. More critically, Ure’s interjection of “Hai!” is now flash panned from right to left channel for a wider dispersion. As with vocals in general, Ure has more spotlight in the mix.

The bass synth drone at the segue between “Western Promise” and “Vienna” has been lengthened. The depth of reverb on the famous white noise beats on “Vienna” have been decreased. Midge Ure didn’t enter the song for another six seconds. but his vocal sounded less strident. Small timing differences like these are the biggest changes that a listener might pick out.

The lack of reverb on the delayed synth sequencer on “All Stood Still” ultimately served to strip the song of its sense of enervated urgency. It’s the most problematic mix here for the album. Wilson’s penchant for a dry mix had not alienated me in listening until now. Of the B-sides, I have already spoke of how I enjoyed the trippier mix of “Waiting” and have also covered “Alles Klar.” Inasmuch as Wilson’s traits of dryness and clarity worked to the detriment of “All Stood Still,” I thought they enhanced the clinical “Passionate Reply.”

As a whole, the Wilson 2.0 mix of this material was more spacious and less compressed into a midrange package. The frequency range of the music was aired out, and stratified, with enhancements to both the low and high end. The use of NR here was something that one could quibble with. I think it’s part of the “grain” of the recording, and as such, was an intrinsic component of the sound, but I’ve heard worse abuse of the technology. The end result wasn’t as airless as what I usually hear from Jon Astley, who usually makes the album sound lifeless.

As seen through an overall lens, this CD was about 90-93% of the “Vienna” that you would remember, and took few liberties that would cause an eyebrow to raise in alarm. Was it necessary? Well, as a means of making a 5.1 mix, yes. But in the overall scheme of things, it remains a curio and at the very least, not an abomination. You could play it and but for the occasional timing adjustment, one might not even know that it was a different mix as background music. I will admit that the mastering here was the most pleasing to my ear as it’s the one mix/mastering of the music that was made specifically for CD. It had a full dynamic range and was designed to be easy and pleasurable to listen to with no compromises made in the chain of production at any time. And I appreciate that all of the B-sides were also accounted for here. This was shaping up to be a thorough and well thought through project. And with none of the technical and production errors which are depressingly common in this modern era of  egregious quality control.