six discs is a lot of ground to cover

Let’s continue our examination by delving into disc one of the set; the 2020 remastering of “Vienna” from the original Conny Plank 2-track mixdown. We have already discussed what we think of the music. It’s a classic in our personal canon.What we want to know here is how the mastering of the disc stacks up against the history of the title. Fortunately, I have [as far as I know] every mastering of the title over the last 40 years. At the very least I have six, very differently mastered CDs that we’ll look at in some detail, with all important wave forms and spectral analysis graphs. Starting with the very first CD of the title.

The 1983 mastering is not very loud, but has a full dynamic range. Also, the master tape was only three years old. >click for detail<

The baseline 1983 1st remastering for CD is pretty tepid like any other title at the dawn on the CD era when engineers were flying by the seat of their pants and had not worked out just how best to master for this new and very different medium. The dynamic range is all there, but you must really be aggressive with the volume on your playback to get any impact out of it. It sounds thin and a bit brittle. But the album peaks at around -14 dB! So it doesn’t sound bad, just weak. There’s almost sibilance on the vocals…it’s right on the line.

The sound had new EQ and compression applied here for more kick. >click for detail< 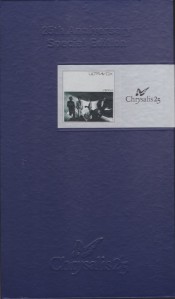 In 1994 Chrysalis UK released a special series of 25 significant albums to celebrate the label’s 25th anniversary. These albums came in a unique and sturdy, Chrysalis blue longbox that was sealed with a silver sticker showing the album cover. The Chrysalis logo was embossed into the lid of the longbox. As an Ultravox geek with a policy of buying any Ultravox record that I saw [whether I needed it or not] I knew I had to mail order one of these. I was interested in hearing if the title had been remastered. The original I had for 9 years was really thin, as we saw earlier. The jewel box was solid blue plastic with a small sticker of the cover art on the front cover.

This edition had enhanced bass at the expense of some scant high frequency information that, if you’re my age, you weren’t hearing anyway! Overall, an improved and more balanced mastering. The drums sounded better and the EQ and moderate compression made for a more pleasing overall sound, more vibrant without being uncomfortable to listen to.  It peaks at around -9 dB. I heard what sounded like “cello” synths in the chorus for the first time of listening to “Passing Strangers” [the text track] with phones on. But there were still near-sibilant “esses” in the vocal.

The 1st DLX RM with bonus tracks had some hard hard limiting applied. >click for detail<

Ouch! The first DLX RM of “Vienna” with B-sides [and the “Vienna” video in QuickTime format] was a budget line release in 2000 and the 20th Anniversary edition with a clear hype sticker. It was the best looking edition of “Vienna” yet. Extreme Voice designed the booklet with photos and full lyrics for the first time. But it’s not the best sounding edition of “Vienna!” Hard limiting has been applied to the sound and those drums are starting to sound like firecrackers. It is too harsh for headphone listening. The sound levels peak here at around -0.5dB. Vocals still showing signs of sibilance. 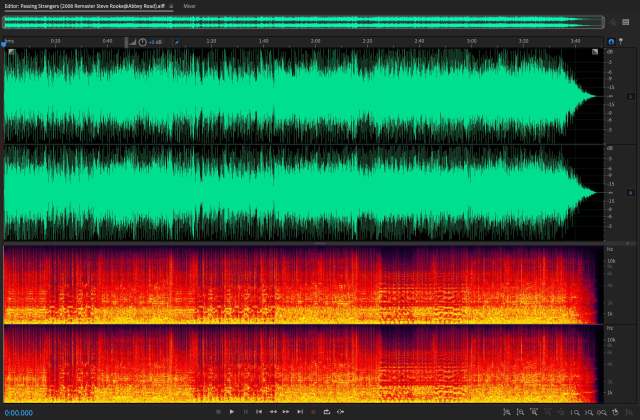 2xCD version with less compression but just as loud at 0 dB. >click for detail<

In 2008 the “Definitive Editions” of the Ultravox canon were released in 2xCD sets in O-cards. These had the original album plus a bonus disc of supplemental material. Thorough. But ultimately even louder than the 2000 version, with peaks at 0 dB. Another harsh listen. The EQ here eliminated some of the low end that made the 2000 version more palatable. Mastering was by Steve Rooke @ Abbey Road. The first mastering engineer credited for the work here. I disrespect it when I end up buying DLX RMs for the previously unavailable material and the original album sounds like junk, which is why it’s good to keep your early mastered CDs. Especially in the last 20 years.

The Conny Plank mix in its latest mastering was an improvement. >click for detail<

Alchemy Mastering have finally given the music some room to breathe in 2020. Peak average hangs around -6dB and at no point do any peaks come remotely near clipping. More low end has been returned to the music, which for analog, electronic rock music, sounds right to me. The EQ selected had tamed the worst excesses of the sibilance on vocals. A glance at the spectral graph reveals that the high frequency info has been rolled off above 15K, but this was a step back in the right direction for this album. This or the 1994 mastering were the best you can hear of Conny Plank’s production of “Vienna.” But we aren’t finished yet.

Steven Wilson’s mix has the best mastering you’ll probably hear for this album. >click for detail<

The Steven Wilson 2.0 mix had the most enjoyable mastering of the “Vienna” album out of all of the ones in my Record Cell. It was a warm, rich sounding mix with compression applied with the lightest of touches. Notice that the waveforms peak at about -6 dB, with even the highest peaks just at -3 dB. The wave as shown here has as much dynamic range as the first mastering, but with the added power that the 1983 mastering lacked. A look at the spectral analysis shows that all of the high frequency information that was lost to EQ settings on other masterings was fully present here. And since he had the multitrack to work with, Wilson has [thankfully] de-essed the sibilance. No longer to those consonants cut my ears like a digital knife.

So the history of “Vienna” in mastering for CD closely follows the overall history of mastering for CD at large. The initial, tentative steps to digital were unnecessarily meek at the hands of technicians who had spent their lives mastering for the very different beast of vinyl. The next wave of mastering hit an early peak while pretty much any mastering in the last 25 years could get very harsh as the dynamic range of digital music on CD was compressed down to a fraction of what the medium was capable of holding. And now, in 2020 the tide has turned back to sensible mastering techniques for the first time in a generation. Just in time for CDs to go away!

One thing I found very fascinating about the 1983 through 2008 masterings was that at the end of the track “Passing Strangers” there was strange noise at the end of the track after the music faded out with about noise and hum for about two seconds on each of the versions of that track. Some more pronounced than others, but none bereft of it. It came after the music faded out completely, so there’s no intrinsic reason why it had not been removed until Steven Wilson finally did it on his mix of “Passing Strangers.” I wonder if it was down to the gear/techniques that Plank had used on his mix of the album. And I wonder if it’s there on every track? To be found only with careful headphone listening?