Record Review: The Vapors “Together” UK CD Melts Away The Years Between Albums Two And Three 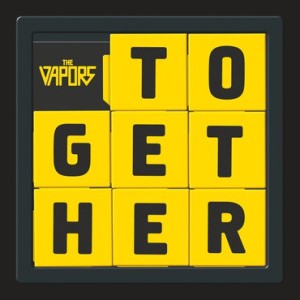 We just reviewed an album by a band that had not released anything since 1990, but there are some bands with even longer legacies apart. I got a delightful surprise regarding The Vapors twice this year. First, when we got news of their new album; their first since 1981 and the demise that year of the band. Then, on my birthday, one of my presents from the stalwart Mr. Ware was a signed CD of said album! Playing this album immediately showed that the band had not let any of their skills atrophy during their years pursuing paths other than that of The Vapors.

As the jaunty title cut immediately made apparent. “Together” was a snappy confection of New Wave pop that took the long view on a lifetime together with a partner from the perspective of …right now. The kids are grown and the times have not been easy but at the end of it all they were still a pair. The lurching stop/start riff that moved this one along was abetted by the bass of Steve Smith and the poppy BVs.

The pre-release track, “Crazy” we’ve talked about before. It’s a driving bit of pop/rock built around a tight, repetitive guitar riff from Ed Bazalgette that was strongly redolent of The Flaming Groovies approach to power pop. Not surprisingly Bazalgette cited that band as one of his big influences on the band bio page on The Vapors website. It fairly leaps off of the track and I’d say that they nailed the feel of that band expertly here.

For a slower tempo change of pace, the sumptuous “Real Time” could hardly be bettered. The gently strummed rhythm guitars pulled us immediately into the song where David Fenton’s measured, low key vocal revealed the paradoxical power of restraint.  He’s barely singing here; practically reciting the lyric, but it all sounded like a smooth riding car in low gear moving effortlessly forward.

While the songs so far had touched upon real life concerns from a definitely adult perspective, the relationships depicted thus far were not as fatalistic as on the haunting “Girl From The Factory.” As Fenton recounted his last meeting with the subject of the song, the constant refrain of “she seemed all right” only served to undercut the terrible loss that had occurred since that fateful time. The details on the lyric were knowing and personal, as if they had been intimate experiences. The Bowie reference had the ring of truth.

“So I walked her home, we counted stars
And she said something ’bout life on Mars
But I didn’t know if she meant Bowie or not
Cos she really loved him a lot” – “Girl From The Factory”

The backing vocals and acoustic guitars lent it all an aura of folk music, which is what it was as it reported on a tragedy in song form. At the song’s end Fenton was even breaking down in sobs and they used that in the song.

The guitars this album had been all over the stylistic map. From the punky riffs of “Crazy” to acoustics on “Girl From The Factory” and now “I Don’t Remember” was drenched in wah-wah effects that were all new to The Vapors palette. There was a willingness to do whatever it took to get the songs across here, and while some staked out new territories others were call-backs to the early New Wave of their past.

“In Babylon” featured subtle synth percussion effects of the sorts that were used lightly on “Magnets” as opposed to the more orthodox “New Clear Days.” The lyrics were built for today with pithy proclamations like this one.

It was certainly apparent that all of those years spent in law had not atrophied Fenton’s songwriting muscles any. He was always a thoughtful, mature songwriter for his age back then and time has not chipped away at his abilities any for the years spent away from music. “Those Tears” was as dignified and vulnerable a song of breakup and the hope of reconciliation as one could ever hope to hear. The driving rocker “King L” was on closer inspection, a fascinating [and surprising] tribute to the great Leonard Cohen; a now absent inspiration to songwriters everywhere. The Hank Marvin inspired solo from Bazalgette in the middle eight was quite tasty and a creative counterpoint to the otherwise urgent number. Fascinatingly, none of it sounded a whit like any Leonard Cohen song; making this a vivid and cliché-free tribute as well as a fantastic injection of adrenaline near the album’s end.

What a pleasure it was to hear The Vapors reconvene nearly 40 years later to make such engaging music that felt of a successful piece with their early work. And fans of “New Clear Days” and “Magnets” would find much to enjoy here. It helped that Fenton was always a strong songwriter with a mature outlook, as songs like “News At Ten” clearly showed ages ago. They had tried to reunite almost twenty years earlier, but the members were scattered far and wide back then. So it was second time lucky, with Steve Smith, Ed Bazalgette, and David Fenton able to pick up their instruments in 2016. Original drummer Howard Smith was a new father in 2016, so drums were the province of Michael Bowes this time. Fenton’s son Daniel also contributed [and fills in live when Bazalgette is off directing]. The production was by Steve Levine and almost all I’d ever heard from him were the tepid Culture Club hits, but a look at his CV on Discogs revealed that he produced a couple of tracks on The Creatures brilliant “Anima Animus!”  The sound here was warm, simple and direct, with scant technological filigree getting in the way of the songs and performances. It sounded like music, not software. The mastering by Tony Cousins was excellent with light compression giving a little punch while keeping the dynamic range open.

The Vapors were poised to continue on their live promotion when the album was released and the band had set up a 40th anniversary tour for “New Clear Days” but that’s pushed out until next year at this time; which feels a bit optimistic at this point, in all candor.

Given that 2020 has not seen the band caught up in a whirlwind of touring and promotion, we can take solace in the news that David Fenton has instead found the time ideal for writing some more songs. We can hope that there might be an album #4 one day.

7 Responses to Record Review: The Vapors “Together” UK CD Melts Away The Years Between Albums Two And Three