Record Review: Scritti Politti/Sweetie Irie – Take Me In Your Arms And Love Me UK 7″

Posted on September 17, 2020 by postpunkmonk

Wow. Last summer I wondered when I was going to ever find a copy of this single and in May I finally got my mitts on a über clean copy of the 7″ single. I’d have preferred a 12″ [or especially the CD5] but I would have still wanted the 7″ for the pop mixes of this non-LP single.  And a 7″ in the hand is worth a 12″ in the bush.

This was another pop song covered by Green Gartside with a Dancehall Reggae toaster adding counterpoint to the shimmering candyfloss that flows out of Green Gartside’s tonsils as naturally as breathing. I have to admit that I was not familiar with this Gladys Knight + The Pips song but did that really matter? This was another of the covers that Green had recorded with British Electric Foundation producing, presumably for the 2nd “Music Of Quality + Distinction” album, with the Stevie Wonder cover winning a berth on the actual album. Virgin issued the this single and a similar cover of The Beatles “She’s A Woman”  as non-LP singles [not associated with either a Scritti Politti or B.E.F. album] in the absence of any Scritti Politti material in the long lulls known to occur between their albums. 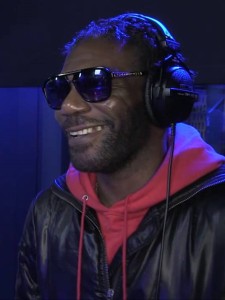 Sweetie Irie in the flesh

The synthetic backing was built from drum machines and swooping synths with a devilishly funky clavinet dancing amid the snare tattoos and bass programming. It had quite a sunny Carribbean bounce to it, and the gossamer multi-tracked vocals of Green were contrasted mightily by Sweetie Irie’s gruff toasting. In that aspect, he filled exactly the same function as did Shabba Ranks on “She’s A Woman.” Hearing this now puts me in the mood for Tom Tom Club and the mind boggles at the notion of a Tom Tom Club/Scritti Politti crossover. But tracks like this one would fit right in with their aesthetic, I think. The arrangement by Green and B.E.F. had all of the complex melody and countermelody structure that always made Scritti Politti records so stimulating. The B-side was simply an instrumental mix but playing the two cuts back to back with zero gap made it really seem like a 12″ mix with a long coda.

Looking back, I can imagine that records like this and “She’s a Woman” definitely pointed the way forward for Green Gartside, and maybe we should not have been so taken aback at him sharing the “Anomie + Bonhomie” album with rappers taking the spotlight. I have to admit, in 1999, I was entirely uninterested in the notion and when I got the “Tinseltown To The Boogiedown” US CD5, it spent an all-time briefest stay in my Record Cell before being recycled. Now, I look back on such knee-jerk reactions as hasty and ill informed, so I will be buying the fourth Scritti Politti album as well and any and all remixes of the singles. With the goal of the all-encompassing Scritti Politti BSOG⇓ eventually in my sights. Obtaining this fine single was yet another step on that path.

⇓ BSOG – boxed set of god: a collection of everything not on the albums by an artist

8 Responses to Record Review: Scritti Politti/Sweetie Irie – Take Me In Your Arms And Love Me UK 7″