Record Review: Cristina – Is That All There Is” UK 12″ 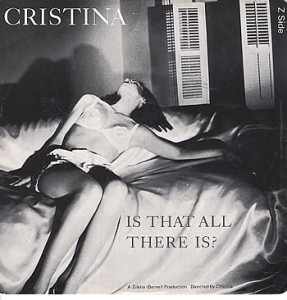 I didn’t find out about this withdrawn single until some time in the 80s. Certainly after the point in time when I had both of Cristina’s albums. But the legend that had grown around it was certainly vivid. It followed on the debut album from Cristina, and was also produced by August Darnell, who had done honors on the album. But while the “Cristina” album had included a Michel Polnareff cover version, that slotted without much effort into the flow of the album, which had been written by Darnell, this was a different cover version that was the first recording to bear the stamp of Ms. Monet’s pitiless aesthetic gaze. Having her artistic DNA in the mix was where the modern Cristina legend began in earnest. Unfortunately, the song’s ostensible writers, the esteemed Jerry Leiber and Mike Stoller were adamant that this record not be released any wider than it was, and used their legal clout to effectively ban the single. Which [rightly] became the stuff of legend. 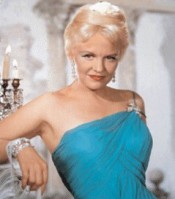 Anyone from my generation would be familiar with the classic [anti] pop song, “Is That All There Is?” It was a massive hit in 1969, reaching number 11 in the Billboard pop chart and a Grammy® winning smash on the back of Randy Newman arranging and conducting the orchestra. The cold-eyed lyrics [“adapted” from Thomas Mann’s 1896 short story, “Disillusionment” by Jerry Leiber + Mike Stoller] painted a bleak picture of modern overstimulation where nothing much managed to get a rise out of people any more. Cristina took the song as her template and had her way with it. Thank goodness.

She still started with the fire as a little girl, but this time it was Mommy who was the firebug. And a trip to the circus was replaced with an event with very different clowns indeed; a trip to a disco. The singer still fell in love with a wonderful boy with whom she walked along the waterfront, only this time he beat her black and blue while she loved it. The sound in her voice when she proclaimed that “I’d a’ killed for that guy…” was priceless in her heartfelt admiration. But then the guy ditched her, but she was callous enough to only ultimately wonder “is that all there is to love?” 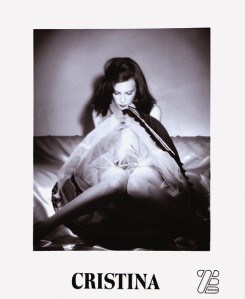 The road to Hell is paved with crinoline… Cristina promo shot

Cristina’s delivery of these words; spoken, not sung, as also on the earlier versions of the song, was an instance of her inhabiting the character of the song for the first time this fully. And the former drama student acquitted herself admirably. Her flat, and declamatory delivery was textbook Brechtian delivery. Which matched the Kurt-Weill-on-bennies arrangement that Darnell brought to the production of the music to a “T.” Darnell slathered on the irony with effects like slide whistles, champagne corks popping, cuckoo clocks, and in the psychotic middle eight, cut up party chatter suggestive of a breakdown. Meanwhile the tough cookie who was notably “talking at ‘ya” not “to ‘ya,” delivering these cold steel pearls of wisdom, was unflappable in the midst of it all decaying around her. Possibly due to her change of a lyric at the end which said “let’s break out the ‘ludes, and have a ball…” Leading the song to climax abruptly with the sound of glass breaking. An appriopriately brittle climax to such an emotionally shattered performance.

The astonishing power of “Is That All There Is” made the selection of an earlier song from her album on the single’s B-side all the more problematic. “Jungle Love” sounded like an overripe castoff from the first Kid Creole album. All Cristina could do on this track was trill and coo amid the thumping bass drums, vocal chanting, and cougar howls mixed into the kitschy, fondant iced layer cake of a disco tune. One that was a hair’s breadth away from toppling under a few too many layers. She truly sounded like an extra in her own production here with her girlish singing coming dangerously close to Marilyn Monroe burlesque.

The pity was that, as the A-side showed, she was capable of actually delivering so much more. The flip side song was the forge in which the mature Cristina ceased to be a puppet for her beau-label owner Michael Zilkha, and August Darnell, and became an artist. Telling her own stories in the most compelling of voices. Which, thankfully, would be the tenor of the rest of her career at Ze Records. Thankfully, the song can reach all and sundry ears 40 years later. Having gotten a full release as of 2004 as part of the reissue of the first Cristina album in the European version, called “Doll In The Box.” Alas, I only have this amazing song as a DL, but owning the 12″ single is a must and one day it should happen.

11 Responses to Record Review: Cristina – Is That All There Is” UK 12″