You have to hand it to Tony James. He saw it coming like a freight train and deftly hopped aboard and took the ride. The “it” in question being our ultracaptialistic future where all stimuli is amped up to a permanent state of “11” and the almighty dollar is the only measure of anything worth measuring. And now that history has proven him more correct than anyone else in the doldrums of the mid-80s, we heard see that Cherry Red have announced a 4xCD DLX RM of their incomparable manifesto, “Flaunt It” due on October 9, 2020.

I can’t help but notice that the real ads that were originally inserted between have all been removed from the album. Legally understandable, but their absence makes this album all the flatter for their loss. The conceit of selling ad space on an album in between tracks, was a brilliant apotheosis of the whole vibe the album was reaching for. Only having the place holder ads the band filled the unsold slots with is a comedown. But the plethora of remixes that accompanied the media blitz of the album was immense. Having them in once handy place is optimal.

As commenter negative1ne has mentioned in the comments to this earlier look at the album in depth, The full complement of mixes is not here. The band interview from a promo EP/cassette has been appended to the album and discs two and three contain 21 tracks. What seems to be missing? 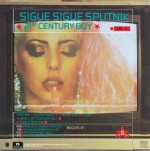 And since they went there with the Westbam Remix Short Version…

From this release. But personally, as Post-Modern as this band was, the notion of po-mo remixes like these just give off a stench to me I’d rather not detect.

That’s 14 more tracks, and given that many of them are 7″ remixes, maybe that would have represented a 5th disc. Where this edition really falls down is in not having a 6th disc featuring as much of the critical SSS video that they could have crammed on it all! I daresay that music video was where the project reached its ultimate culmination! That amazing video for “Love Missile F-111” belongs in an internet time capsule so that all future generations would be able to view it, regardless of location. But that’s not in the cards.

As someone who has the US album, I’m most interested in finding out whether this new edition would have all of the samples that were deleted/replaced in the US edition that I have. That might make for some real fun to finally hear 34 years later, but the lack of the real ads in the album flow are still a grievous omission. So I’m sort of on the fence about this one. But the price is a decent £19.95 for the 4-pak edition coming in October. If this calls out to you, by all means click the button.