This Prince Vault shelf clearly had masters of “Neon Telephone;” destined for The Three O’Clock – right next to “Pop Life Outtakes”

So the ante had been upped on “1999” Super Deluxe with a second disc of Vault Tracks. At first as these SDLX editions of of “Purple Rain” and then “1999” were released, I was assuming that Vault tracks were randomly by the Powers That Be  to make for a pleasing, if eclectic SDLX set, but the reality was actually that all of this music was contiguous to the period where the albums in question had been recorded. A vast and potentially dizzying array of music in a wide variety of styles had been put to tape, as Prince had by then, a professionally outfitted home studio to tinker in 24/7. And there was no stopping this guy. 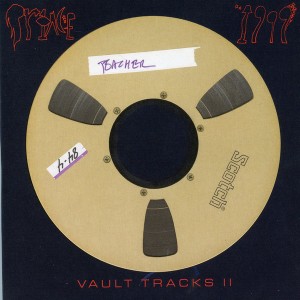 This disc began with a song I’d heard before in a radically different version on the Vault Tracks disc included with “Purple Rain.” This version of “Posessed” was leaner and meaner, with none of the diffuse filigree that dissipated the song’s energy into slightly jazz-inflected realms. No, this one was a full-bore Prince dance track, built on a repetitive Linn Drum beat with a pair of dueling synth riffs slithering through it all. The interest was easily maintained throughout the 8:46 length by the artist himself, who made sure we were never bored. Prince uttered “step on it” for effect to [non-present] drummer Bobby Z.  to keep the needle moving towards the red.

Up until about 3:45 it was the basis for a 7″ single, but the song of Prince’s erotomania began to break down and show the man’s state of mind as he drawled “I got this luuuust” in the earthiest manner possible before detailing in the breakdown how “f***** up in the head” this woman had him. He got pretty explicit at describing what’s at stake in the breakdown. Let’s just say that Tipper Gore would not approve. Then he circled back for the kill with some hot guitar solingo before the ice cold ending let us know it was time to move on. This was definitely the definitive version of “Possessed” to be had out there. This year, anyway.

“Delirious’ had always been a short, sharp Prince song around this time period. The hit single edit was well under 3:00. And the LP version wasn’t too much longer at 3:56. But it’s welcome to know that there was actually a long, 12″ single length version of “Delirious” at 5:59 to be finally had since there was [criminally] never a 12″ single of the A-side. It could have fit on the LP with the first two tracks only taking up about 11:22, but we now have the long version of “Delirious” that we’ve always wanted on “Vault Disc 2.” It’s fun to hear this and pick out the edit points for the LP mix. And its existence is further proof that Prince really was looking at an album of 12″ singles.

The previous disc had “Rearrange” which was a self-reflective funk song about trying to find his voice. “Purple Music” was another, much longer track, that looked internally into the question as it posited a new “Purple Music” that was a sophisticated new hybrid. And Prince’s sound this time could replace any drug he might care to take.

The groove was another repetitive, trancelike slipstream of Linn Drum with bass and scanty synths but the x-factor here was definitely the fruity licks of jazz guitar that were new to the Prince palette. His vocal was distant with hazy effects as he did sound intoxicated in his revelry. He kept the breakdowns and tonal shifts going for a long time. At the 8+ minute region, there was a psychedelic breakdown with Prince taking the role of a valet with crisp diction, drawing a morning bath for his charge before losing his bearings in the purple music swirling around him like an opiate. In the final minute the tracks finally crossed the line into jazzfunk with some bass and guitar interplay before the song abruptly evaporated on the jazzy guitar solo.

I’d heard about “Yah, You Know” and certainly lived up to the advanced billing. This was a gimmicky slice of New Wave Bop that sounded for all the world like DEVO performing a cover of The Standell’s “Dirty Water” [not a bad thought, actually] around the same time that they did cover “Working In A Coal Mine.” The metronomic, gridlike synths blared on a very close cousin to the classic “Dirty Water” riff while the glamstomp beat ignored everything else going on in the song. The jauntily mocking song seemed to be a portrait of someone Prince might have known.

I loved the phrase he coined to describe the “polyester punk to the bone. No wonder you came alone. We’re all grossed out ‘Cause you spit when you talk, Say yah, you know.” When the lyric described the loser sitting unemployed at home “watching television like a fool,” Prince wittily interpolated the Andy Griffith Show theme into the synth leads. The dead giveaway that this was a real guy the song was about came in the outro, where Prince imitated the space cadet in question with what was probably a real quote.

When Prince died in spring of 2016, the first posthumous track from The Vault was “Moonbeam Levels” which figured on the “Prince 4Ever” compilation. I had not managed to hear this one yet, but it really played like the best possible track that might have been a big hit from the “Around The World In A Day” album. It had that kind of stately trippiness to it with a complex piano ballad verse structure mated with a honestly anthemic chorus in a way that was still new to Prince’s output at the time. This showed that even while making what turned out to be his last New Wave/Post-Disco album blown up into 12″ singles, parts of his brain were already occupying the space that the album following his next one [or two] would come to inhabit. It could have honestly fit onto “Parade” as well! Prince was playing 3-D chess when every other musician was mastering checkers.

Next: …Vanity, Thy Name Is Prince?