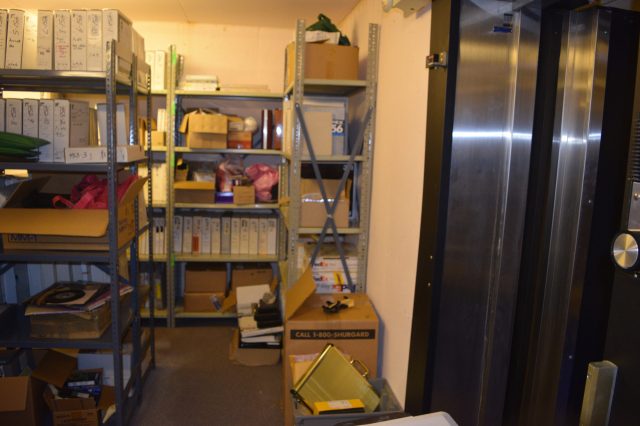 Inside The Vault, things could get a bit messy – not unlike my Record Cell. At least he had room for enough racks

We are halfway into disc three and we’ve finally hit a track that was less than compelling. “Colleen” was an scanty instrumental vamp [the middle name of his engineer, Peggy McCreary, by the way…] that was probably only destined to be a drop-in for another song in another time. It was a drum pattern with tight twin guitar riffing that built up pressure with no final outlet.

Much more fascinating was the first recording of “International Lover” where Prince with Morris Day on drums first recorded the now-familiar “1999” closing number with a nod to making it a song for The Time. As opposed to the surprisingly campier version he released, he played it close to the vest for a more naturalistic performance. Usually The Time were the outlet for his cartoonish side. It’s fun hearing the two musicians laugh while Prince delivered some of the notorious double entendres in this one. Prince’s piano playing here was mellifluous and ornate with outrageous glissandos appearing at the song’s midpoint. And I love how he and Day were laughing as he delivered the “please stay awake until the plane has come to a complete stop” line but quickly admonished “don’t touch the synths” and in the extended coda, instructed Day to carry on with the cymbals to bring the song to a lighter than air close. The tone of the song would be completely transformed later in his hands.

By all means the hot button, A-#1 prize on this disc was the appearance of “Turn It Up!” Though it was recorded in January ’82 with a few overdubs in May, one would be excused for thinking that this one was a lost classic from the “Dirty Mind” era! It would have slotted in perfectly with tracks like “Uptown” and “Let’s Work!” It sounded like Prince was crafting a very left field, clockwork-like rhythm on a modular synth. The synth bass jammed and Prince was all Falsetto Funk as he explored the radio as sexual metaphor. At a little over five minutes it felt like a tease. This bad boy needed to be at least 8:12 and it was originally destined for the album until Prince wrote “Delirious” with a kind of similar beat and that relegated this one to the dustheap of history… until now!

I had written about that Rockabilly EP Prince could have released? Well, “You’re All I Want” was the fourth track. This one was the only one of the three songs that was completely bass/guitar/drums with nary a synth. This one really felt like a crazy mashup of Little Richard and The Stray Cats with Prince all falsetto on us. It’s a joyful little raveup and more proof that the guy could do whatever he set his mind to.

The original version of “Something I The Water [Does Not Compute]” still had the quirky synth hook but was very more buttoned down from the released version. The piano playing was smoother and jazzier than the final version. The most dramatic change was in the restraint of the vocal delivery, with none of the paint peeling anguish that Prince brought to the vocal later on. Others might have recorded this and thought “job done.” It’s an accomplished, sophisticated cut with an excellent keyboard performance. Instead Prince re-thought the emotional basis of his vocal performance and made the very correct decision to push this one “into the red.”

Ever wonder what Prince might sound like doing Reggae? Wonder no more. “If It’ll Make U Happy” showed Prince not going too deep into those waters. This was a pop reggae; on par with something like Johnny Nash’s “I Can See Clearly Now.” Not “Exodus!” In a rare move, he had Dez Dickerson add vocals and guitar in the studio to this one for a less than 100% Prince experience. It’s a fun little trifle using a style that for the most part was alien to our experience of Prince.

There was finally the live second take of “How Come U Don’t Call Me Anymore?”  The same muted snare beat was there, but the vocal delivery was more soul and less gospel inflected, with none of the gospel backing harmonies that gave the released version such a good foundation.  This one sounded like it could have come from ’66-’68; a few years later down the pop music timeline.

NEXT: …Son Of The Vault